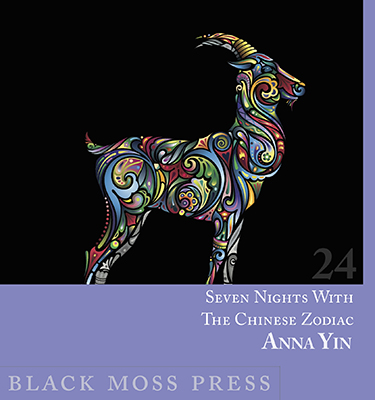 Seven Nights with the Chinese Zodiac

Yin weaves together images and mythology from both the Eastern and the Western worlds, creating a universe where the extraordinary is ordinary.

Anna Yin is a vivid dreamer. In her newest poetry collection, Seven Nights with the Chinese Zodiac, Yin weaves together images and mythology from both the Eastern and the Western worlds, creating a universe where the extraordinary is ordinary.

The first section, “Night Shades,” begins with a winter landscape, where Yin muses on despair and loss. By making a connection between tragedy and winter, Yin plays on the Chinese concept of yin (darkness) and yang (light), where the yin qualities of darkness and cold are believed to be most powerful on the shortest day of the year. But because yin and yang represent balance and harmony in life, everything must come full circle—light will always emerge from darkness.

Yin brilliantly takes the reader through the seasons of the zodiac year by intertwining Eastern and Western images. She alludes to Sylvia Plath, Margaret Atwood, and Dante—Western poets that influenced her own work—and incorporates them into pieces inspired by traditional Chinese poetry. The blending of the two worlds is congruent with the immigrant identity she explores in “Accent,” where the negotiation of two cultures should not result in one overtaking the other—like yin and yang, both exist in harmony.

This is masterfully shown in “Fatality,” where Yin plays on the Greek myth of Persephone, who rises above ground during spring—hence the fertility of vegetation—and withdraws into the Underworld after harvest, causing the harshness of winter. Yin paints a picture of pomegranate seeds “tickling red rivers,” a scene that echoes both the Red River of the North that ends in Manitoba and the Red River—also known as Hong Hà—that flows from China through Vietnam. Just as Persephone’s return brings rebirth and hope, Lunar New Year marks the start of the zodiac year and, more importantly, the start of spring.

The harmonization of images from the two worlds is a defining characteristic of many of Yin’s poems, and the title of her entire collection is no exception. The number “seven” is considered the luckiest number in the Western world, and has significance in Chinese culture since it represents Yin, Yang, and the Five Elements (Water, Fire, Wood, Metal and Earth).

The entire collection brims with bittersweet hope as the speaker yearns for spring and the return of her own Persephone, who will rise from the dark Underworld with cherry blossoms (instead of flowers) paving her way to the bright surface—“let light shine through,” she pleads. Yin’s poetry is captivating and breathtaking as it seeks ways to heal and move beyond the coldness of winter, searching for “an exit, a beginning.” In reading Yin’s work, the reader can do the same. As she quotes Mary Oliver, “poems are not words, after all, but fires for the cold, ropes let down to the lost.”