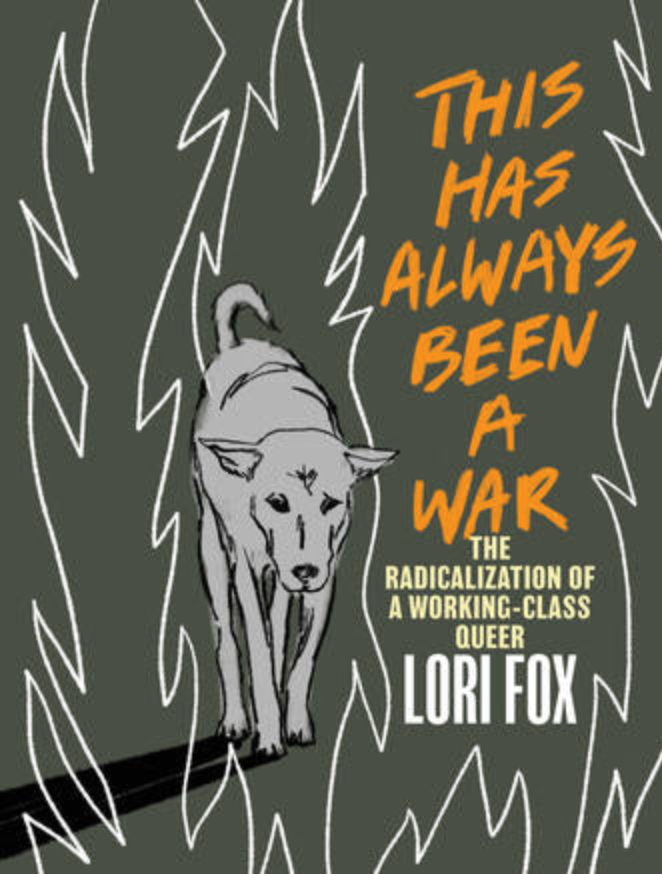 Review of This Has Always Been a War: The Radicalization of a Working Class Queer

This Has Always Been a War: The Radicalization of a Working Class Queer
By Lori Fox
Arsenal Pulp Press
320 pages, $20

In their debut essay collection, Lori Fox examines the intersections of queerness, class, poverty, gender, and mental heath. This Has Always Been a War is written in eleven essays and with each one Fox brings humour, urgency, and just the right amount of anger to conversations that demand attention. Through the collection, they take readers from their childhood growing up in Belleville, Ontario, to the bars of Ottawa and workers’ camps with mushroom and fruit pickers. Fox blends research spanning topics like rental costs, housing vacancies, and tipping, alongside scenes of their relationship with an abusive father who suffered from an undiagnosed mental illness.

The essays in This Has Always Been a War act like a matryoshka doll, and while they could be read separately, with each piece Fox makes a connection needed to understand the larger story being told, one of intersections. In the essay “After the Hungry Days,” Fox writes, “If, as the old adage says, ‘health is wealth,’ then in this country, health—a full mind-body picture of health, in which care for the mentally ill is treated with the same seriousness as care for the physically ill— is for the wealthy only.” Using their own experiences with mental illness and poverty, they effectively argue that mental health and poverty often do not exist separately but are tangled with each other.

The power of the essays come from the force and transparency of Fox’s voice. In “Call Me By Your Name”—about their abusive relationship with their ex, Lucky— they bring together themes from previous essays:

Poverty, that great crippler of all fortunes, and class were a big part of it; if I’d had money saved up, if I’d had a safety net, if I’d had a career that paid more, things might have gone differently. My queerness was another. If I’d had more experience with men, I might have understood the danger I was putting myself in (or I might not have), or I might have had a better relationship with my family and been able to ask them for help.

This Has Always Been a War uses the familiar—service work and family dysfunction—as entry points for reflections and explorations of the grey areas that exist as poverty, queerness, class, and gender intersect. Fox reminds readers that we can’t talk about change without seeing what exists where society and governments turn a blind eye.

Megan Cole is a tattooed food enthusiast with an obsessive reading habit. She still listens to “Jagged Little Pill” by Alanis Morrisette and she writes about Dawson’s Creek, the occult, food, gender, and first loves. Megan lives on the territory of the Tla’amin Nation in Powell River, B.C.

Tags: 45.3 | Audacity | Lori Fox | Megan Cole | This Has Always Been a War: The Radicalization of a Working Class Queer