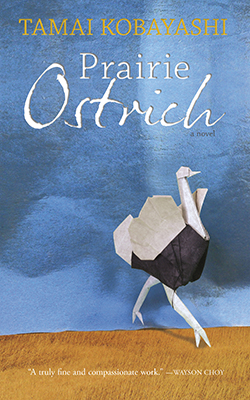 “The Japanese part has got to go,” Egg Murakami says to herself as she tries to brush off and survive another day of school bullying. It’s 1974 in a small prairie town, Buttercreek, Alberta, and the only Japanese-Canadian family—The Murakamis—are falling apart after the death of their only son. In the centre of it all is eight-year-old Egg, the youngest in the family, who is more sensitive than anyone around her is aware of. She lives on her family’s ostrich farm with her older sister and parents who are dealing with the grief of their son’s death with alcohol and detachment. Once the barn served as the family’s bread and butter, but has now become the father’s daily hideout and Egg’s after-school safe haven.

Between school bullying and the alienation from her family, Egg doesn’t feel like she’s enough for anyone: “Now they are all broken apart and Mama’s lost and drifting and all the king’s horses and all the king’s men will never be able to put them back together again.” In her search for the truth behind her brother’s unexpected death, she comes to realize that life doesn’t have as many answers as her books and homework. “She thinks, people die all the time. You make up a story to make sense of the world. But what if the world doesn’t make sense,” Kobayashi writes.  A lesson learnt much too early.

Stories told from the perspectives of a young protagonist often risk sounding pretentiously precocious or condescendingly naive. Tamai Kobayashi, however, has created an intricate and grounded portrait of adversity in adolescence. Egg is grappling with her first crush, torments from a school bully, and daily microagressions related to her ethnicity and gender, while still maintaining a spark of wide-eyed optimism. Struggling with these complexities, the author eloquently develops a convincing full-story navigating personal and external conflict. This becomes apparent when Egg’s struggles converge and even she has to question if all her challenges are a consequence of her family and skin colour, or of her brother’s unexpected death.

Kobayashi’s heartbreaking, yet resilient story of Egg reiterates how issues of ethnicity, gender, class, history, family, and growing up are never experienced independent of other struggles and identities. And if good stories are meant to remind readers that none of us are truly isolated or remarkable with our thoughts and shortcomings, Prairie Ostrich kindly reminds its readers of the heavy insecurity we all experience as we navigate the world, and even in the relationships that are most important and intuitive to us.