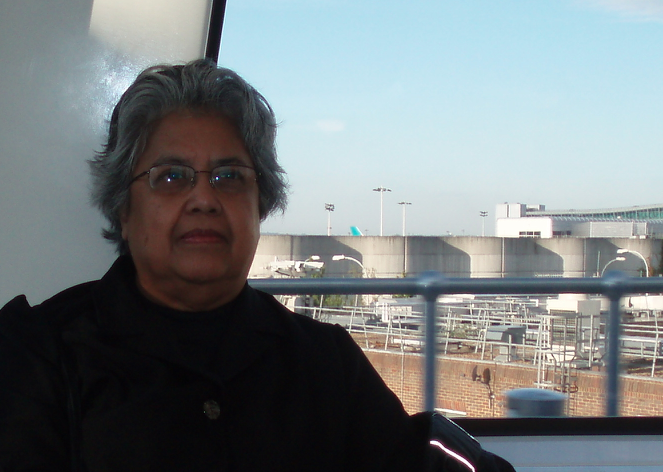 Lakshmi Gill, writer and one of the first women members of the League of Canadian Poets, on her writing practice and her poem “Mental Lucina” published in 38.4 Fieldwork.

Lakshmi Gill is a writer based in Delta, BC. Some of her works include Novena to St. Jude Thaddeus (Fiddlehead Press, 1979),The Third Infinitive (TSAR, 1993), Returning the Empties, New and Selected Poems: 1960s to 1990s (TSAR, 1998), and anthologies and literary magazines in Canada, USA, Ireland, Australia, India, Macau, Hongkong, and the Philippines. She and Dorothy Livesay were the first women members of the League of Canadian Poets in its inception in 1966.

In Room 38.4 Fieldwork, we were pleased to publish her poem “Mental Lucuna.” Collective member Taryn Hubbard had the chance to ask her a few things about her writing practice.

I noticed in your poetry that your family comes up a lot—your children, father, sister. What draws you to write about family?

I guess it’s because it’s closest to me, and important to me. The people I find most interesting are in my family. You know Stephen King, right?

He can write stuff better than horror, but publishers make him write horror because that’s what he’s best known for. Sometimes you want to get out of the genre. I felt that way in 1998. I stopped writing about immigrants, racism, refugees, and so on, and all the things I confronted when I first arrived, and I was sick and tired of it. But publishers, I thought, preferred that I write about these things.

Why do you think that was the case?

I don’t know why one is trapped into a genre, but I think it’s because it’s a business, particularly when you have a name, and I’m supposed to be angry about racism and so on. I am angry with it, but sometimes you get tired of it.

Sometimes you get tired, and you do want to be happy. You want to belong, and be a part of something joyful, particularly at my age you start thinking “what is it all for?” Sometimes you just want to write about your family.

Do you have a writing routine?

I used to be a night time writer, but when I had young children I would write, like Alice Munro, at the kitchen table. This is the problem with women who have young children. You have to fit it when you can. That’s the funny thing about Virginia Woolf. She had no children, she had money, and she had many rooms, really. So in reality, when you have children, a husband, and parents you are taking care of, you do what you can. I began writing on my bed because that was the place I could be for the few hours.

When I was a single mother in the late 1980s, during the time you had to send manuscripts in the mail with return post, not like today where it’s all online, it got expensive.

Why do you write?

Words hit me. I’m a symptomatic writer. Sometimes, a poem comes out full-blown and it just needs to be written down. Other times, it gestates in the mind then needs a lot of editing. All the things that other writers say on this subject are right—response to an issue, statement to be made, for example—.

There is this poet, Georg Trakl. He wrote about schweigen, the German word that means silence. In his poem “De Profundis” there is a particular line I like: “It is a hissing wind, that encircles empty houses.” What we hear is not the wind, but the empty houses. He committed suicide because he was seduced by his words. That’s the problem.

My silence is different from him. Because in my silence, if you are talking about “Mental Lacuna” those missing letters are hidden in a quiet way. They are not loud. My silence is not loud, not like Trakl. That is the difference between us, I guess.

How was your experience as an ESL teacher?

I wasn’t always an ESL teacher. I was in a bus when I first arrived in Vancouver because I didn’t have a car. Two young people came on the bus, they were white, and they told an old Chinese lady to move from her seat. The woman didn’t have the words to say anything to them, so she moved. There was this injustice. I thought, if I could teach this woman to say something to them, this wouldn’t have happened. I was teaching English literature at the time to all these white people. So I decided to switch to ESL and teach immigrants and refugees.