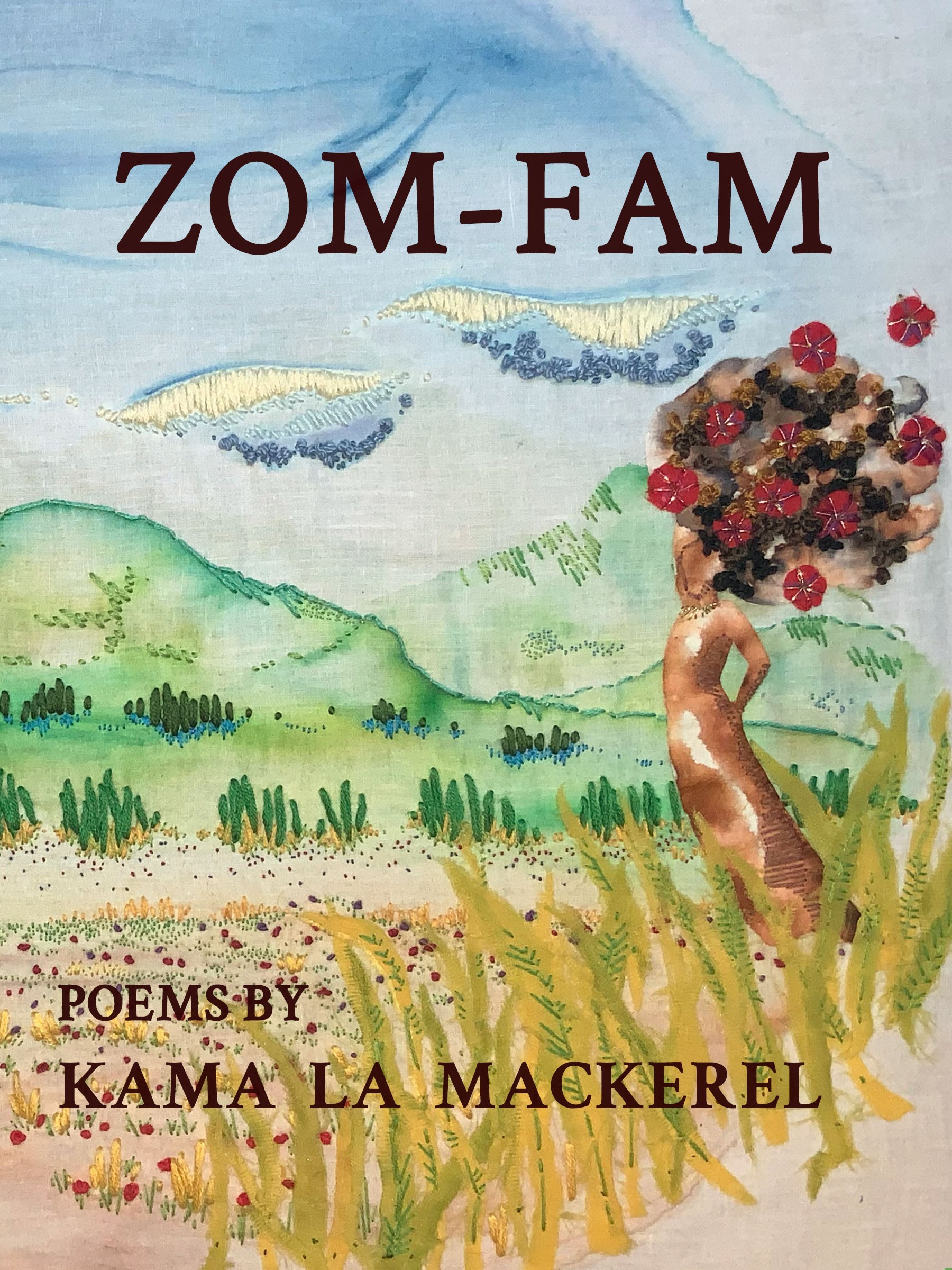 ZOM-FAM, Kama La Mackerel’s debut poetry collection, is uplifted by their years of intimate stage performance. They are an interdisciplinary artist that unquestionably knows how to summon their audience’s close and venerated attention. That stage magic, that invocation, echoes throughout these long-form poems, and offer highly-engaged and unique modes of storytelling. Even on the page, one can hear La Mackerel’s arresting anaphora, breathy rhythms and varied lyrical tempo. One can see their abundance sensory imagery and motifs of Mauritian place making and divine femme symbolism.

Poet and memoirist Amber Dawn (and former Roomie) and Kama La Mackerel have been long-distance corresponding for the past year. This feature interview with Kama La Mackerel is a culmination of their exchange.

AD: ZOM-FAM was written in tandem with your full length theatrical solo show of the same name. How does your processes of writing for page and stage influence one another?

KLM: Most of the material that comprises the eight lyric poems in ZOM-FAM were originally written as spoken word pieces. In 2016, I toured Europe with my first solo spoken word show, From Thick Skin to Femme Armour. Upon my return, I realized that although I had very much enjoyed this process, my body was craving movement (I had been a dancer throughout my 20s).

As a multidisciplinary artist working intertextually, I was extremely curious to know: how would my poetry move on a stage? How would I deliver my storytelling if I abandoned the mic-stand and gave my body permission to also speak through movement and ritual? What other textures could I bring to my voice and expression if I deepened the embodiment of my poetry?

That’s when I started developing ZOM-FAM as a show. Throughout this process, I did not think of ZOM-FAM as a piece that would also be published. I thought about it as a poetic score meant to be read out loud, with qualities proper to the spoken word.

Turning the manuscript into a poetry collection came later in the process. In doing so, I was interested in still being true to my voice as a performer. I wanted to create a text that would perform textually and intertextually. I thought of the page as a stage where the text could live and take on multiple meanings. So in this sense, the process of writing for the page was very much influenced by performance. I think of the body of the text on a page as being akin to that of the body of the performer on stage.

KLM: Poetry (and reading generally speaking) is a mostly private experience: you do it on your own, in your own time, at your own rhythm, engaging or not with the text as you want and you develop a private relationship with the work.

Performance and live reading, on the other hand, is collective. The experience is shared within a common space and a common timeframe. And as a writer/performer, you get an immediate response to the work. Live performance allowed me to try material on audiences and to learn from their feedback. For example, I don’t think I would have written long-form poems if it were not for live performance. Most of the contemporary poetry I read is short-form. It was receiving positive responses from audiences to my “weird” poetic-storytelling that gave me the confidence to pursue this form of writing.

Live performance also allowed me to better understand my own poetic rhythms and to trust in these as being my most truthful voice. They allowed me to develop a sensorial and aural relationship with writing, which greatly enhanced my work.

AD: You’ve written about Mauritius with tremendous care and keen specificity. Would you like to talk about your approach to evoking time and place in poetry?

KLM: I wrote about Mauritius from a very specific context, which is the context in which I grew up, through the lens of family history. I think there are many ways of being Mauritian and there are multiple ways of writing Mauritius. Mine is just one narrative of the island.

In writing the family history, I was definitely interested in exploring the relationship between the personal and the political. I wanted to write about the multiple ways in which the colonial regime slipped into the intimacies of the family home. Ultimately, my family and I experienced colonial violence as an experience and not as a historical, theoretical or intellectual concept.

I was also keenly aware that I was writing this book from the vantage point of being an immigrant in Canada, one who had gone to university and who was writing a book about Mauritius in English, in an imperial language! So I wanted to create a pastiche of image-making that was grounded in everydayness: with everyday objects and everyday rituals of the island. I wanted to bring the smaller details of the quotidian to life.

In doing so, the use of Kreol and other hybrid, Mauritian linguistic “quirks” became increasingly relevant. Within the language itself, and the ways in which language is deployed in ZOM-FAM, I wanted to honour the ancestral and colonial languages that were part of my upbringing, the mixture of Kreol, English, French, Bhohpuri, Tamil, Hindi etc. I think of those two lines, for example:

Within the span of two lines there are three languages being activated— exploring language in such a distinctive and hybrid way allowed me to create a poetic space that captures the cosmopolitanism of Mauritius as an island.

AD: Please speak to some of your beautifully distinct craft choices — the frequent use of anaphora, your image systems (of blood and ocean, in particular), and the considerable white space on the page.

KLM”: The island and the ocean were both very much at the centre of this work from the beginning: the is/land both as the motherland (for me) and the land of forced displacement and servitude (for my ancestors), and the ocean as a physical, metaphorical and spiritual figure that acts both a site loss and severance (for my ancestors) and a space for healing and ancestral reconnections (for me).

The use of anaphora, for example, or the placement of some of the text on the page, or the rhythm in certain passages are very much influenced by the literal sounds and movements of the ocean. The ocean has its own rhythms, it moves in tides, it goes and it comes back, just like our own human bodies are filled with water and have their own tides, waves and rhythms. At the crux of the composition of ZOM-FAM was very much the is/land-body-ocean relationship that I tried to translate through text.

AD: What did you cherish most about writing this book?

KLM: What I cherish the most is the journey itself, the long, drawn-out process of writing this book, which lasted a few years! On the one hand, there was the writing of the poetry itself, the perfecting of the craft as artistic expression. And on the hand, there was the ongoing search for my own poetic voice, the search for the stories that ring the most truthful to who I am, that resonate most honestly in my body.

So alongside the process of writing this book was my own human and spiritual process of growing into myself. This is an ongoing journey that is filled with dark roads and much grief, but it is also the journey that brought me closer to my life’s work, my life’s purpose, and the role that I take on as an artist, as a poet within the communities I belong to.

And it is this journey that I cherish the most. This is a book that I feel proud of, not because I think it is great or exceptional in any way. But when I read it, I ask myself: is this the book that I dreamt of? Absolutely! It is a book that I believe is truly me, in all my complexities, and this book honours my voice as an interdisciplinary artist, a femme, a human and spiritual being. And the (long and arduous) journey to get me here is what I cherish the most.

ZOM-FAM the performance will premiere at the Montréal, Arts Interculturels (MAI) Oct 6-10, 2020.

ZOM-FAM is available for pre-order through Metonymy Press and will launch on September 10, 2020.

Kama La Mackerel is a Montreal-based Mauritian-Canadian multi-disciplinary artist, educator, writer, community-arts facilitator and literary translator who works within and across performance, photography, installations, textiles, digital art and literature. Their work is grounded in the exploration of justice, love, healing, decoloniality, hybridity, cosmopolitanism and self- and collective-empowerment.

Amber Dawn is a writer and creative facilitator living on unceded Coast Salish Territories (Vancouver, Canada). She is the author of five books and the editor of three anthologies.