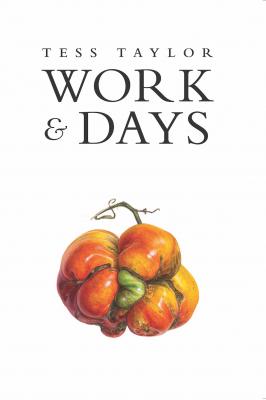 In Work & Days, Taylor casts the physical attributes of the ecological world in a deeply poetic light.

Tess Taylor’s Work & Days performs a moral, political, material, spiritual environmentalism. This calendric cycle of twenty-eight poems studies the relationships between the local and global, and organisms and their changing seasonal landscape. In Work & Days, Taylor casts the physical attributes of the ecological world in a deeply poetic light.

A poet, avid gardener and cook, Taylor was awarded the Amy Clampitt Fellowship, which secured her a rent-free cottage for a year in Western Massachusetts. Her plans to write in isolation and finish her first book of poetry shifted when she chose to intern on a farm instead. The daily tilling informed her writing and she began to compose poems to track the labour of small-scale agriculture.

The resultant collection emotionally bears the signs of this quotidian physical labour—its pacing articulates how time becomes qualitative when tended to ecologically rather than when we regard it as a finite resource under neoliberalism. In contrast, Work & Days keeps qualitative time: “Branches shuttle icy rosaries”, “They cut a furrow—a line between the winter and the spring”, “As we slice, the day hovers / Soon it will not”. Taylor measures out days and seasons with earthy, embodied images.

The turn to the pastoral in Work & Days isn’t a refuge or escape from modern anxieties. Taylor’s speaker is a citizen and organism, caught in political and environmental webs. Her poems contain the awareness that “we are not self but species.” The poem “Apocalypto for a Small Planet” opens with “& the radio reports how in 2050 / farming Massachusetts will be like farming Georgia— / all’s flux, no one can say what will grow in Georgia.” While the poem grapples with cynicism and helplessness in the face of global warming—the speaker’s friend “says my hunger / to be near zucchinis // will not save the planet from real hunger”—Taylor’s deft lyric holds all the tensions of living under the threat of ecological disaster and degradation. The poem endures to beautifully suggest “these cucumbers are more art than science” and, despite all uncertainty, the speaker returns to the small but mighty task at hand: “here I work a plot that also grounds—”

Taylor knows the poetic pathways of Hesiod and Virgil that lead to farming the land and she brings her own wry yet sincere modern sensibility to the genre of the pastoral. The speaker contemplates her exigency and place in relation to her proximate ecosystem and larger global systems. In “Elsewhere Food,” she observes concerns both immediate—“Failures gnaw the crop”—and faraway— “Elsewhere famine, elsewhere flood. / Rainforest clear-cut for pasture.” Taylor’s strength is that she brings both the local and global perspectives into view. Deceptively quiet and simple, Taylor’s poetic vision grasps both granular textures of the seeds she plants in the earth and the looming, pressing concerns blooming on the global scale.

Adèle Barclay’s poems and criticism have appeared in The Fiddlehead, The Puritan, PRISM international, The Literary Review of Canada, and elsewhere. Her debut poetry collection is If I Were in a Cage I’d Reach Out for You (Nightwood, 2016). She is the 2017 Critic-in-Residence for CWILA. She lives in Vancouver.