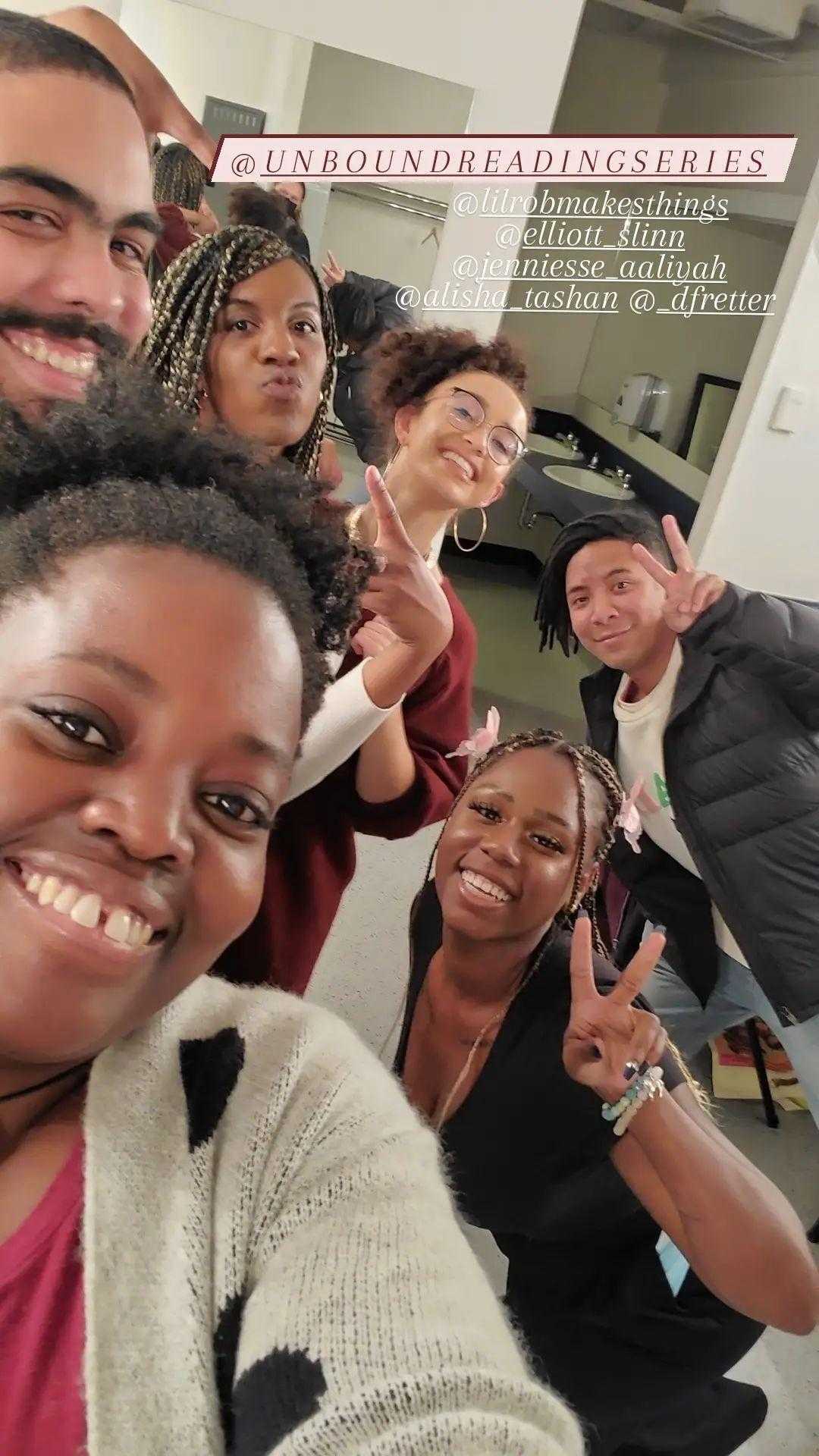 ROOM: Welcome Hope! Thank you for taking the time to chat with us today. I’m really excited to learn a bit more about the Unbound Reading Series and of course, the minds behind it. Can you introduce yourself, and share a bit about how you’re coming into this chat today?

Hope Lauterbach: Definitely, thanks. My name is Hope Lauterbach (she/they) and I’m a Zambian Canadian writer, poet, and creative community organizer. I’m the creator of Unbound, which was started in 2020.

I’m coming into the chat today with a lot of energy just because I’m working from home and trying to squeeze a lot into the day. But, it’s a lot of positive things. So, I’m really excited to talk about Unbound, and for people to get to hear the lineup and be a part of this event that we’ve been putting so much love and energy into.

ROOM: For those who aren’t familiar, could you tell us a bit about Unbound? How did this project start and what are you currently working on?

HL: I first got the idea in early 2020, before the pandemic started spreading in Vancouver. And, you know, I’ve always had this vision of having a reading series that featured Black writers. From my short experience in the Can Lit world, I noticed that at a lot of panels and events, they had at most, one Black writer on the panel. And the trends and the stories that were being highlighted were usually, you know, stories about trauma. And very often, stories set in or surrounding slavery. And it’s like, wow, this is really interesting that this is what’s being highlighted out of the hundreds and thousands of Black writers out there. And so, it encourages the narrative that that’s the only story that will be successful, and that people want to read.

I thought, what would it be like, if we had a lineup of all Black writers writing in different genres. Like, what a beautiful thing that could be. So, I had this idea early in 2020. But, you know, the pandemic happened. The uprising happened with the murder of George Floyd. So, I had a lot of time to reflect. A lot of people in our community were reflecting on their Blackness. And also, a conversation I was having with other Black writers was, “how can we contribute in the ways that we can?” Because, not everyone is comfortable being on the front lines, but I still believe that you can contribute in a way that is meaningful and impactful. We don’t all have to do the same thing. We all have different skills. So I was like, what can I do?

In August 2020, I went to this beautiful Black wellness retreat created by Kendra Coupland, called the Dark Before the Dawn retreat. It was the first time I’d been in Vancouver with just Black people, and we were on this beautiful farm in nature. We had four days of healing and we were able to reflect on what it meant to be Black in Vancouver amongst other folks who were also questioning that. From that retreat, I was able to see, like, oh yea, this is what I want to do. I really felt strongly the need to cultivate a Black literary space.

In October 2020, Unbound was a simple live stream show because it was still heavy COVID times, but we had all the readers there live, vibing off of each other, hyping each other up when we’d go to stand in front of the camera. It was such a beautiful event, and it felt really good.

Back then, it was just about creating this community-supported event with friends chiming in and helping out. I wanted it to be about celebrating the different voices there are. We had some people reading poetry, and spoken word. Last year, I read some prose. And this year, we’re gonna have some more prose and poetry, and just celebrate, and share stories of strength, love and imagination, too.

We also started a virtual monthly writing group this year, and that’s been a really cool space to get to know writers one-on-one. We come into the space and do some silent writing, then we have a chance to talk about what we’re working on in our projects. I like the Zoom option because more people can access it. Streaming events is really important.

ROOM: What does the word “Unbound” mean to you?

ROOM: Can you tell us a bit more about the team that makes Unbound Happen?

HL: I met Lili Robinson at the Dark Before the Dawn Retreat. They helped out last year with a lot of the organization, because we had our first in-person event with an audience. Lili has been part of the team for the past two years, as well as Alisha Tashan Davidson this year. I cannot speak enough about them. I met Alisha through Lili, which is another thing I love, just meeting people through people. That’s how we build community.

Alisha is a poet who was at the SFU Writer’s Studio around the same time I was, and so we connected on that. Having their support and also, having their vision being a part of the project, really, really helped it grow. I never wanted this to just be like, my thing. I’m not doing this for me. Unbound is about any Black writer out there who wants community and, you know, wants to be seen as more than just a Black writer. Like, what does that even mean? We’re so far beyond that as a spectrum.

One thing that’s important to me about this event is inviting people back to read. This year on the lineup, we have two folks who have previously been featured readers, Junie Désil was part of our first event, and D Fretter was a reader at our second event. I like to invite people back so they get a chance to meet people who are new to the series or new to the community and then just keep that cycle going. As Unbound grows, there’ll be more opportunities for that.

ROOM: Who and what has inspired this work?

HL: Kendra Coupland and Chelene Knight. The work that Kendra does as far as creating a space for Black folks to heal and feel seen, and Chelene’s work in the literary space of uplifting voices and promoting intentional and thoughtful writing practices, has really changed the way that I think about how I contribute.

There’s also an interview that really inspired me. It’s done by Wayde Compton, back in 2005, and it talks about Black writers in Canada. He says, “I believe that black utterance begets black utterance and, conversely, that black silence begets black silence.” It exemplifies to me that the work is a constant thing in progress, and I think it’s really important to go back to the people who have been doing it for years and get their guidance. We don’t always have to be starting something fresh and new. We can start our own projects, but it’s also good to get support led by the folks who were doing it before us, then we can build upon each other’s success.

HL: I would say, don’t underestimate asking for help. Asking for help is so important. I was so burnt out after last year’s event. So, this year, I’m pacing myself. I’m asking for help. I am admitting that, well, I’m tired. I’m saying when I need space or time.

And honestly, don’t be afraid to do it, even if you’re afraid. Audre Lorde said, “When I dare to be powerful, to use my strength in the service of my vision, then it becomes less and less important, whether I’m afraid.” That’s a quote I hold close. I think, as long as your intentions are true, and if it’s bigger than you, I find that it’s more meaningful, and has more likelihood of success. If you work as a community, you’re pulling other people in as resources. It’s not an ego-based project.

ROOM: In a future of unbounded imaginings, what do you see for Unbound and the writers in your communities?

HL: We have a lot of dreams. I have a 10-year plan, but I won’t go into that. But you know, I just want to keep adding stuff every year. This year we brought on the monthly writing group. We’re also going to be offering a writing workshop in November, to be announced.

I believe in a gradual, organic growth. Because obviously, we want to do all the things but it’s like, what are we capable of doing right now? What’s feasible right now in a way that won’t burn us out? But also, as we’re still growing and learning about what the community needs, I think it’s good to just take things slow, because I have a vision of how I want Unbound to be, but is that vision actually what people need?

ROOM: What are you looking most forward to for the Unbound reading event coming up?

HL: I’m looking forward to the community discussion with all the writers and our host Fanny Kearse. All the folks who are on that panel have something great to say and I can’t wait to hear them talk together and share laughs. And I can’t wait for the audience to get to experience that too, because that’s just the beauty of Unbound.

Black Writers in Search of Place by Wayde Compton

The Dark Before the Dawn Retreat

Hope Lauterbach (she/they) is a Zambian Canadian writer, poet and organizer. They are a graduate of The Writer’s Studio at Simon Fraser University and creator of Unbound, a reading series and collective that celebrates Black creative voices. Hope’s work explores themes of identity and home, picking apart the inner and outer spaces we inhabit. They currently reside in that place between sleep and awake. You can find them at https://hopeadrift.ca

Lexi Mellish Mingo (she/they) is a multi-disciplinary artist living and creating on the unceded and unsurrendered territories of the Tsleil-Waututh, Squamish, and Musqueam Nations. Descending from both Afro-Guyanese, English and Scottish ancestry, her work is inspired by the complexity of diasporic experiences, and the process of place making, through community collaboration and dialogue.