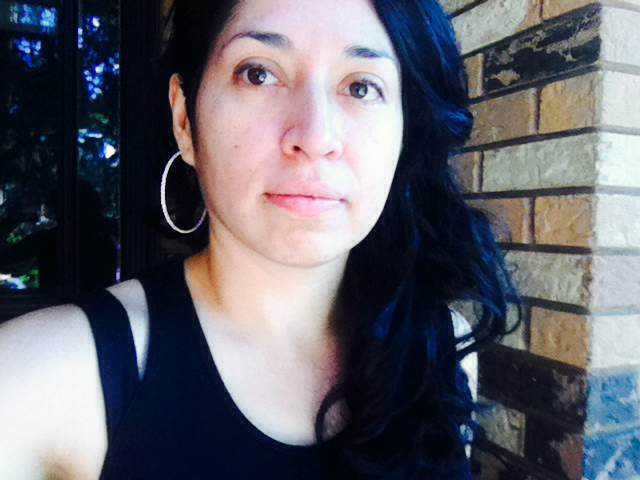 Mom says she doesn’t know how to twist her tongue in half.

Mom says she doesn’t know how to twist her tongue in half.

“It’s genetic,” you say as you fold your tongue and stick it out so she can see it.

You are sitting at the kitchen table in Brampton. The light from the window is in Mom’s eyes and every time she tries to fold her tongue, it falls flat like a tortilla.

At some point, Mom gives up. Her tongue gets tired.

Mom says she always wanted one of her kids to partner with someone that spoke Spanish.

“You don’t know how hard it is,” she told you one summer as you sat on the beige lawn chairs. “It’s strange for me to live here,” she says, in Spanish. “In this place where people will always ask me to repeat myself and where it will always feel like I’m stumbling with language.”

You ask her if she ever thought of going back.

“Nooooooo!” She presses her lips together and shakes her head from side to side.

You think about Mom’s best friend Maria, who bought a condo with her husband last year and moved back to El Salvador, and all the other Salvadorians who packed up their places in Washington, Montreal, and Hamilton to move back to a place where they are not Salvadorians or Latinos or immigrants, where they can speak freely without translating and where they have no accents.

To learn a new language, you have to be willing to fail.

You have to move the tongue into unfamiliar shapes and places. There are risks in these movements: eyebrows might furrow. Faces might turn away. The payoff is always in the possibility of reaching between languages and understanding each other. It doesn’t always work, and some places and spaces and faces are harder than others.

You remember kids laughing at you in grade three or four because you couldn’t pronounce the th sound in “three.” You didn’t know that you had to place your tongue between your teeth to make that sound, so when you tried to say “three”, it sounded like “tri.”

You learn the feeling of rejection.

You remember the first word you ever heard in English. Your family had just arrived in Toronto. You were staying in a hotel downtown.

You were standing by the bed when you noticed the cleaning lady speaking to you. All you heard was gibberish. You were six. Your mother stood by the washroom, close enough so you could, if needed, run over and grab her hand. The lady had light brown hair and a wide smile.

Mom told you the lady was saying, “Hola.”

You didn’t know why, but the lady and her sounds frightened you. You stood in silence until the lady left the room.

And yes, a lot of the words were mispronounced and sometimes unintelligible but you were all picking up the language and it was fast and Mom was working long days at a factory making antennas and she was tired.

And while all of you were busy learning a new language, she was being left behind.

Mom says she never feels confident in English, even after thirty years. Yet, you’ve seen her fearlessly approach strangers. Mom walks through the streets of Brampton and talks to the grocery clerks, to young people waiting at bus stops, to the secretary at your niece’s school, and to anyone who will talk back. She’ll ask strangers about their partners, their children, their work life, their dreams. Through these conversations, she learns intimate details about the people in your neighbourhood.

At first, you don’t have an interest in speaking with strangers. You think people that approach strangers are either lonely or needy. Your boundaries sometimes shoot up when strangers approach you. This all changes after you spend a summer in El Salvador.

In El Salvador, people behave like Mom. Strangers approach you like you are a lost relative and they ask you about your life and your family and openly tell you stories about their lives and loved ones. You find this closeness both uncomfortable and comforting. It is as if they are erasing all your boundaries, but when you speak in Spanish, they ask you where you are from. You feel like your tongue betrays you. You have spent too much time away from this place and this language so you try to keep quiet, so no one thinks of you as an outsider.

You know there is an older tongue that runs like a current through your Spanish. It reminds you that not all was as peaceful as you imagined. In your twenties, you learn about the 1932 massacre in El Salvador, about the killing of thousands of Indigenous people.

You wonder about your grandmother, who was eight years old when the massacre occurred. You learn that in El Salvador, people stopped identifying as Indigenous after the massacre and that many mothers and fathers stopped speaking Nahuatl to their children. To survive, tongues were forced to make different sounds.

This awareness makes you feel distant from Spanish. You now know you arrived at your mother tongue by route of colonial violence. You now know there was an older tongue, uprooted and silenced.

As a child, you watched Mom try to communicate in English. You watched as people dismissed her. Mom would turn child-like, sometimes growing red with shame. At times it felt intentional, like they didn’t want to take the time to hear her, like she was a burden, like she was making their lives more difficult just by trying to speak. It felt strange to watch Mom be so inadequate, to not have the ability to communicate like other moms.

As a teenager, you sometimes got embarrassed, took a few steps away from her while she spoke. Sometimes you stared at the floor and waited for it to be over. Sometimes she got upset and yelled. No one ever kicked her out of the bank or grocery store, thank goodness. You don’t know on which side you would’ve stuck yourself.

Over the years, you notice how Mom shifts from all these dismissals. She sometimes doubts herself, pauses when she should step in, waits for you to help her when she could help herself.

Now you are not patient with dismissals. Sometimes your anger, explodes and you have no control.

“She’s trying to tell you that she needs to cash this cheque and deposit this one.”

You speak to them like they are idiots. They are hurting your mother.

In your thirties, you realize you also feel out of place with English–except for you, there is no home in Spanish to fall back on.

You remember that in grade four, you recorded your voice to hear the Spanish accent and there it was, thick as the tongue that made it. You quickly erased the recording because you hated the sound.

But you do, and English feels like an object you are borrowing and at any moment, they can ask for it back and tell you to “Go back where you came from.”

In Nicaragua, you ask someone to pass you a guacal and they stare at you blankly. You ask again and point to the container on the sink and they ask you what language you are speaking. You say “Spanish” because you do not know that the word guacal is Nahuatl. Later, you will discover that you have Nahuatl words embedded in your Spanish–words like chocolatl, coyote, tomate, aguacate, and so you feel like someone has hidden something precious in your tongue.

When you say these words out loud to yourself, it feels like you belong somewhere.

Leonarda Carranza is a Salvadorian-born writer and poet. In her work, she explores issues of belonging and loss, and the affective qualities of oppression. She is a member of the Pages on Fire Collective, with whom she facilitates creative writing workshops and organizes public events and readings. In her spare time she loves jumping on her trampoline.