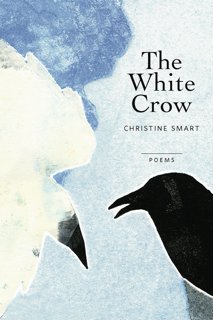 I want to write an intimate
close to the heart of the universe
poem, one that
embraces the simplicity
of a flower and the immensity
of the sea.
–Christine Smart, “The Sounds of the World”

This book about life, death, and grieving, infused with extraordinary observational power, is for sinking one’s teeth into, with plenty to digest in all three sections: Here, There, and Here & Now. In “Messenger” the white crow is “Mute as a clean page / snowy white and cawing.” So many poems are breathtaking, each stanza a gasp. A doe “leads her fawn to taste chocolate lilies,” in “Rooms Outside the House.”

Poems about construction are reminiscent of Kate Braid’s work, not just for subject matter but also for their peaceful, thrumming cadence. Many poems are mosaics of stanzas that could stand alone, moving and gorgeous with or without the rest. There is an obvious haiku feeling to simple, eloquent statements of nature, “A white peony / beside the steaming teapot.” The presence of the poet is never intrusive, but humble and observant, with a deep careful noticing that is quiet even when speaking of sounds.

Christine Smart may have developed her skills of observation while growing up on a farm, the youngest of eight children. No doubt her career as a nurse has helped hone those skills, as has her time at the University of Victoria, where she received a BFA in Writing, in 1997.

Loss and remembering are given the time and tender attention they deserve; there is beauty and hope in desolation. The author’s deceased parents are simultaneously mourned and brought back to life through detailed attention to their characters; we feel as though we know them. Only the phrase “A witty man” tells rather than shows. “My father never touched me or held me / on his lap” says so much more and is an impactful opening to the poem “Nothing Personal.” There is an almost absurd contrast between her mother’s death and the rampant life of a blooming garden. In a longer piece, “Stand Up,” about Smart’s sister, the first in the family with “an Honours degree / weighty as a wool-lined quilt”—aptly put, as their mother was always busy with needles and making—the reader, by its end, is cheering, fist in air:

She stood up for aboriginals, for women’s
rights, for daycare and children, she stood up
for the homeless, for missing women,
and after ten long years, in the late ’sixties
when my mother tried to talk her out of it,
when divorce was a bad word,
she stood up
against her husband
and left.

Poetry’s power lies in showing us how to look for the commonly unnoticed,and experience how the freshly observed profoundly enriches. Christine Smart, in this, her fourth book, powerfully, “plays the harmonica to rustle rain.”