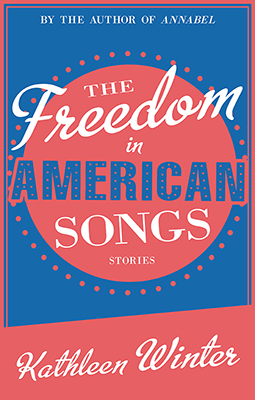 The Freedom in American Songs

Once in a while, a writer comes along who speaks to your heart, gut, and funny bone all at the same time. Kathleen Winter is one of those writers.

Her story “Knives,” from her engaging short story collection The Freedom in American Songs, starts breezily—a boy with circus skills regularly strides by his birth father’s house on stilts in full view of the man’s wife, who doesn’t know about the boy’s existence. But the tone shifts at the climax in a gut-wrenching scene involving the husband, wife, secret son, and onlookers. Here, Winter spools out an extended metaphor that captures the moment the wife’s worldview shifts. The narrator says, “I glimpsed furniture and other large pieces of equipment being shifted within the darkness of her watchful eyes—stagehands clad all in black moved silently in that darkness rearranging her set.”

Winter has a comic’s timing and a dramatist’s flinty eye. Her narratives often unfold like a runaway train, honing in on the frailties of her characters and drawing them out in an off-kilter but deeply humane fashion. She puts characters together and allows their personalities to subtly or spectacularly clash, creating reverberations beyond individual lives. Her characters often have not life-affirming revelations, but misperceptions which inadvertently create a bubble of short-lived happiness until the character is disabused of this illusion. She’s a master of the ironic register.

She’s also adept at hijacking our expectations for the story’s trajectory. In “Handsome Devil” the story points in a certain direction (an encounter with a good-looking man), but then—because of the main character’s devil-may-care attitude at being stood up—veers off on a different tack. A divorced guy “with a rum gut,” who carves duck decoys and packs a mean picnic basket, turns up at her door and an unlikely, ultimately doomed bond develops out of what is essentially a pity party. Many of her characters are seeking a connection with others. Sometimes the connections yield results, but most often, a poor choice leaves the character feeling she doesn’t belong, and the story ends with a “negative” epiphany.

A subtle thread runs through this collection: a ‘woman of a certain age’ not entirely in command of herself, susceptible to poor judgment or inadequate resolve ends up in unexpected situations. Miraculously, the narrative steers clear of bathos and tragedy, blazing a trail in that deeply satisfying place in between. A fabulously entertaining and absorbing read.