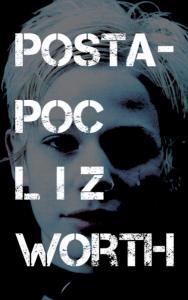 This novel is dedicated to nightmares, and rightly so. The story of Ang, who survives a suicide pact only to find herself at the end of the world, is as dark and lucid as the strangest terrors that befall us behind closed eyelids.

Set in Worth’s hometown of Toronto, the thesis of PostApoc—much like its characters— bursts forth with violent self-awareness, and is best characterized by one of Ang’s internal monologues: “If you fail to die when you’re supposed to, does it destroy the order of the earth?” Replete with guilt following her failure to end her own life, Ang convinces herself that her own choices may have brought upon “The End of Days.”

With the keen eyes and eclectic lexicon of a poet, as demonstrated in her 2011 collection Amphetamine Heart (Guernica Editions), Worth tells her story through Ang, in fragments rife with anxiety and dread: “If I’d died that day would we still have the rhythm of the seasons? [ … ] We lost the colour green and forgot that branches used to be something more than spiderlong fingers that snap in frail air.” Using drugs made from the ashes of the dead to create the illusion of life in a near-death state is the irony of Ang’s existence; in many ways, this is a novel about barely surviving.

Much like Worth’s other works, particularly Treat Me Like Dirt: An Oral History of Punk in Toronto and Beyond (Bongo Beat Books, 2009), the fulcrum here is punk music. The characters covet the ethos of a group of bands that form a musical underground plagued with nihilism, following a jagged, sonorous path into the very depths of darkness. And it is at the end of the world that music becomes both a means to an end, and to survival.

While not entirely new territory for this darling of the macabre, Worth’s novel is a study in discomfort—the reader is held captive by the same undercurrent of disorientation and fear as the characters. And it achieves this through an unfaltering dedication to atmosphere: the setting serves as protagonist, forcing us into the decay, degradation, and detritus of a world left behind. The things Ang and her friends do to survive become a larger philosophical question for all of us: How far would we be willing to go—and would we bother?