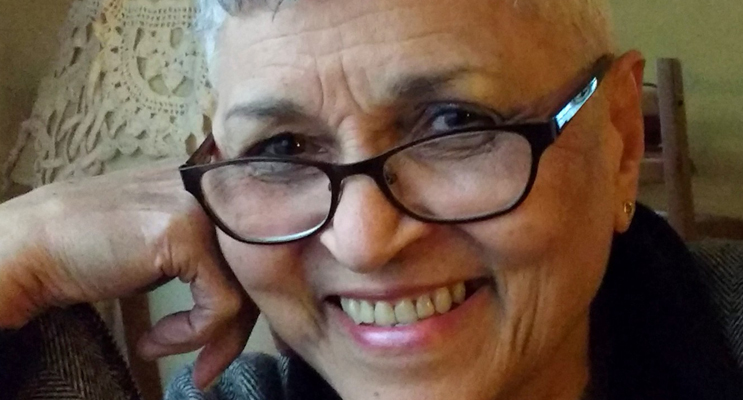 Pamela Mordecai is the author of over thirty books of fiction, poetry, non-fiction, and writing for children. In what follows, Mordecai discusses her writing practice, the role religion plays in her writing, her choice to write in Jamaican Creole, and what she will be looking for as the judge for Room’s 2019 Poetry Contest, which is open until August, 2019.

Pamela Mordecai is the author of over thirty books of fiction, poetry, non-fiction, and writing for children. Her recent titles include the poetry collections Subversive Sonnets (Mawenzi House/TSAR Press, 2012) and de book of Mary: a performance poem (Mawenzi House, 2015), and her debut novel Red Jacket (Dundurn Press, 2015), which was shortlisted for the 2015 Rogers Writers’ Trust Fiction Prize. Her writing has appeared in journals across Canada and abroad and has been widely anthologized. Her poetry has been shortlisted for the Canada Writes CBC Poetry Prize and the Bridport Prize (U.K.). One of her books, a verse play titled de Man: a performance poem (Sister Vision Press, 1995), has been performed across Canada and the Caribbean. Born and raised in Jamaica, Mordecai currently lives in Kitchener, Ontario.

In what follows, Mordecai discusses her writing practice, the role religion plays in her writing, her choice to write in Jamaican Creole, and what she will be looking for as the judge for Room’s 2019 Poetry Contest, which is open until August, 2019.

ROOM: Your work often centres around characters and stories from the Christian tradition. For example, one of your most recent books, de book of Mary (Mawenzi House, 2015), is an epic in verse based on the story of Mary, Joseph, and Jesus as related in the New Testament. The book also draws on extra-Biblical Christian teachings (as in its reference to Anne, mother of the Virgin Mary). What role does religion play in your writing? What models (literary or other) do you look to when writing on religious themes?

PM: Religion has turned into such an ugly word. So many irreligious things have been done in its name! I believe in Jesus. I like him. He was a rebel, bent on upsetting the status quo. He is my kind of guy and so I am interested in his story. His mother is pretty cool too. She was an adventurous fourteen-year-old with a lot of spunk. The situation of this mother and son, colonized as they were at the time by the downpressive Romans, is not unlike my own. I grew up in an island colonized by the British, also downpressors. The language situations are also similar: in Jesus’s time, important folks spoke one way, and poor-folks spoke another. In Jesus’s case, Latin and Hebrew were the prestige languages and Aramaic and Koine Greek the dialects; in my case, English was the “standard” language and Jamaican Creole or patwa the dialect.

Muslims revere Jesus and his mother and theirs is a very different religious tradition. So I may come to the Jesus story by a religious route, but Jesus and his teachings are interesting to me for a much broader set of what might usually be construed as religious reasons.

As for models, I am using Jamaican Creole, a deprecated code, to tell sacred stories. Nobody had done so as extensively as I did when Sister Vision Press published my first “religious” performance poem, de Man, the story of Jesus’s crucifixion in 1995. (The gospels in Jamaican Creole, called Di Jamiekan Nyuu Testiment, appeared in 2012.) I like to think that I am breaking new ground.

PM: In the beginning, poetry was performance. It never really stopped being so. I come from an oral culture with a literature that starts as orature; its written-down tradition happens late. For me, words are and have always been signifying sounds. I took part in a lot of theatre and recitation of poetry when I was growing up, wallowing in Shakespeare, Chaucer, and the Romantics. In my lived experience, there is little difference between the genres, and in my work, performance is everything. My husband has often said, on reading one of my short stories, “You should be writing plays!”

ROOM: Your book Subversive Sonnets: Poems (Mawenzi House/TSAR Press, 2012) is a collection of lyric narrative poems composed in fourteen-line stanzas. Why did you turn to the form of the sonnet for this collection? What was it like to write an entire collection of poetry with a specific form in mind?

PM: Well, subversive odes or subversive ballads doesn’t sound quite as well as subversive sonnets! Seriously, though, the subject matter in many of these poems is pretty harrowing. The traditional form was a kind of counterpoint, a way of holding down the horrors. It was also a companion that I could hang on to as I wrote. As for writing an entire collection in sonnets, there was a tradition, folks who had done that before: Spenser, Dante, Shakespeare, Claude McKay, Elizabeth Barrett-Browning, Derek Walcott, Marilyn Nelson—why not me?

ROOM: Much of your work is written in Jamaican Creole. What motivates your decision to write in Creole? How has this decision influenced other aspects of your writing?

PM: Bible translators have a wonderful term. They speak of a community’s “heart language.” Creole is my heart language. Though both English and Jamaican Creole are my first languages, Creole gives me poems and stories in a way that English does not. Writing in Creole is also a political decision, a way to affirm and celebrate perhaps the first thing that the enslaved peoples of Africa made when they were stolen from their homes and forcibly transported to an alien, brutal, cruel island world where every effort was made to dehumanise them and strip away their languages and cultures. Jamaican patwa elaborated quickly, making its way from pidgin to creole in a couple generations, some linguists say. It was a proclamation from hordes of chattel that they would survive.

ROOM: In addition to being a poet, fiction writer, and playwright, you’re also a children’s author. In fact, your first book, Storypoems: A First Collection (1987), is a book of poetry for children. Do you find that there are any particular challenges when writing for a younger audience?

PM: I have the mental age of a four-year-old. It helps when writing for younger audiences. Children have lively imaginations, an ebullient sense of humour, a taste for language, a love of rhyme and rhythm, music and wordplay. They are also more honest than adults. They are a not undemanding audience, but if you respect them and avoid the foolish mistake of condescending to them, they are most rewarding to write for. It is a great privilege.

ROOM: What role does music play in your poetry?

PM: My poetry could not exist without it.

ROOM: What advice do you have for aspiring authors?

PM: Writing can entrap me anywhere, but if I am purposefully at work on a project, it’s usually the desktop in my office at home, or my laptop on any flat surface on the road.

ROOM: You’re the judge of Room’s poetry contest this year. In your opinion, what makes a winning poem? What will you be looking for when reading entries?

ROOM: What’s next for you?

PM: My current project is de book of Joseph: a performance poem—at least, that’s the one first in line. Behind it come a short story collection, “Goat Mouth” and a novel, “The Tear Well.” I suspect a book of randomly written poems may also have collected itself. I shall have to see. In October, I have been invited to a Festival of Poetry in Serbia. I hope to attend with my friend and fellow poet, Stephanie McKenzie. I am very excited by that prospect.