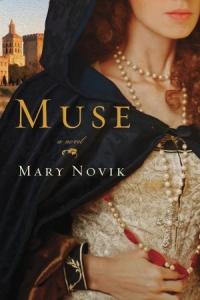 Vancouver-based writer Mary Novik’s first novel, Conceit, was longlisted for the Scotiabank Giller Prize in 2007 and won the Ethel Wilson Fiction Prize in 2008. Muse is Novik’s second novel, and is set deep in history, both in time and detail. Novik weaves the story of fictitious protagonist, Solange, a spunky redheaded seer, into events of fourteenth-century Avignon including the historic personalities of the time: the poet Petrarch, his brother Gherardo, and Pope Clement VI.

From the beginning I was hooked: “I first hear my mother’s heartbeat from inside her dark surrounding womb.” This powerful image was followed by one of Solange’s defining visions. She could recall what we can’t, or shouldn’t; the depths of the past, the images of one’s future. “His face was as clear to me as the blood vessels inside her womb, his skin foxed with a tracery of veins I looked straight into his eyes and they were as hard and blue as lapis lazuli” (page 3). With this rich opening page there was no going back.

Born above a tavern to a prostitute, Solange is the narrator of her own tale, a dark story, but not without hope. When things seem impossibly bad for a young Solange, she simply starts over. We follow her through her attempts to find a niche for herself in the scriptorium at the abbey where she is raised, to the streets and then to the court of Avignon. As a child, Solage never takes her situation for granted when things are going in her favour, nor allows a bad situation to linger. Ultimately, as she matures, she learns to depend on herself and her array of skills, whether that be as scribe, lover, or prophetess. She thinks on her feet like an actor might, and shifts into the role necessary to see her through every situation. Though talented, Solange is not without flaws (as she has a frustrating weakness for the affection of fame-driven poet, Petrarch). It is in her imperfection that we find her real and likable.

Taking in the visuals while reading this story is akin to walking through a gallery of Renaissance paintings at a brisk pace; I find the description rich, and yet not bogged down with too many details, a difficult task when setting a story into an unfamiliar scene. A particularly gorgeous line is when Solange considers the text in the scriptorium where she is training to become a scribe, and widow Madame de Fores tells Solange to see how “‘Each word is like a ripe fruit eager to be bitten into.’ She showed me how to take the words and roll them in my mouth” (page 22). In that moment I am there with the young scribe, enjoying the awe of her newly found passion for language and the printed page.

Muse takes us through the inner workings of a fourteenth century abbey, to back alleys and brothels, and to the papal apartments in Avignon. Novik keeps the plot of her richly detailed novel moving. Yet, when it lingers, it is for deliberation and focus; for this it works. Muse is a story whose plot pulled at me while the language whispered to slow, so as to not miss a thing.