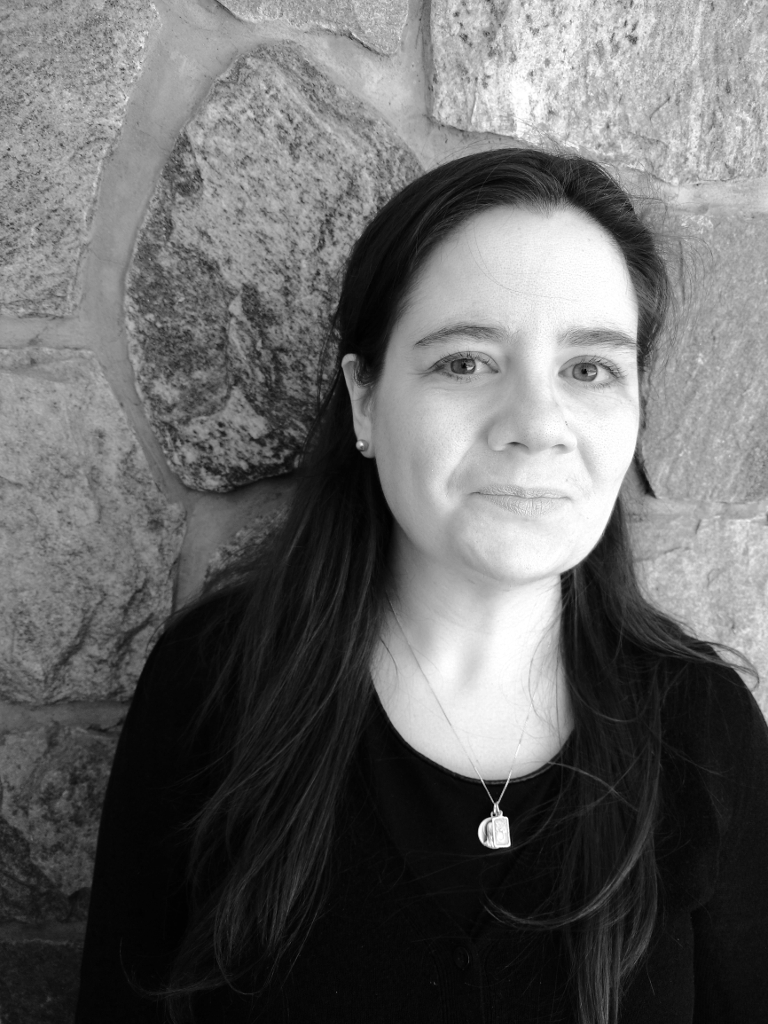 The tongue is lost—now blood pools
in her mouth. Her maid stops the wound
with a tampon, split down the middle
like some carpenter’s unlucky thumb.

The tongue is lost—now blood pools
in her mouth. Her maid stops the wound
with a tampon, split down the middle
like some carpenter’s unlucky thumb.
Splinter-mouthed, the girl wears the grief
that is her mother’s heritage. She
takes the thread—she knows
what she hunts—she tricks and
strains, counterfeiting time
into a skein of slapdash resistance:
one purple gallinule against a pale sky.
She did not think she would know
this death in life. In darkness, she dreams
of rebirth, her father’s country—
the sandy shores against versions
of white and blue. She crosses her hands
and waits.
Procne

Feeling is not an option:
her rage is mythical, biblical,
canonical, in shades of roses but not
pretty, she stands in a parking lot
under the ductile moon—
the arid sky, her arid heart—
drinking Red Bull and vodka,
unflinching at the flames they cast
about her throat, her chest, lungs
ready for anything, even this.
She casts her gaze about, squeezes
the woven missive in her hand. When
she takes the crowbar to the window
of a stranger’s sleeping car,
all she can see is her husband’s skull,
its shape like a bird’s perfect egg. His name
is still on the display screen of the cellphone
she left on their nightstand, its existence
confirmed in flashing light. She brushes
two frayed wires together,
makes fire, then drives.

She is complicit
but only to the night, to her sister,
who holds her as she shivers,
a field rabbit quaking before a pack
of cats, their talons, their glare
sharpening. At first her eyes are heavy
before his wife: she could have worn
something different or refused
the wine he offered. For a moment,
she wishes she could go away
like wind, disappear quick and
violent. She wraps her arms
around her sister, who bellows
their rage, their cabal
into the hollow forest behind their motel room.
Tereus

It’s strange to think—the man
looks out at the same night,
the same sky, the same moon. A black
curtain spotted with white dust
hugs his shoulders as it hugs
his wife’s shoulders, her sister’s, too. It
covers them all, buries them in secrets
and plotting. Here on in, everything
will have to be reconstructed, unfolded
and moved back to significance. There is no time
to wonder at the meaning of guilt
when you are the guilty. There is no time.
Itys

When you find him you could almost
dismiss the whole affair, so light
is his body: it could be made
of straw or cottonballs, his skull
a crab apple you could finish
under one heavy boot. Father
knew the revenge that would tear
at Mother’s heart, dropped the treacherous offspring
into an overflowing bathtub. Father
knows the newspapers, the history books,
the poets, too, will preserve him; faithful,
they will ruin the harridans, too.
The boy released his life
more quickly than it came to him—
whatever you might hear,
he was no one’s afterthought.
Swallows

When they stretch their wings and drop
they are lifted—feathered machines,
their bodies steel widgets
gaudy with colour against the monochrome
of the sky. They make sounds like music
and mourning, as if remembering something
that everyone should hear. When you listen,
you could almost see it, the bloodshed, two kingdoms
felled and no child support to pay,
visits in prisons where orange chairs
daub the muck of the everyday—all this
a cinema in crimson behind your eyelids,
and the bodies with nowhere left to go,
gestures towards freedom stilled
like bones angled in tree resin.

Annick MacAskill‘s poetry has appeared in journals including Room, CV2, The Fiddlehead, Arc, The Puritan, and Lemon Hound. Other poems have been longlisted for the CBC’s Canada Writes Poetry Prize. She lives and writes in Kitchener, and is the author of the chapbook Brotherly Love: Poems of Sappho and Charaxos (Frog Hollow Press, 2016). This poem originally appeared in Room issue 39.3 and has been republished here as part of the No Comment project.