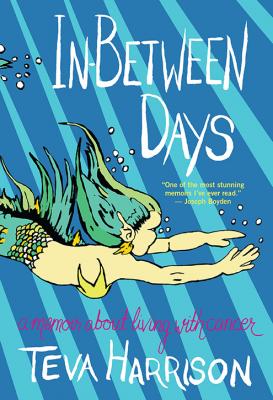 By recounting the unresolved hurt of her past, and facing the uncertainty of her future, Harrison—who was diagnosed with advanced metastatic breast cancer in 2013—has found one way to reclaim power from the “bogeyman” that is her illness.

“It’s the unspoken that is most frightening,” writes Teva Harrison in the preface to her deeply personal graphic memoir, In-Between Days. By recounting the unresolved hurt of her past, and facing the uncertainty of her future, Harrison—who was diagnosed with advanced metastatic breast cancer in 2013—has found one way to reclaim power from the “bogeyman” that is her illness.

Combining comic-book style illustrations and short essays, Harrison brings her readers into the liminal spaces she occupies between wellness and sickness, awareness and fatigue, and life and death. “Cancer thrusts you into the centre,” she writes, “while simultaneously pushing you outside.” The opening illustration depicts various angles of her hands as she ponders living on the edges of uncertain spaces—a recurring image that appears again when the side effects of cancer drugs stiffen her hands to “deformed claws.” The motif is powerful in that Harrison—who is a visual artist, writer and cartoonist—loves making things with her hands, but is denied that freedom.

Harrison’s series of black-and-white drawings evoke a primitive, sketchbook quality, while the accompanying reflections resemble personal diary entries. The memoir, composed of three sections, is divided into thematic topics, such as diagnosis and treatment, marriage and family, and hopes and fears. Unlike a diary, In-Between Days does not adhere to any chronological order, but rather a loosely structured collection of thoughts—like unraveling pockets of memories—that shine light on some aspect of Harrison’s life.

The illustrations are heartbreakingly honest—and even strangely uncomfortable—as they open a window to different parts of Harrison’s journey. Some panels show her looking at, and talking directly to, the reader as she curls up around the bottom of a toilet to vomit; others are vignettes of the beloved women in her life who were taken in their prime by cancer. It’s a gut-churning fear that keeps Harrison awake at night, holding onto her husband for dear life, “both of which are all [she] ever wanted.”

And yet there is hope and solace in knowing that one’s legacy is much bigger than cancer. For Harrison, there is still so much beauty in the world—in her loved ones, and through drawing and writing. The memoir is a call for self-compassion, recognizing how suffering can be invisible. In the final section, Harrison writes that “sometimes magic comes in unexpected forms.” In-Between Days is one of them.

Nadia Siu Van is a Toronto-based writer and editor. She is currently the reviews editor at Shameless magazine.