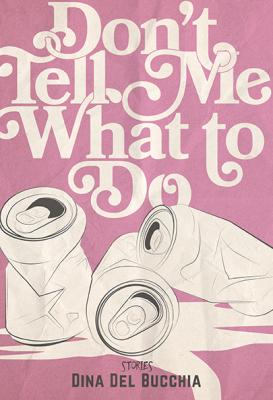 Don’t Tell Me What to Do

Each of the fifteen stories, mostly populated by female protagonists at less-than-perfect moments in their lives, show the work of a generous writer committed to creating characters unapologetically being themselves in all their flawed, misguided glory.

In most books of short stories, there are two or three pieces (if you’re lucky) that stand out, define, and carry the rest of the collection. The other pieces become background music, unobtrusive but inconsequential. In Dina Del Bucchia’s collection, however, there simply are no B-sides. Each of the fifteen stories, mostly populated by female protagonists at less-than-perfect moments in their lives, show the work of a generous writer committed to creating characters unapologetically being themselves in all their flawed, misguided glory. These are irresistible, if not exactly admirable, women: the kind you gossip about and wish you actually knew.

In “Haul” and “Cold Cuts”—two of the darker stories in the collection—a high school freshman and an unemployed twenty-something each go to extreme lengths to fill a void in their lives. The unnamed character in “Haul” is obsessed with creating haul videos based on her endless fashion shopping expeditions. She frantically tracks her views, likes, and comments, as her closet bulges with her purchases and her schoolwork suffers. Her goals: “stay organized, make good impressions, try hard, be seen.” The imagery in the final paragraph of the story, the girl’s body “fully woven into the tangle of textiles,” is chilling.

The other, Natalie, “young and from a broken home,” has been without work for some time after being fired from her print shop job for creative use of the photocopiers. Not willing to rely on her live-in boyfriend’s income to buy groceries, she is determined to be productive: “We need to keep ourselves fed, and I’m a go-getter, but no one around seems to want to acknowledge that.” Natalie’s unusual version of productivity—a kind of entrepreneurship in her estimation—involves crashing funerals and stealing food. When a near-fatal accident interrupts her go-getting behaviour, the callous Natalie is shaken, but seemingly undeterred.

Other stories in Don’t Tell Me What to Do feature women searching for release from their present unsatisfactory circumstances, frequently involving the men in their lives. In the collection’s title story, Alex is a young woman living in a small, slow Alberta town with her much older boyfriend, Robert. They spend evenings at Gus’s bar getting drunk, and Alex’s boredom with her provincial existence and its lack of fun is palpable. When she discovers Gus’s hidden stash of coins, she makes off with thousands and heads for excitement at the West Edmonton Mall. Alex’s efforts to avoid capture and enjoy her brief moment of freedom and adventure are humorous, strangely laudable, and definitely sad.

In the collection’s final story, “The Gospel of Kittany,” a model-turned-cult leader instructs one of her disciples as they look at photos of her female followers on social media: “‘Look at these women,’” she says, “‘Really look . . . See them’.” And that is exactly what Del Bucchia requires of us when we read her brilliant fiction debut.

Dana Hansen is a writer, reviewer, and professor in the English Department at Toronto’s Humber College. Her criticism has appeared in Quill & Quire, Literary Review of Canada, The Winnipeg Review, the Chicago Review of Books, and elsewhere. As the editor-in-chief of Hamilton Review of Books, she lives in Waterdown, Ontario.