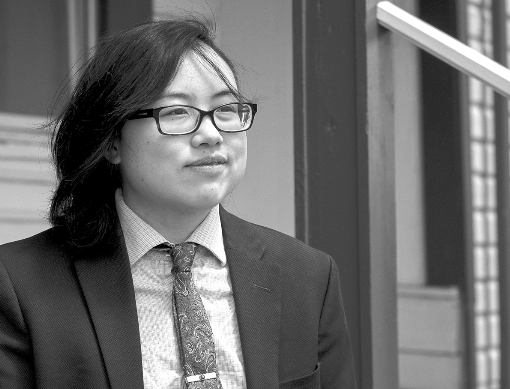 Here is our full interview with disability justice advocate, excerpted in our issue 43.3, Neurodivergence.

[Lydia, a young East Asian person, sits outside on wooden steps in front of a clapboard building. They have long hair on one side and a shaved head on the other. They are wearing glasses, a navy blue blazer, blue paisley necktie with tie clip, collared shirt, and dark dress pants. They look pensive. Photo by Gabriella Demczuk.]

Lydia X. Z. Brown is a disability justice advocate and writer whose work has focused mainly on violence against multiply-marginalized disabled people. They are co-editor and visionary behind All the Weight of Our Dreams, the first-ever anthology of writings and artwork by autistic people of colour and otherwise negatively racialized autistic people, published by AWN.

They were interviewed by Room 43.3 editor, Rachel Thompson and an excerpt from their interview appears in the issue. Here is the full interview:

ROOM: Can you share a bit about the concept and philosophy of neurodivergence?

The terms neurodivergent and neurodivergence (referring to people) were coined by autistic activist Kassiane Asasumasu, and their predecessor term neurodiversity (referring to the biological reality that people’s brains are different—and that that’s not a bad thing) was coined by sociologist Judy Singer.

Neurodiversity is also a philosophy and a movement based on the idea that all people are fully human no matter what kind of brain they have. In other words, no type or degree of disability can ever make someone less worthy of existing in the world, or less deserving of the support and care they need and want. Neurodiversity as a movement has its roots in the older developmental disabilities self-advocacy movement and has also built on the disability rights movement and the independent movement. It is connected to the mad pride movement and the psychiatric survivors’ movement, and it is a core component of the disability justice movement. The terms neurodivergent and neurodivergence (referring to people) were coined by autistic activist Kassiane Asasumasu, and their predecessor term neurodiversity (referring to the biological reality that people’s brains are different—and that that’s not a bad thing) was coined by sociologist Judy Singer.

ROOM: What are some essential texts on autism and autistic writers of colour?

LXZB: There are so many to name, but I’ll just list a few!

Specifically by autistic writers of colour:

ROOM: Who are the autistic writers of colour whose work you admire?

LXZB: I’m inevitably going to be missing many people, but just for starters, I love the writing of Cyrée Jarelle Johnson, Talila A. Lewis (TL), Leah Lakshmi Piepzna-Samarasinha, Azza A. Altiraifi, nina la poubelle (also published as b. binaohan), and Sara M. Acevedo.

ROOM: Whose writing you wish were more well known?

LXZB: I wish more people knew about all of the incredible autistic people of colour whose work is in All the Weight of Our Dreams, as well as the many who are sharing their offerings elsewhere!

ROOM: After publishing All the Weight of Our Dreams, you started a fund for autistic people of colour. What are your biggest dreams for the Fund and what impact has it had already?

LXZB: My biggest dream for the Fund is that one day it will be self-sustaining. For the last two years, we’ve struggled to get by with almost entirely small donations from directly impacted community members who are disproportionately underemployed, unemployed, and precariously employed. We give out almost all of the money we receive almost as soon as we receive it. But since we are also an all-volunteer team, it can be hard to respond quickly to everyone who contacts us as well, so in the future, it would be amazing to be able to pay autistic people of colour directly to help manage the day-to-day work to keep it running. To date, we’ve awarded over $35,000 to hundreds of autistic people of colour around the world to help people escape abusive situations, start school, look for work, get help with childcare, make rent, pay other bills, go to therapy, buy art supplies, and more.

ROOM: What’s coming next for you and your work in autism advocacy?

LXZB: Who knows? I guess we’ll all have to figure that out together.

Rachel Thompson is the editor of Room 43.3, Neurodivergence, and a neurodivergent writer. She offers free resources for luminous writers at rachelthompson.co/free