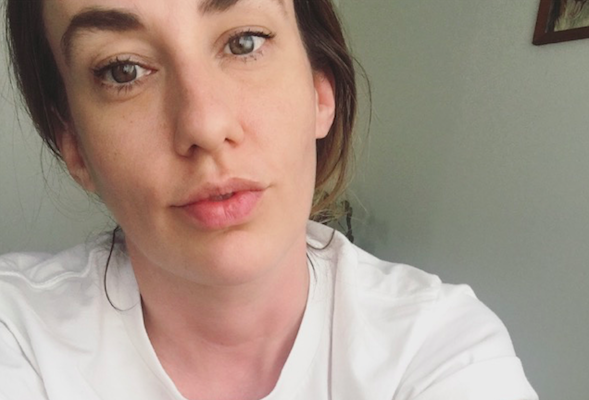 Amy could be heavy-handed with obscure trends like silver hair or emerald green lipstick but when she showed up for brunch that Sunday morning, it was plain as day that she was dead. She was gorgeous but years younger than the rest of us, which may have played a part in why we were slow to warm to her when she began dating someone in our group. She had velvet skin and sweet round cheeks. Her arms were covered in a smattering of tattoos. Arrows and hearts and the outline of a cactus that said ‘free hugs’ underneath. She wore wide-brimmed felt hats and culotte jumpsuits and had a side business making capes out of old brocade drapes. But this day was different. Ryan gasped as Amy rounded the corner, bloated with a hue of sea foam, her tongue poking through her lips on one side of her mouth.

Nobody knew what to say so we tried to act natural. After all, she had made it out to meet us for brunch, and we’d been trying to get into this place for weeks. Everyone had been talking about this candied bacon and caramelized shallot French toast crepe casserole with bourbon infused cashew butter that is to die for, or…sorry. I guess I shouldn’t say that. Anyways, we’d been waiting a long time to eat here.

She tried to discretely push her tongue back inside her mouth. “It was a rough week.” She rolled her eyes, and one came back about two full seconds before the other. “Work has literally been killing me.”

Amy drove us crazy with her constant hyperbole and grating vocal fry. Everything was always literally killing her. Younger millennials are like that.

She leaned in for a hug, and when I put my hand on her back, she was as cold and hard as a tree stump under her vintage wool trench coat.

I don’t know what I thought she’d say. If she’d offer up the bad news herself and save us the discomfort. This is one of those brunch places that won’t seat you unless your whole party is present, so god, I don’t know, maybe she didn’t want to let us down.

Amy lowered her head to one shoulder, attempting to stretch her neck. “I’ve got to get back to Bikram. Sitting at a desk all day is murder on my joints.”

There were a dozen or so other people scattered outside the restaurant, also waiting for tables. I could feel them trying not to stare as they carried on their conversations. I’m certain they were hoping we’d leave and the wait time would drop.

I thought about saying something but I make a point of pausing at times like this to consider the ethics of a situation. Like whether or not you tell a friend that their partner is cheating on them. There are so many factors to think about and I doubt it’s ever cool to tell someone that they are dead with a crowd of strangers standing around. There was this one time when a bunch of us were out, and Alex’s fly was down. I noticed when we were about to leave this brewery tasting we were at. I didn’t tell him until after we left because I thought if I told him right then it would be more embarrassing because the same people would still be around. He was confused and angry at first, but when I explained my reasoning, he totally got it. He said so. And I know he did because after that there was this time where he didn’t tell me that while I was chatting with this guy I was into that my nipple was showing. I was so embarrassed, but I guess it would’ve been worse if he told me right away. I know that isn’t comparable to being dead but I can only draw from the experiences I’ve had.

None of my options were good. How was I supposed to tell her she was dead? Have you ever delivered news as bad as that? I’m pretty sure there’s no hotline for this. It was too late for an ambulance. If I called the police and said, like, hey, my friend is dead, then I’d be the one reporting this dead body. They’d probably take me in for questioning on an empty stomach and you know they’d use some shady cop tactics on me and god knows I’d end up being the focus of some eight-part Netflix series. Besides, the brunch place would turn into a crime scene and we’d have to move to another city if we ever wanted to eat brunch again. I’ve heard of people being brunch-blacklisted for less. And I can’t drive her anywhere because, first of all where does an undertaker even live and, second of all, hauling some dead body around in your car has got to be all kinds of criminal. I also just don’t believe that Amy would want me to be inconvenienced by her being dead at brunch. Amy has always been chill. Figuratively and then literally.

Inside the restaurant, Amy got foul. The heat was cranked and the body goes quick when the temperature is high. We ordered a round of these crazy popular Cajun jerky barbeque Caesars and sat for a minute watching people pass by in horror.

“God,” Amy said. “This place smells like shit! It doesn’t usually smell like rot in here, does it?” She began looking around for our server. “Do you think they’d move us to a different table?”

“I’m sure it’s the whole place,” Ryan jumped in before Amy flagged anyone down. “It’ll probably smell no matter where we sit.” Alex hadn’t said a word since Amy arrived. He just sort of nodded, his lips so pursed they’d all but disappeared.

At this point I was so hungry I was delirious. I’m very sensitive to changes in my blood sugar and I was starting to feel a bit out of it and I thought, shit, what if Amy is nursing a hangover and getting kind of ripe and I’ve come up with this insane idea that she’s dead because she doesn’t look flawless, like, once in her life. It’s pretty messed up to assume a woman has died just because she looks a bit rough. As a feminist, honestly, it is so unsavoury for me to be jumping to these conclusions based on another woman’s physical presentation. So I made the logical decision to wait, get some food in my stomach and stabilize my blood sugar, and then re-evaluate whether or not Amy is dead.

When the server arrived with our drinks Amy looked up to say thank you, and her tongue flopped back out of her mouth, hanging off to one side like a dried out old liver from a Thanksgiving turkey. The server left without taking our order, making a beeline right through the kitchen and out the back door. Amy tucked her tongue back in, aware something was wrong but nowhere near knowing how bad it was.

“What’s her problem?” she said. She took a sip of her Caesar and Clamato juice slid out both of her nostrils.

“Hey, Amy, are you sure you’re feeling alright?” I asked. iPhone cameras closed in around us. At that point, it didn’t seem like we were going to get to try the candied bacon and caramelized shallot French toast crepe casserole with bourbon infused cashew butter anyways so I thought I’d ask and see what she said.

“Can you not?” She snapped back. “I’m exhausted. I told you, I can’t even describe how busy and stressed I am. You’d seriously die. It’s just too much.”

“Okay, I was just asking.” I leaned back.

A new server crept towards our table, the rest of the staff huddled across the restaurant. I gave him a sympathetic smile and hoped that if they asked us to leave they’d at least let us get take-out. Brunch places are super weird about takeout when they have a long lineup, but we’d waited for a table, so I don’t think it’s unreasonable.

Amy made the server run through all of the vegan options on the menu before settling on the beef brisket. It was impressive, the way he got through the entire menu without stopping to inhale. We ordered another round of Caesars and tried to pass the time by commenting on the decor, which I would describe as mid-century-decrepit and an obvious attempt to appeal to hipsters.

I am sure our order was rushed and soon the server was on his way to our table with our food. His hands shook and he kept his eyes up as he approached. I could see the glisten of candied bacon moving towards me. I could fucking taste the cashew butter, the delicate notes of bourbon, the subtle, crisp edges of brioche. I glanced back towards Amy, hoping she could hold it together for a little bit longer. Goddamn Amy. The busy legs of a blow fly wiggled and strained until its fat body popped like a cork out of her ear canal. Champagne would’ve paired nicely with my meal. For a second I did think about a mimosa. Then I screamed, knocking my chair over as I jumped back. Amy gasped, her body now rigid in her seat. A long heavy wheezing came from deep within her torso and everyone in the restaurant went silent. She looked up at me as if to ask what was happening, and her head snapped clean off. Hit the floor like a fucking sandbag. That was Amy. It was heavy-handed but at least it was clear.

I looked down at her. Her pewter hair slung across my foot. You should’ve seen the mess it all made. They must’ve put a quarter pound of candied bacon on my French toast. There was cashew butter everywhere.

Michelle Kelm is a Vancouver-based writer and professional dog-mom. She has an MFA in Creative Writing from the University of British Columbia and is currently working on a collection of flash fiction and prose poetry.