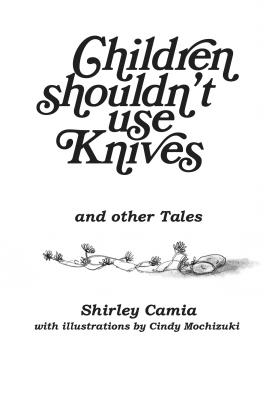 Children Shouldn’t Use Knives and Other Tales

Children Shouldn’t Use Knives and Other Tales shreds the yellow ribbons of childhood sentimentality and, instead, offers an exploration of what it feels like to be small and vulnerable in a stormy world.

I’m not nostalgic for childhood. Childhood was terrifying—the lack of agency, the grownup world’s opaque set of rules, the playground’s ferocious pecking order, the fear of real and imaginary things. And so I’m grateful that Shirley Camia’s Children Shouldn’t Use Knives and Other Tales shreds the yellow ribbons of childhood sentimentality and, instead, offers an exploration of what it feels like to be small and vulnerable in a stormy world.

Children Shouldn’t Use Knives acknowledges the dangers and threats that haunt children beyond the realms of nightmares and classic scary fairy tales. For example, “In the Spring” does away with stereotypical optimistic associations with the season:

what defences
does a young
girl have

as anger
barrels down

the muzzle of a gun

Mochizuki’s illustration of a young child kneeling and holding an unidentifiable implement takes on a dark valence to accompany Camia’s brusque poem.

Similarly, “Life’s Lessons” evokes with a few short lines a difficult story about a child lying about the whereabouts of her uncle:

what she said
to the men
at the door

With only eleven brief poems, the collection is very short. While I appreciated Camia’s invocation of well-known children’s literary authors who don’t shy away from the confusion and trouble of childhood, I did find the extracts drowned out Camia’s own voice at times—they were often as long as the poems themselves. I found I wanted a few more poetic moods from Camia. I wanted to inhabit her and Mochizuki’s beautiful, sombre world for a few more beats—just like when I was a child and I couldn’t stand having a story come to an end.

Adèle Barclay’s debut poetry collection, If I Were in a Cage I’d Reach Out for You (Nightwood, 2016), won the 2017 Dorothy Livesay Poetry Prize. She is an editor for Rahila’s Ghost Press and the 2017 Critic-in-Residence for Canadian Women in Literary Arts. She teaches at UBC.