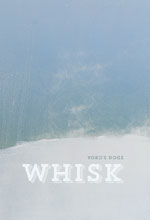 Reviewing a poetry book by a collective in a magazine created by a collective is a lovely fit, and Whisk by Yoko’s Dogs is an utter delight to read. Pedlar Press has produced a beautiful little book full of gems.

The members of Yoko’s Dogs work together on all the poems to create a truly group effort. No poem is credited to a specific poet, since each poem is worked on by all four women in the group. Evidently, a format was selected, one modelled on haikai no renga, a series of linked poems similar in form to what most readers of poetry in English would call haiku.

The poems predominately use short words, gathered into short lines, in stanzas of two or three lines (which alternate not only through the individual poems but also through the entire collection), in poems of four (the most frequent) to twelve stanzas. The master of the haiku, Basho, appears in “Ukiyo-E” (translation: pictures of the floating world): “the bowl’s empty/ Basho sleeps in a windowless room,” and while the Japanese influence is evident, the Canadian landscape is the focus. The entire collection or sequence could be seen as pictures of the worlds the Dogs inhabit.

One of the worlds consists of nature and animals and food, the basics of life in many ways. The Canadian fascination with weather is captured in many of the poems, and some of the most arresting have to do with winter.

In “The Weather,” for example, the following lines are impossible to forget: “tufts of snow on bare branches / forecast marshmallows on sticks,” and Whisk is packed with such memorable images. The simplicity of the diction belies the richness and depth of the visual components. In “Red Spotted Eft,” which begins by saying “briefly, it’s easy / to be ruthless,” the shift to delicacy keeps us in the largely gentle world of the book:

a man caresses a fledgling sparrow

with his bus pass

These small, precise poems are gems to be savoured. The words and their placement are paramount. Punctuation is minimal; no periods are used and commas are infrequent. The most common mark is the dash, which smoothes the path of words as it often marks the traditional “cutting” of the haiku form. The Dogs play with the form, and while this creation was no doubt much work, it’s evident they are having fun. Better yet, the fun is being passed on to readers who must surely marvel at the silky composition. I loved the final lines of the book, which allude to master imagist poet William Williams’s “This Is Just to Say.” Whisk is about saying—and cold sweet plums of poems.