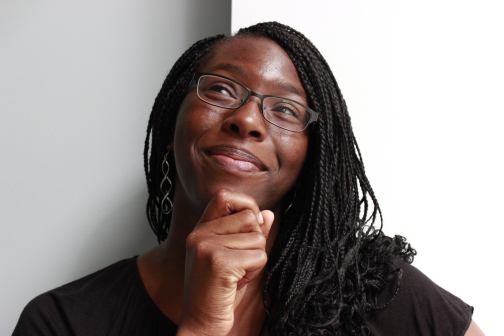 We Got Next: Emerging Black Writers You Should Be Paying Attention To

At Room, we don’t just look to the past but we also look to the future and it’s looking very bright. Here are some of our favourite black emerging writers who you should be paying attention to. Image: Chimedum Ohaegbu.

At Room, we don’t just look to the past but we also look to the future and it’s looking very bright. Here are some of our favourite black emerging writers who you should be paying attention to.

Angela Wright is a writer and political analyst whose writing explores history and identity. Her writing has appeared in Catapult, The Fiddlehead, The New Quarterly, and The Brooklyn Quarterly. Wright is also featured in the forthcoming anthology, Black Writing Matters. Wright is on the rise and we can’t wait for her forthcoming memoir, which explores grappling with the effects of hate crimes and understanding how interpersonal and intergenerational trauma impacts communities and how they can heal.

Lue Palmer is a storyteller and performer with origins in Portland, Jamaica who writes through a speculative lens. Boileau’s writing has been featured in From The Root Zine and The Unpublished City II. What’s next for Boileau? She is currently working on a manuscript of short futurist fiction, A Whistling Woman.

Rabbit Richards is a New York born performance poet. Rabbit’s stories and poetry blend the politics of race, love and gender with the emotional grounding of lived experience. Richards is a member of the Kalmunity Vibe Collective and a practiced improv artist. Richards is also the two time captain of Montreal’s Throw Poetry Collective and the 2015 winner of the Underground Indies poetry slam. Richards is a storyteller at heart. She will appear in two events at the 2019 Growing Room festival.

Chimedum Ohaegbu currently attends the University of British Columbia where she studies  English Literature and Creative Writing. She is Uncanny Magazine’s assistant editor and the recipient of the full 2017 Tan Seagull Scholarship for Young Writers and a 2018 Katherine Brearley Arts Scholarship. She was a finalist in Outlook Springs’ 2017 Creative Non-Fiction competition. Her work is published or forthcoming in Strange Horizons, This Magazine, The Ubyssey, Honey & Lime, and The Capilano Review. You can follow Chimedum on Twitter @chimedumohaegbu. (Photo credit: Logan Peters). She will appear in Growing Room’s Youth Reading on March 12, 2019.

Faith Arkorful is a Toronto-based writer whose work is published in Hobart, Arc Poetry Magazine, Canthius, and The Puritan and others. Her poem “Vacation” was featured the Best Canadian Poetry in English 2018 anthology.

Charlotte Henay is a storyteller and researcher. She works with poetry, lyric and visual essays in writing about cultural memory to counter extinction myths. Her poem “for my sister” was featured in Turtle Island Responds, a series that gives writers the opportunity to respond to current events. Henay’s professional background in critical race theory and her personal experience of being exiled inform her work and journey through the interstices of blackness and indigeneity, imagining Afro-Indigenous futurities. Her writing has appeared in Demeter Press’s Mothers & Daughters, C-Magazine, No More Potlucks, Feral Feminisms, and Decolonization, Indigeneity, Education, and Society.

Karen Lee is a lyric-driven storyteller who is devoted to social justice and reclaiming voice against tyrannies that silence. Her works have been featured in Black Girl Talk and The Humber Literary Review. In 2017, her poem, Side Road Swamp, became Side Road Swamp – Poesia, Opus 8 No 2, composed by Francis Patrick Ubertelli. In 2018, Lee’s poetry was shortlisted for the Small Axe Literary Prize.

Terese Mason Pierre is a writer, editor and organizer based in Toronto. Pierre is the current poetry editor of Augur Magazine, a Canadian speculative and surrealism literature and art magazine in Toronto. Her work has appeared or is forthcoming in The Hart House Review, The Brasilia Review, Verdancies Journal, Cosmonauts Avenue and Train Poetry Journal, among others. Pierre has a chapbook forthcoming with Anthruther Press in Fall 2019. When she “grows up,” she would like to become a medical doctor, a published author, and an advocate. You can follow Terese on Twitter and Instagram @teresempierre. Photo credit: Gesilayefa Azorbo.

Rowan McCandless is a writer whose work has appeared in Room, Prairie Fire, and The Malahat Review. She is the winner of several contest prizes including Room’s 2017 CNF Contest and The Malahat Review’s Constance Rookie CNF Prize. She also placed 2nd in Prairie Fire’s 2016 contest. You can expect even more greatness from McCandless: she has new creative nonfiction in the Winter 2019 issue of The Fiddlehead and in the forthcoming anthology Black Writing Matters.

Ardo Omer is a writer and editor. Omer has written about pop culture for publications like Teen Vogue, Book Riot and Ms En Scene, and covered events like the Toronto International Film Festival (TIFF) and the Toronto Comic Arts Festival (TCAF). Her comic Shift was featured in the comic anthology, Osgoode as Gold.Omer is currently working on a forthcoming self-funded zine, We Need to Talk: Examining Women of Colour in Superhero Media, out later this Spring. You can follow Ardo on Twitter @ardoomer. To support her work, learn more. Photo credit: Emily Jung.