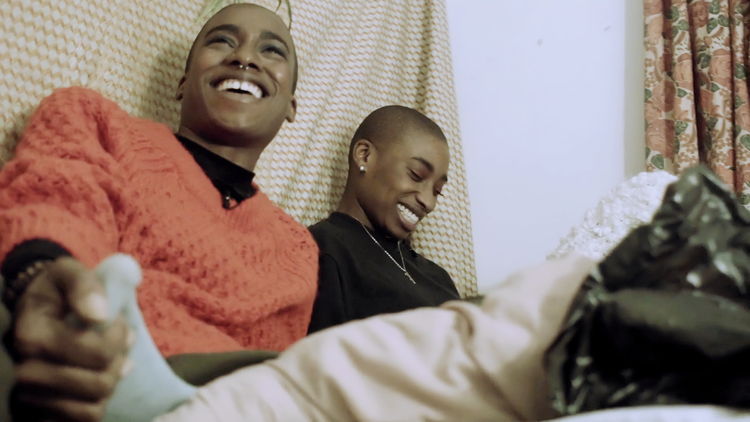 A selection of reviews from the 30th Vancouver Queer Film Festival (image from “Talk the Ting” by Shelby Zoe Coley).

This powerful documentary by debut director Sarah Fodey, sixteen years in the making, tells the story of the government-run witch hunt to purge LGBTQA+ individuals from military and civil service through a series of interviews with survivors, beginning with the background in the late 1940s, through the purges of the next four decades, and ending with Justin Trudeau’s historic apology to survivors on November 28, 2017. The result is heart-wrenching; if there were a pair of dry eyes in the theatre, they weren’t in my row—or on the screen. Multiple interview subjects broke down as they recalled being spied on, interrogated—as teenagers and barely-adults in their twenties—and eventually expelled from their careers. One interviewee describes it as torture; it’s hard to disagree. “We just wanted to be good people,” one woman explains. They were kids who volunteered to serve the country they loved because they believed it was the right thing to do, and that country refused to love them back, fabricating a myth that queer individuals were a security threat (because they could be blackmailed by Soviet spies) as a pretext for prejudice (the irony, the film points out, is that straight men carrying on extramarital affairs were a far greater security risk than LGBTQA+ servicemen and women).

There are a few disappointments; according to the Q&A, only survivors, not perpetrators, agreed to be interviewed, which of course is not the fault of the filmmakers, but rather of the country and the perpetrators themselves—yes, the film includes Trudeau’s apology, but I desperately wanted to hear from someone who was there and had the hindsight to recognize that what they participated in was wrong (perhaps that’s just me, but an audience member did inquire as well). Perhaps this feeling comes in part because Trudeau’s apology feels inadequate for the hurt and damage caused. As one woman says, she never wanted an apology—”The wound is too deep.” Indeed, The Fruit Machine cannot capture the full depth of this wound. The Q&A highlighted experiences that did not make it into the film (I won’t go into details because I did not have the opportunity to ask those who shared permission to repeat their stories). In addition, all of those interviewed appeared to be white (or white-passing) and cisgender, which left me wondering about the experiences of those who faced additional marginalization.

While this is a sobering film, and one that may be triggering (especially when survivors recount their experiences of sexual assault), it is also a tale of brother and sisterhood, and of resistance and strength. And there are moments of levity, as interviewees deliver devastating one-liners and withering critiques of the device that gives this documentary its name and the questions asked to identify homosexuals (do you try to do well in school?). As one man recalls quipping to his interrogators when they ask him to name other queers, “I’d rather be a traitor to my country than a traitor to my friends.”

The Fruit Machine is a critical film which documents a horrifying (and horrifyingly recent) history that has been too easily forgotten and overlooked by the Canadian public. I hope it has a long life as an educational tool.

“I cannot remember her accurately, only indefinitely,” the narrator says, early in this strange and poetic short film. Reality Fragment 160921, an experimental short by April Lin and Jasmine Lin, mixes video clips (many which look as though they were taken with an iPhone) with photography, screen-shares from a laptop, instant messages, and a riveting, poetic narration to create a layered love letter, an experimental film which reflects on queer love, identity, Asian diaspora, and the imperfection of our recollections. The editing reflects the flawed, fragmented, and mutable nature of memory—images blend into each other, moments are layered. While at times I found the visual elements a little overwhelming, the editing choices complement the content and I have no doubt that the film would hold up on multiple viewings; each time, the eye would find new fragments to attend to—just as the narrator cannot recall her lover accurately due to the limits of memory, and therefore can recall her in infinite ways, Reality Fragment can be watched, and understood, indefinitely. It’s a beautiful thing.

Talk the Ting, a short documentary (about forty-five minutes) by Shelby Zoe Coley, succeeds on the vulnerability, thoughtfulness, and sense of humour of its subjects, UK-based podcast trio Sistren (Michelle Tiwo, DJ Tiwo, and babirye bukilwa). The camera follows Sistren for a week, through the recording of their first podcast episode, lovingly depicting the intimate bonds between the three sister-friends while they touch on topics such as mental health, family, self-care and caring for others, and the power of queer Black sisterhood. In many ways, this film serves as a promotional tool for the podcast, and a successful one; I went into the theatre not knowing what to expect—I hadn’t heard of the podcast, which, at the time of this writing, includes three episodes on Soundcloud and eight episodes on Transmission Roundhouse radio—and left keen to hear more from these smart and very funny women. I enjoyed every minute of this film, despite my complete lack of familiarity with their work prior to the screening.

Talk the Ting is a film full of love and joy, the kind of warmth that breaks through the screen and fills the theatre. In this sense, the documentary resists review; the beauty of Talk the Ting is that it gives a glimpse into the complexity and joy of a loving sisterhood (both biological and chosen), and that intimacy cannot be reviewed, only appreciated.

You can request a screening on the film’s website, and if you enjoy “queer, hilarious no-nonsense realness”, I encourage everyone to go check out their podcast: http://www.roundhouse.org.uk/transmission/radio-shows/sistren/ 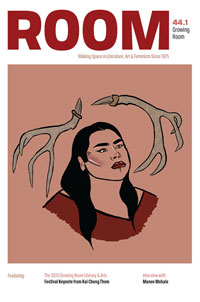