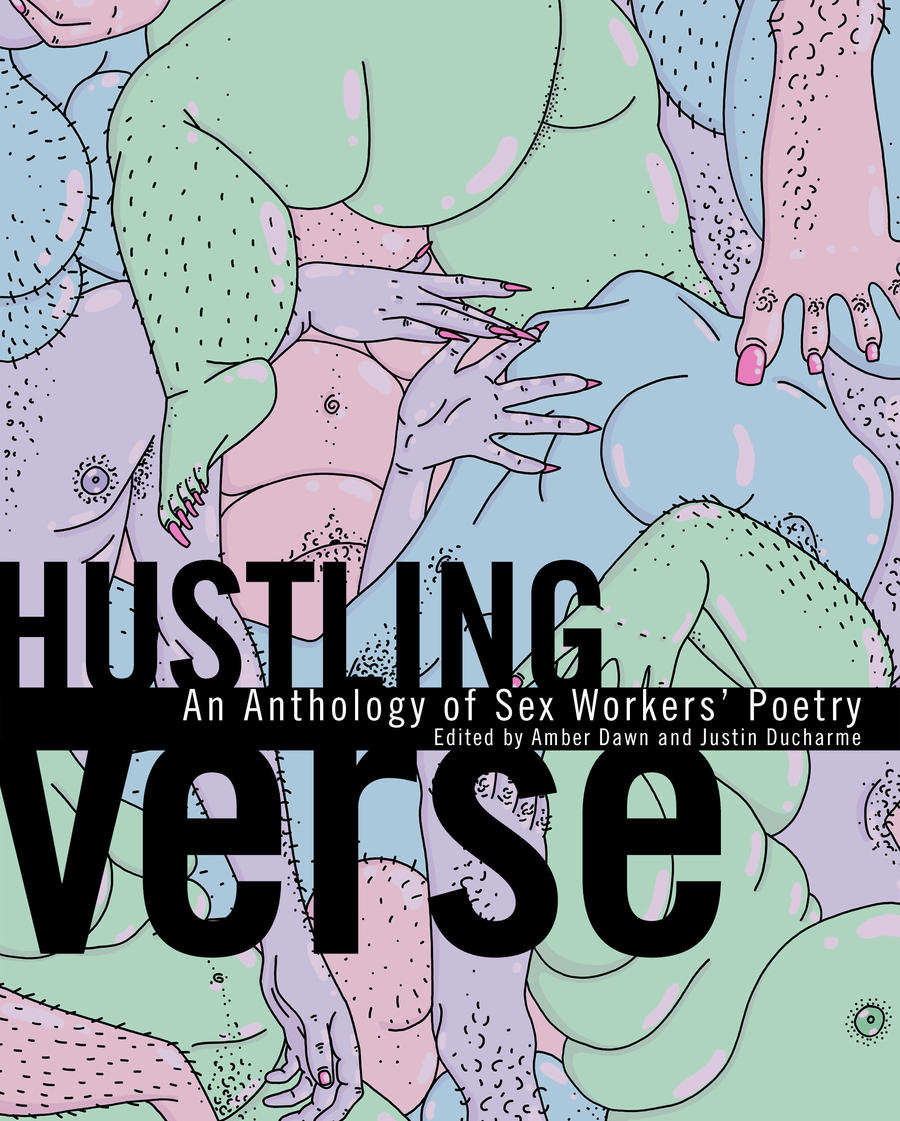 The Poetics of the Hustle: An Interview with Amber Dawn and Justin Ducharme, Editors of Hustling Verse

Hustling Verse is a vital and impressive collection that unites poetry and activism. It makes clear that sex workers, once objects of scrutiny, continue to gain strength as the subjects and creators of powerful art. As poet Milcah Halili puts it, “whores don’t let public mockery stop our glow.” Lauren Kirshner connected to co-editors Amber Dawn and Justin Ducharme to discuss the story behind Hustling Verse and the place of poetics in sex worker collective action.

Over the last decades, sex workers have created a vibrant body of literature that displays their talent and authority. From magazines to memoirs, novels to anthologies, these works – and many others – make clear that there is no “typical” sex worker story, but many unique stories that all deserve to be heard.

Hustling Verse is the newest addition to this trove and makes poetry a tool for challenging the stigma that keeps sex workers silenced. Edited by Amber Dawn and Justin Ducharme, the collection soars with urgency and originality as it unites over 50 self-identified sex workers from across Canada, the US, Europe and Asia. At over 200 pages, Hustling Verse is rich and multi-faceted. Avoiding simplistic stories, the poets explore the benefits and challenges of their work from a range of intersectional perspectives.

Notably, the collection takes a labour focus. Poets describe motivations for entering and exiting sex work, bad dates and tender clients, departed friends and new allies. Many shine a light on economic motivations, like the poet who describes how sex work beats picking strawberries for minimum wage. Some poets depict how sex work can include intimacy and affection and share realities with work in other service industries. From blank verse to free verse to prose poetry, the poets take formal approaches as diverse as their subject matter.

Refreshingly, Hustling Verse explores sex worker friendships and solidarity, images that are often absent from mainstream media (cue the cliché of the lone sex worker under a streetlamp). But the collection also delves into trauma and the emotional costs of doing outlawed work. Some poems overtly address how it is criminalization – rather than sex work itself – that pushes sex workers to the fringes of society.

Hustling Verse appears at a time of increasing activism as sex work is finally being recognized as an issue of human rights. Recent watershed moments include Amnesty International’s backing of decriminalization in 2015. Yet, sex workers are still denied legal rights, trolled and shut down on social media, and face barriers to self-expression. Last April, the passing of FOSTA-SESTA increased the policing of sex workers’ activities online.

In this climate Hustling Verse is a vital and impressive collection that unites poetry and activism. It makes clear that sex workers, once objects of scrutiny, continue to gain strength as the subjects and creators of powerful art. As poet Milcah Halili puts it, “whores don’t let public mockery stop our glow.”

Lauren Kirshner connected to co-editors Amber Dawn and Justin Ducharme to discuss the story behind Hustling Verse and the place of poetics in sex worker collective action.

LK: One of the things I admire about Hustling Verse is how it covers a rich range of subject matter – from trauma and police aggression to sexual agency and friendship to business and workaday transactional sex. Can you tell us about the process of creating the collection, particularly, how you brought together such wide-ranging voices?

AD: We knew that we’d never be able to edit an anthology that is truly representative of the vast identities and experiences of sex workers. Sex workers are everywhere and are everybody, literally Every Body. Nonetheless, publishing a wide-ranging voices was our goal, and further to this we were particularly interested in publishing work from sex workers who had street-based and/or solo-work based experiences because these workers have been made particularly invisible. Sex worker organizations across North America helped us spread our Call for Submissions—both well-established organizations like Maggie’s in Toronto and newer ad-hoc groups like a word-of-mouth meet-up in Brooklyn. In a few cases, Justin and I liaised with sex work support workers to extend our reach.

The fact that both of us are out and have bodies-of-work that creatively address sex work is a large contributor for how well we were able to connect with our diverse contributors. By us, for us projects will always be able to build trust and produce varied and authentically voiced work in ways that outsider-lead projects never will. I’ve read dozens upon dozens of books and articles about sex workers written by outsiders, and all of them fall very short on credibility and nuance. Hustling Verse offers a by us, for us poetic exploration of sex work.

LK: Justin, you write in your foreward, “When people are given the reins to tell their stories in the way they choose, it has an impact on the way they navigate the world, the way they value themselves” (p. 23). What barriers do sex workers still face when telling their stories?

JD: Amber Dawn touches on this in her foreward as well. We’re both talking about the gatekeeping we see with stories about sex workers. We are very rarely welcomed into those stories, or if we are we are not completely in control of the conversation being had. Now with the passing of SESTA/FOSTA in 2018 the policing of sex workers’ online presence is next level—from shadow banning to full on having our accounts removed. It’s a constant issue. This fear of sexuality is so bizarre because, in many ways, sex workers helped create social media as we know it today. It’s the same barriers, just now it’s happening to our bodies in a virtual sense, making us afraid of being banned from certain sites that once provided us with more safety while working.

LK: I love how the collection contains such a wide array of tones – from the melancholy to the outrightly comedic. In Aimee Herman’s poem “Kind of Like Citrus,” the speaker describes writing her grocery list and alphabetizing her record collection with “your dick inside me.” In what ways might humour be a tool for sex workers?

JD: Humour helps us do our jobs. Sex workers are some of the funniest people I know because we have to be. The amount of times I’ve had to hold an entire conversation or over compensate with personality and jokes is insane. There’s a sense of being on at all times that we are just used to. Humour is survival.

AD: There’s a lot of burn out that comes with sex work justice. Sex workers who are fighting stigma through art, legal reform (decriminalization), health and safety advocacy, community building etc. face the ongoing exhaustion. Our words get twisted and used against us. We face online and in-person aggressive criticism. And we are constantly put in the role of the educator, often educating audiences who are ignorant of our realities. But poetry does not owe anyone an education. Poetry mostly falls outside of public debate. Poetry doesn’t give two sh*ts about moral conservatism. Poetry can’t be shadowbanned. Poetry shrugs of the outsider gaze—in fact, poetry may not even know there is such a thing as the outsider gaze.