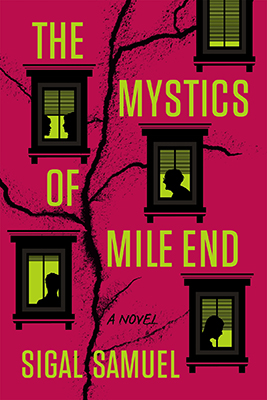 The Mystics of Mile End

The Mystics of Mile End is a smart, compelling, and, at times, magical read—a promising introduction to a young author who might one day be counted among Canada’s finest.

In the early pages of The Mystics of Mile End, the first of four narrators, eleven-year-old Lev Meyer, quotes the Talmud: “a word is worth one coin but silence is worth two.” It’s an idea that Samuel beautifully deconstructs in her stunning debut—Lev’s earnest voice alone earns the author the back-cover comparison to Nicole Krauss’s acclaimed novel The History of Love.

After the death of his mother, a “yeasty silence filled the house and rose, inch by inch, until it filled the space” between Lev, his older sister, Samara, and his father, David, a professor of Jewish mysticism who rejects his former faith. When each member of the Meyer family becomes obsessed—in their own way—with the Kabbalist concept of the Tree of Life, another tragedy threatens to tear them further apart. Mile End explores themes of faith, loss, and healing—and touches on feminism and queer identity through Samara’s storyline—but at its core this is a moving and evocative story about the ways we communicate and the ways we sometimes fail to.

It is ironic, perhaps, that a book that warns against looking for patterns and symbols would appear to be so full of them—“When you are studying [the Tree of Life], it is easy to become obsessed,” Hebrew teacher and Holocaust survivor Mr. Glassman warns Lev. “Suddenly everything you see looks like a sign from above.” As the story moves from one narrator to the next—from Lev to David to Samara to the eponymous Mile End—it is peppered with little revelations that pull the reader deeper into the story and closer to the enigmatic members of the Meyer family. Samuel is an expert at foreshadowing; while a close read of the first section arguably provides enough information to guess—but not know—the major plot points in the other three, the details serve to build the multiple mysteries. However, the care put into pulling all the threads taut arguably comes at the expense of secondary characters: the Glassmans, for example, feel more like thematic devices than people.

The Mystics of Mile End is a smart, compelling, and, at times, magical read—a promising introduction to a young author who might one day be counted among Canada’s finest.