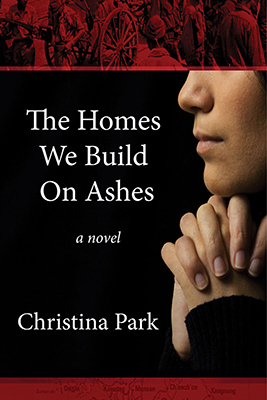 The Homes We Build on Ashes

Park explores the spiritual resilience of women in the face of colonial and domestic violence.

Christina Park’s contemplative, slow-burning debut novel The Homes We Build on Ashes reaches far—geographically, emotionally, and spiritually. Following the life of a Korean woman named Nara Lee, the novel spans from the Japanese occupation of Korea to late-twentieth century British Columbia. Growing up in colonial Korea, young Nara watches as Japanese soldiers execute her father in front of her eyes. After her mother dies of illness soon after, Nara is sent to live in a dubious orphanage. Through Nara’s difficult journey, Park explores the spiritual resilience of women in the face of colonial and domestic violence.

As Nara encounters various traumas, she constantly re-examines her faith and wrestles with a complex survivor’s guilt. Park considers the role of silence in narratives of trauma through Nara, who is haunted by her own silent witnessing of her father’s murder and her childhood friend Min-joo’s kidnapping. The novel’s centrepiece is Min-joo’s gut-wrenching account of her sexual abuse as a “comfort woman” for the Japanese army. Nara, who feels responsible for Min-joo’s fate, must grapple with the implications of remaining silent about what happened to her friend.

However, the novel at times suffers from overly simplistic generalizations. For instance, we are told that despite deplorable conditions, Nara and her fellow citizens are “able to maintain a harmonious humanity that is always at the core of Korean society.” Park also has a tendency to tell rather than show, which interrupts the narrative flow, pushing the novel into didactic territory. When Nara and her husband Jae-sun are tricked into slave labour at a Japanese factory, Park writes, “The sting of this betrayal coursed through Jae-sun’s veins like venom, and he read the callousness and depravity exactly for what it was: despotism and brutality run rampant.” Later, when Nara is beaten by a factory guard, she “see[s] the metaphor of this act in a microcosm that played out larger across her nation: she was a little morning calm beaten down by a ruthless rising sun.” Instead of giving Nara’s story room to breathe, we are often told how to interpret events.

Still, there are inspired moments in The Homes We Build on Ashes. When a young Nara loses consciousness during a military raid on her school, Park brings Nara through an evocative folk tale-infused dream about an elusive search for home. Nara’s journey eventually takes her across the Pacific, and the homes she painstakingly rebuilds for herself do not come easily. Though flawed, Park’s sensitive exploration of a traumatic history makes The Homes We Build on Ashes an admirable debut effort.