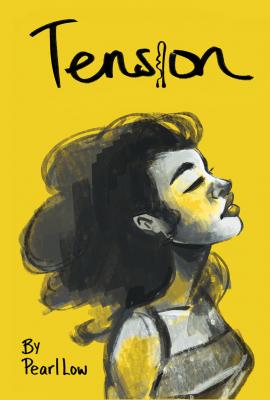 Tension, a graphic memoir by Afro-Asian artist Pearl Low, is about a woman learning to love and embrace her roots—literally. “I never used to mind my hair. . . until other people started to,” she writes in the opening strip, which depicts a younger Low who bemoans her “freakin’ frizzy” hair before pulling it into a tight bun.

As a biracial person of Jamaican and Chinese descent growing up in Vancouver’s east side, Low explores the complexities of being mixed-race in a predominantly white and Asian community that shares one thing in common: straight hair. Low feels further isolated when she realizes that even her Chinese mother, who she considers her most consistent influence, also has straight hair.

While Low’s mother encourages her to let down her curls, the support that Low finds in her private life is quickly juxtaposed with the harsh realities of the outside world. As Low points out, “hair was ‘just hair’ until society decided otherwise.” Low traces this growing tension with her own hair to a vivid ninth-grade memory, where a boy she hardly knows suggests that she should always wear it straight. It’s a seemingly harmless exchange of a few words— in his eyes, even a compliment—that has a lasting impact, fueling years of Low feeling insecure about her natural curls.

While Tension includes its fair share of endearing and even comical moments, the comic is laced with undertones of loneliness and not belonging. From the interesting, albeit unstylish, haircuts her Chinese mother tries on her as a child, to a university classmate touching her hair without permission, each stage of her life came with different challenges, and yet one thing remained the same: Low was still at war with her hair. “Thirty minutes this morning went into doing my hair. Most of that time went into convincing myself my hair looked acceptable enough,” she writes. It isn’t until Makeba, Low’s sister-in-law and a woman of colour who understands curly hair, gives her a haircut that she truly begins the process of loving her natural coils.

Low’s narrative seamlessly drifts between moments and memories, each providing a small yet impactful snippet into her journey to finding self-love and acceptance. Her artistic and illustrative style effortlessly conveys a young girl taking baby steps to regain the confidence she once had as a child who did not ruminate on the opinions of others. Tension is deeply personal, and each strip—no matter how brief or fleeting—contains a compelling story within itself. The overarching message, however, can be summarized in a few words before it even begins: “No matter the crown on your head, you’re beautiful.”

Nadia Siu Van is a writer and editor based in Toronto. Her writing has appeared in Ricepaper, Shameless, U of T Magazine, and Hyphen.