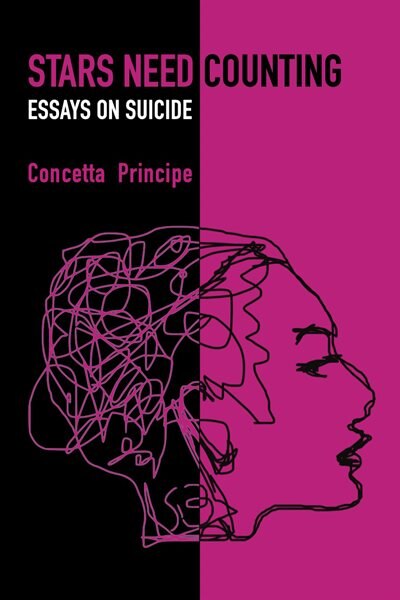 Stars Need Counting: Essays on Suicide is an important exploration of what it means to live and love in the presence of suicide. Author Concetta Principe fearlessly guides readers towards uncomfortable questions, using essays as a medium to grapple with the heartbreak of suicide. Her writing offers a safe space to contemplate life and death, sorrow, self-loathing, and carrying on despite it all, while casting no judgment on those who have chosen not to.

In the six-page preface, Principe takes great care to write that her book is not: an apology for suicide, a comprehensive review of suicide, a history of suicide, an argument for or against suicide, judgment, or a response to suicide that is without love. Though lengthy, her introductory list reveals the delicate boundaries of Principe’s work and her cautious handling of the subject, allowing readers to dip a toe in uncomfortable waters before plunging headfirst.

Each of Principe’s essays offers a thoughtful contemplation on the painful unknowns of suicide from brief case studies to longer analytical discussions. Weaving personal experience with unflinching analysis, she refuses to shy away from difficult topics like suicides by Canadian military deployed to Afghanistan, the concept of political suicide, 9/11, the image of the Falling Man, suicide cults, and medically assisted suicide, among others.

As a mother, she wrestles with the notion that mothers don’t suicide (a word intentionally denominalized here), drawing upon the lives and suicides of Sylvia Plath and Kate Spade to ponder why mothers do suicide. She describes “the shame of being a mother and feeling no love” and acknowledges: “I can get all righteous and claim that mothers don’t, but I am a mother, and I know they do.

Because mothers are human.” Her honesty is sharp and soothing—a gulp of fresh air in the rhetoric around suicide.

Out of these essays emerges Principe’s relationship with suicide. She knows “suicide talks to life,” that it “is a part of life, full of the material of life.” As she recounts moments of personal grief—as a teenager, unemployed graduate, mother, failed writer—Principe peels back layers of shame, enabling an honest conversation around suicide as a “question whose answer is impossible.” The result is a piercing confession informed by her own vulnerability, inviting readers to honestly reflect on their own condition of life and the question of death.

Despite the heavy subject matter, Principe leaves readers feeling a little more lighthearted, a little more hopeful, and a little more open to appreciate the small things that make life worth living. By writing openly and honestly about suicide, she permits our suffering and acknowledges our shame. As she writes, “the day needs managing, the meat needs cutting, stars everywhere need counting.”

Kendra Heinz is a writer, editor, and former lawyer . She is a member of Editors Canada and a volunteer with The Malahat Review.