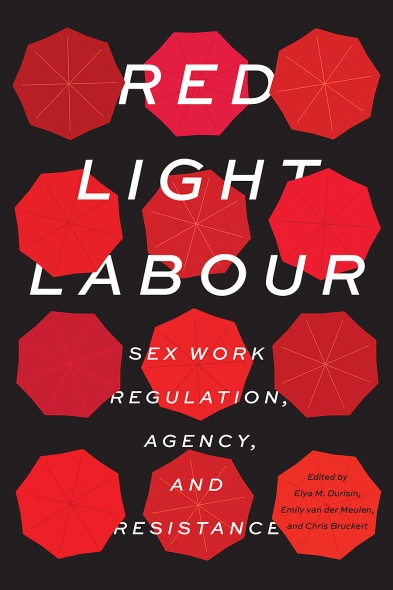 Shining a Light on the Labour of Sex Work

Red Light Labour is a groundbreaking new collection of bold, engrossing, and timely essays and personal narratives that explore sex work with the nuance, care, and rigour. Lauren Kirshner connected with the three editors of Red Light Labour, Elya M. Durisin, a researcher who holds a PhD in political science from York University, Emily van der Meulen, an associate professor of criminology at Ryerson University, and Chris Bruckert, a professor of criminology at the University of Ottawa, to discuss the history and future of sex work policy and resistance in Canada.

Sex work is a subject that is often beset by moralistic white noise, un-checked myths, and feminist quarreling. Fortunately, Red Light Labour, a groundbreaking new collection of bold, engrossing, and timely essays and personal narratives, explores sex work with the nuance, care, and rigour it deserves. Broadly, the book addresses the legal and social forces that bear on the lives of Canadian sex workers today—from criminalization to stigmatization—and highlights the collective strategies sex workers are using in their battle for decriminalization, and the right to work safely. Red Light Labour makes clear that sex workers are the true experts on their livelihoods and is a must-read for anybody wanting to understand the politics of sex work in Canada today.

The volume draws its strength from the wide-ranging knowledge and experiences of its contributors—researchers, activists, and sex workers—who have deep investments in the field and important stories to tell. With twenty-six chapters divided into three areas —law and policy, work, and resistance and activism—Red Light Labour showcases a rich assortment of research and personal stories which are united by their labour perspective. Chapters probe Canada’s historical treatment of sex workers, commercial sexual labour in various locations (street-based, indoor, rural, urban) and occupations (erotic massage, escorting, pornography), and delve into sex workers’ relationships to clients, partners, and third parties, motivations to enter, remain in, and exit the sex industry, sex work regulation, and the intersectional experiences of male and female-identified migrant, Indigenous, Black, and transgender sex workers who describe existing between multiple stigmatized identities.

In particularly compelling first-person narratives, writers describe the benefits of their work. These pieces draw attention to sex worker agency without romanticizing it. At the same time, Red Light Labour explores the challenges sex workers face including the policing of their bodies, the pervasiveness of whore stigma, the threat (and consequences) of being outed in the community, and the lack of access to criminal justice and employment protections. Together, they underscore the urgent need for stereotypes to be smashed and oppressive legal regimes dismantled so that sex workers can live and work safely, with full social inclusion. As sex worker and activist Valerie Scott—whose wise and engaging Ted Talk is a must-watch—writes in the book’s foreward: “We [as sex workers] long for the day we can be asked ‘what do you do?’ and we can say ‘sex work’ without being ridiculed or at worst, pitied.”

LK: Red Light Labour offers a rich context into Canada’s legal responses to sex work. How has Canada dealt with sex work through the last century?

EvdM: When the first Criminal Code was introduced in 1892, it included a series of laws aimed at controlling women’s sexuality and “protecting” them from so-called defilement. Women who were seen to be of “moral character” (yes, that was the language used!) should not be enticed into a “house of ill-fame”, in other words, into a brothel or bawdy-house. So, there were laws that criminalized procuring as well as owning an establishment where “defilement” might happen. There were also laws aimed at vagrants, who, according to the Criminal Code, included women who were “common prostitutes” walking alone at night and unable to “give a satisfactory account” of themselves. These provisions were modified a number of times over the next hundred years and some were eventually removed. Currently we have a system in which we criminalize the purchase of sexual services, advertising, receiving a material benefit, and communicating in certain locations, among other things. From the beginning of our criminal law history to today, we have implemented paternalistic and problematic laws that attempt to curtail what sex workers do with their bodies.

LK: Collectively, the editors of Red Light Labour have been writing about sex work for decades. How do you think the conversation about sex work has changed in the last ten years?

CB: We have moved away from explicitly moral arguments (even if morality still clearly infuses the perspectives). On the one hand, there is a great deal more recognition that sex work is work. I see this with my students all the time. Unlike ten or fifteen years ago young people today recognize bodily autonomy rights including in the context of transactional sex. Now, students quickly understand the sex-work-is-work argument. On the other hand, the widespread acceptance of third parties as exploitative and clients as predators exists uneasily alongside this recognition. So, increasingly we are seeing a position that endeavours to reconcile these two opposing viewpoints through exceptionalization. That is, framing some workers as privileged on the basis of their ability to make autonomous decisions while acknowledging the many women are not able to do so. In the end it is a patronizing and decidedly problematic compromise that inhibits our ability to see, and ultimately advocate for, all sex industry workers as constrained social actors that require “rights not rescue.”

LK: For a long time, sex workers were excluded from “mainstream” feminist conversations, which increased their marginalization and perpetuated misconceptions about sex work. What opportunities do sex workers have today to represent their stories in public discourse?

EMD: Sex workers have many more opportunities to speak openly about their experiences and policy-makers are beginning to acknowledge that sex workers must be consulted in policy and programming decisions. In Canada, the harms caused to sex workers from criminal laws surrounding prostitution have become widely recognized, particularly alongside Canada’s colonial history and the high levels of violence experienced by Indigenous women. Sex workers were highly engaged with activism on law reform leading up to and following the constitutional challenge to Canada’s prostitution laws in Bedford v Canada, as well as around the Subcommittee on Solicitation Laws in 2006 and the House of Commons consultations on human trafficking in 2018. It is of great significance that those engaged in commercial exchanges of sexual services can speak about their diverse experiences as subjects rather than objects of inquiry.

LK: Today the international sex worker rights movement is a global force, with over two hundred activist groups whose members write books, make films and art, write articles and blogs, and organize through social media. What are the common goals of these groups?

EvdM: What’s so amazing is that despite major differences in terms of socio-economics, sex sectors, types of work, geographic contexts, languages, racial and cultural backgrounds, etc., the international sex worker rights movement has unified around the fight for decriminalization, the right to health and to work in safe conditions, the freedom to migrate and freedom from police abuse, social inclusion and access to justice. Valerie Scott, one of the plaintiffs in Bedford v Canada and a long-time sex work activist, talks about some of this in the book’s foreword. We also have an entire section of the book devoted to sex workers’ resistance strategies, with chapter authors writing about the ways that sex workers have—with varying levels of success—built bridges and formed alliances with a range of other social justice movements, from feminism and labour, to queer and trans rights, to migrant justice and anti-racism.

LK: What are the ongoing barriers to the sex worker rights movement achieving their goals?

EvdM: Unfortunately, the sex worker rights movement is facing many barriers. I think the most significant is the lack of recognition that sex work is a form of work. When politicians, prohibitionists, and others don’t understand this, and instead form morally-laden assumptions, we see bad laws and policies being developed. Sex workers have long argued, and empirical research has affirmed, that our current criminal justice framework which prohibits the purchase of sexual services and other activities is harmful to sex workers, and certainly doesn’t respect their labour rights. When sex work is seen as a form of work, like it is in New Zealand, it’s possible to establish things like unions, professional associations, and occupational health and safety standards. The criminalization of sex work and the lack of labour rights are two enormous barriers.

LK: The main source for people’s knowledge about sex work is popular culture, which has historically tended to construct sex workers along binary lines (i.e. the venal femme fatale or the fallen woman). How do writers in Red Light Labour challenge stereotypes?

EMD: I think there are many misconceptions about the work of sex work and most of how “we” conceptualize sex work has little to do with the actual work, but rather of judgements about women’s sexuality and morality. Part of this is due to a general lack of understanding of what sexual labour is and a tendency to bracket-off intimacy and economics from one another. While not diminishing the realities of sex workers’ experiences of violence and other injustices, the victimization paradigm has been very politically useful for advancing certain governance feminist projects, the criminalization of the purchase of sex being one example. Experiences of sex work are much less stable that we generally think, and there isn’t any way to capture all the iterations of commercial sexual exchanges. RLL has attempted to destabilize the dominant understandings, and I hope this will open space for different discussions to take place among readers.

LK: How can folks (who are not involved in sex work) become allies to sex workers in the rights movement?

CB: An ally needs to take direction from sex workers and the sex worker rights movement. It seems rather self-evident that an ally’s language, arguments, and framing need to be informed by sex workers’ knowledge. This is easy to say and sometimes hard to do. It means checking preconceptions, unlearning the whorephobic assumptions that permeate the social world, and speaking out against bias and stigma. Accepting, really accepting, that sex workers are the experts of their own lives means an ally’s role is to make, rather than the take, space.

EMD: Most people are unaware that there is a long and rich history of sex worker activism and organizing transnationally, and even fewer are aware of the strength of sex worker organizations in Asia and Africa. To be a good ally to sex workers, it’s important to have insight into of your own ideas surrounding commercial sexual labour and sexuality overall. From there, it’s also important for allies to learn from sex worker-led organizations about alternative understandings of sex work as well as the policy positions that sex workers’ support. Fundamentally, to be a good ally, one needs to listen to the voices of current sex workers and trust the validity of their knowledge.