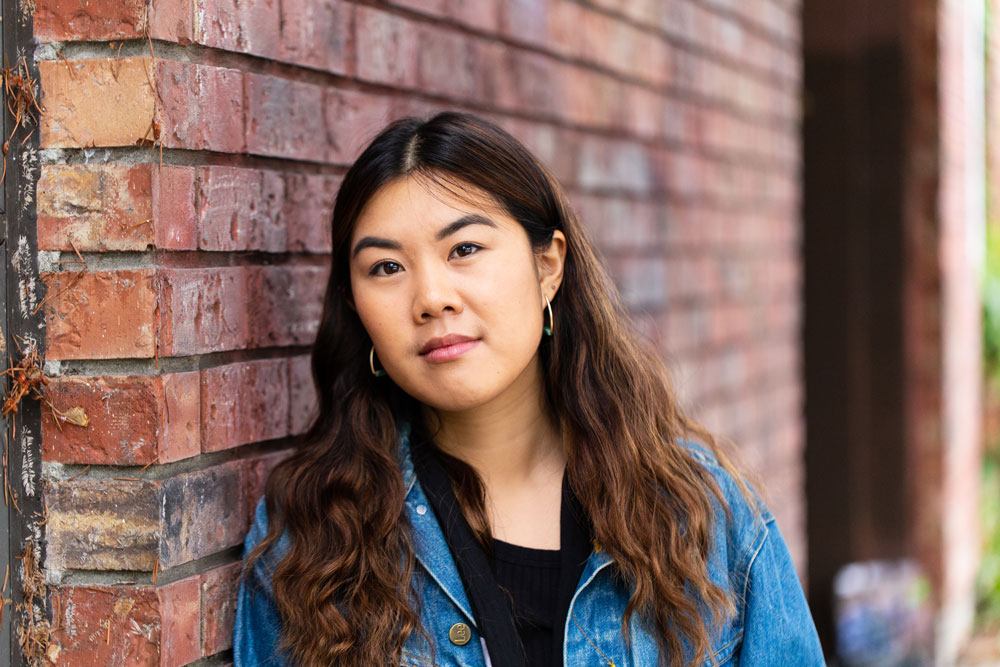 erica hiroko isomura is a writer and multi-disciplinary artist living on unceded xʷməθkʷəy̓əm, Sḵwx̱wú7mesh & səlilwətaɬ territories. In 2019, erica hiroko won Briarpatch Magazine’s Writing in the Margins Contest for creative non-fiction. Her work has appeared in Canadian publications, emerge 18 anthology, a variety of zines, and on the internet. In the year of the metal ox, erica hiroko will be working on a collection of essays. Find more of their diary comics at @ericahiroko and forthcoming graphic work with Remember Resist Redraw, a radical history project led by the Graphic History Collective.

The Emerging Writer Award is open to anyone published in a given year in Room, who has not already had a book published. The award comes with a cash prize of $500.

erica’s creative non-fiction “Pink + Green” appeared in Room’s “Devour” issue 43.2. Room’s Tamara Jong spoke to erica about her use of craft with “Pink + Green,” the meaning of names, and how she began drawing diary comics at the beginning of the pandemic.

This interview was conducted over email by Tamara Jong.

ROOM: Your CNF piece “Pink + Green” in Room’s 43. 2 issue “Devour” is a hauntingly beautiful look at grief. The image description of the summer an Orca mother went on a “tour of grief” in the news is unforgettable. Some erasure happens in the piece where we are left to imagine what grief looks like, and at the same time, we cannot see the words. Can you talk about how you crafted this wonderful work of prose?

erica hiroko isomura: Thanks for those kind words, Tamara. I started writing pieces of what would become “Pink + Green” while I was staying at my friends’ apartment and going through a breakup. Pink and green are my friend’s favourite colours, so their studio was decorated in that colour scheme and it kept making me think of salmon. Initially, the writing was a way for me to process my feelings, but it began jumping to other memories and ideas—a fishing trip, being a descendant of fishers and cannery workers, the cultural significance of salmon—and I eventually decided to develop the writing into a piece of creative non-fiction.

Salmon is considered a staple in the Japanese Canadian community and the fishing industry is one reason why the community settled on the west coast of Canada. Of course, this completely changed during the war years when the community was forcibly interned and all property, including fishing boats, was taken away by the government. I feel compelled to write about my Japanese Canadian family’s experience of displacement, but I’m well aware that this experience doesn’t exist in a vacuum. Wild salmon has been important to coastal Indigenous communities since time immemorial and is vital to the wellbeing of the local orca population (s/o to the original J pod!). The relationships between these ideas are complex, whether immigrant/diaspora/settler-colonizer, human/animal/orca, or love/loss/grief.

As I worked on the writing, there were fragments of the story that felt too personal to include. I was still experiencing the grief. I could also remember, quite literally, being unable to speak some of these words out loud without crying. I came up with the idea of embedding an internal poem throughout the piece to say some of the harder stuff and then removing those words to see the effect on the page. It left these ghostly blank spaces among the lines of prose.

Excerpt from “Pink + Green” (Side A) with text removed

In an earlier draft, certain words are blanked out, making full sentences illegible. The missing words became a shadow narrative. By the time I submitted the piece for publication, I had decided to include the ghost poem and split “Pink + Green” into two parts, a “Side A” and “Side B.”

Excerpt from “Pink + Green” (Side B) with erasure poem technique

In the published version of “Pink + Green” in Room, Side A’s blanked out words appear to be redacted and Side B appears as an erasure poem.

The title “Pink + Green” was inspired by Frank Ocean’s song “Pink + White” off of his album Blonde, which I reference in the piece.

ROOM: “For the Dreamers” won the Briarpatch Magazine’s contest Writing in The Margins in the creative non-fiction category judged by Alicia Elliot. There are several places for a pause in this piece. The affirmation for queer people of colour, “I come from the dreams of my ancestors.” There’s the description of your great grandparents’ registration cards issued during the Second World War, and about building your sculpture ‘registry’ out of the hundreds of replicated cards and saying your ancestor’s names aloud so you do not forget.

What was it like to hold these cards in your hands, and say the names of your ancestors aloud?

EHI: Names can be powerful and telling. More than one of my family surnames relate to land and place. For example, my dad’s family name translates to something akin to “village by the ocean” in Japanese and my mom’s family name 雷 means “thunder” in Chinese—the character literally depicts the radical for “rain” above “rice paddy” or “field.” It offers me comfort to take refuge in names because it’s part of the story of where I come from.

I had a personal revelation when I first learned my great-grandparents’ names through those registration cards. Up until that point, I’d been frustrated with how little information I could access about my late obaachan’s life. I couldn’t find evidence of her family at the Tashme internment camp, which is where my dad told me she had lived. I’d previously visited the former internment site near Hope, BC (now an RV Park) and came across a map that listed who lived there, but my family’s name wasn’t included.

The registration cards revealed that my obaachan (my dad’s mom) and her siblings had taken my great-grandmother’s surname, which I was unaware of. I figured out that my family’s internment experience at Tashme was documented under my great-grandfather’s surname, which speaks to heteropatriarchal assumptions about family. From a record linked to this surname, I recently learned that my great-grandfather immigrated from a completely different part of Japan than I’d previously been led to believe, the opposite side of the main island.

I’ve had to put in work to learn my history and there’s still a lot I don’t know about “where I come from,” which makes that question all the more irritating. It’s so complicated. Sometimes my life feels like a constant series of identity crises, yet a name can be a tether.

ROOM: At the beginning of quarantine, you began drawing a #dailyquarantinecomic series and put up poetry installations in your living room window. Many of us have turned to different forms of creativity. I rediscovered drawing again. Had you ever created anything like this before?

EHI: Yay for the re-discovery of drawing! My diary comics became a creative output I turned to when my brain couldn’t seem to produce any new writing. I would email new comics to my friends each week and it seemed like a way we could talk about these surreal experiences during the pandemic as it unfolded. I’ve been doodling and drawing in my journal for the past ten years, but I haven’t shared much of it until recently. Thanks for inviting me to submit one of my recent comics with this interview. ☺ 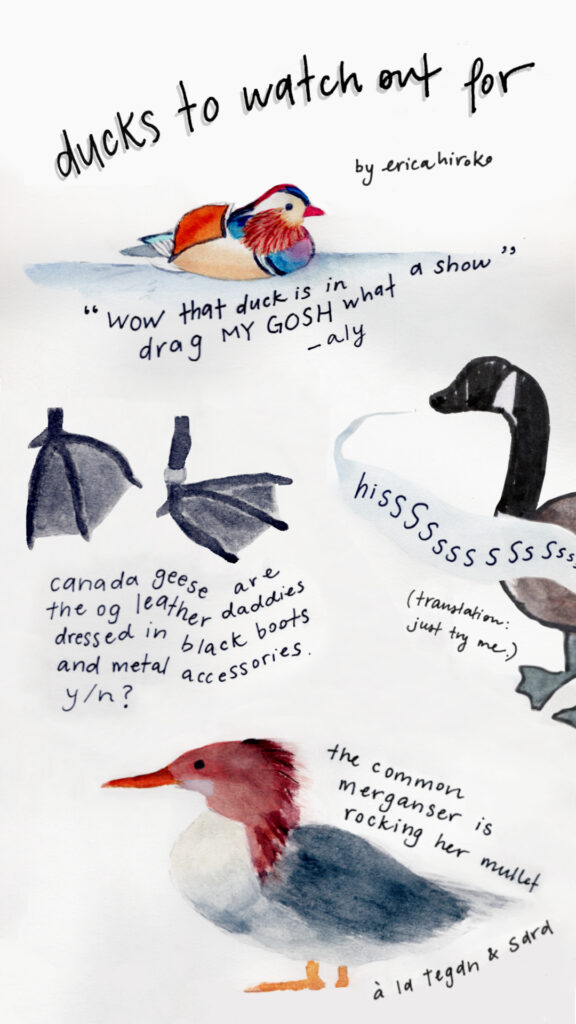 “ducks to watch out for” by erica hiroko (ink and watercolour, 2021) from #dailyquarantinecomic, a diary comic series.

ROOM: Mentors play such an important part in the community for emerging writers and artists. I appreciated reading about your experience with mentor Hiromi Goto in various pieces and interviews. In your recent Room essay, you wrote about one of the things that surprised you about your mentor was learning about pacing, and how she maintains balance in her career, writing, and life. This is so important as a creative person and hard to do.

What do you think is important to look for in a mentor and what’s your advice about how to make this relationship work successfully?

EHI: I’m really grateful for my learning with Hiromi. I think it’s important to find a mentor who wants to set goals with you (not for you), feels excited about the work you’re doing together, and wants to learn by your side. I think the learning goes both ways and a mentorship works best when it’s a collaborative, give-and-take relationship.

In schools and institutions, there’s often an approach that teachers hold the knowledge and students act as empty vessels to receive it, in a top-down, linear way. However, I think the more that mentors and mentees can strive to learn from each other and challenge hierarchies of knowledge, the more successful the relationship can be.

ROOM: As a multi-disciplinary artist and writer, how do you exercise self-care and replenish your creativity?

EHI: Lately I’ve been trying to go for walks, stretch my body, and eat yummy meals. Sometimes simple acts of self-care can be hard to do, especially when pandemic time can be amorphous and it becomes easier to binge Netflix and eat mini eggs in bed. I wouldn’t consider myself to be the most self-disciplined person, but I usually feel better after doing something that reconnects me to my body. I’ve also been learning how to identify birds, which is fun and inspires creativity, for sure. So many colours, shapes, and patterns!

ROOM: What are you reading right now?

EHI: Right now, I’m reading The Terrible by Yrsa Daley-Ward and The God of Small Things by Arundhati Roy. I recently finished reading How Not To Spill by Jessica Johns, nîtisânak by Jas M. Morgan, and a chapbook by my friend K. Ho called Anatomy of Smoke, which were all stunning.

ROOM: Congratulations on winning Room’s 2021 Emerging Writer Award! It’s been wonderful getting to know more about you and your work.

EHI: Thank you so much. It’s really encouraging to find out that people believe in me and believe in my work.

Tamara Jong (she/her) is a Montréal (Tiohtià:ke) born mixed-race writer and cartoonist of Chinese and European ancestry. She is a graduate of The Writer’s Studio (Simon Fraser University), and currently enrolled in the SAW comic certificate program. She currently lives and works on Treaty 3 territory, the occupied and ancestral lands of the Haudenosaunee, Anishinabewaki, Attiwonderonk, and Mississaugas of the Credit First Nation (Guelph, ON).