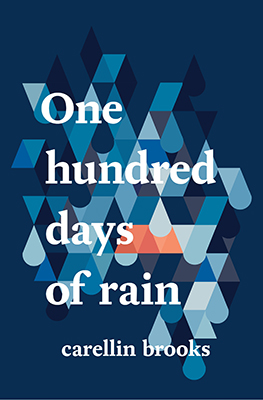 One Hundred Days of Rain

We enter the narrative after the fight, after the authorities are called, after the unnamed protagonist leaves and the rain has started. “She has always liked that,” drums the narrator in a tone which persists as poetically matter-of-fact, at times as bleak as the weather, “Rain you can ignore, until it resolves itself into something else.” And the rain continues in its various incarnations across one hundred small and neatly crafted chapters.

As our heroine trudges her way out of another broken relationship and navigates with dogged determination the sodden streets of Vancouver, Carellin Brooks’s debut novel, One Hundred Days of Rain, tracks the sad and cautious movements that take us away from someone, and the ways we cling to and make sense of that which we take with us—in this case, a weathered bike in need of constant repair; her pearls and a sober pair of carefully-oiled boots; a set of her grandmother’s china which falls piece-by-piece out of angry, slippery fingers; and the memories of their story together that rise up in moments sharp and unbidden. And, over the course of the novel her relationship with rain, much like her relationship with her own story, does indeed resolve itself into something else.

This is not a Lear-esque explosive, cumulative torrent of emotion, delivering its protagonist broken and howling amidst the elements. Rather, Brooks engages with pathetic fallacy in a way that is long, rich, neat, and nuanced, delicately fleshing out the relationship between our internal landscape and the external world through this “loudest of weathers,” that at once holds the potential to heal and in turn wound. “Despite how reliably it appears each day, the rain is never the same,” she muses through wet panes. “Surely there cannot be this many separate sorts of rain. But, as it turns out, there are.” The result is that rain, which “totters about with a skim-milk wrist held to its forehead,” which “murmurs quietly to itself,” which at times she insists, “coldly furious . . . has ruined her,” is as much a protagonist as is the woman who learns to endure amidst the guilt of “not being able to endure.”

As such, each exists on the pages of this perpetually damp world in direct challenge of the other, at times determined to avoid, at others to manoeuvre, and at their most willful, to barrel through. As the memories and the water trickle in, of fights, of promises, of dryer, less-satisfying landscapes, she learns to soften, to heal, and to read the impermanence of the rain’s shifting narrative as a reflection of her self. The narrator’s solemn turn to the reader, asking, “Now will you believe in weather?”, poses the question at the centre of a text which forecasts that our navigation of the world at large ultimately depends on how we weather our own.