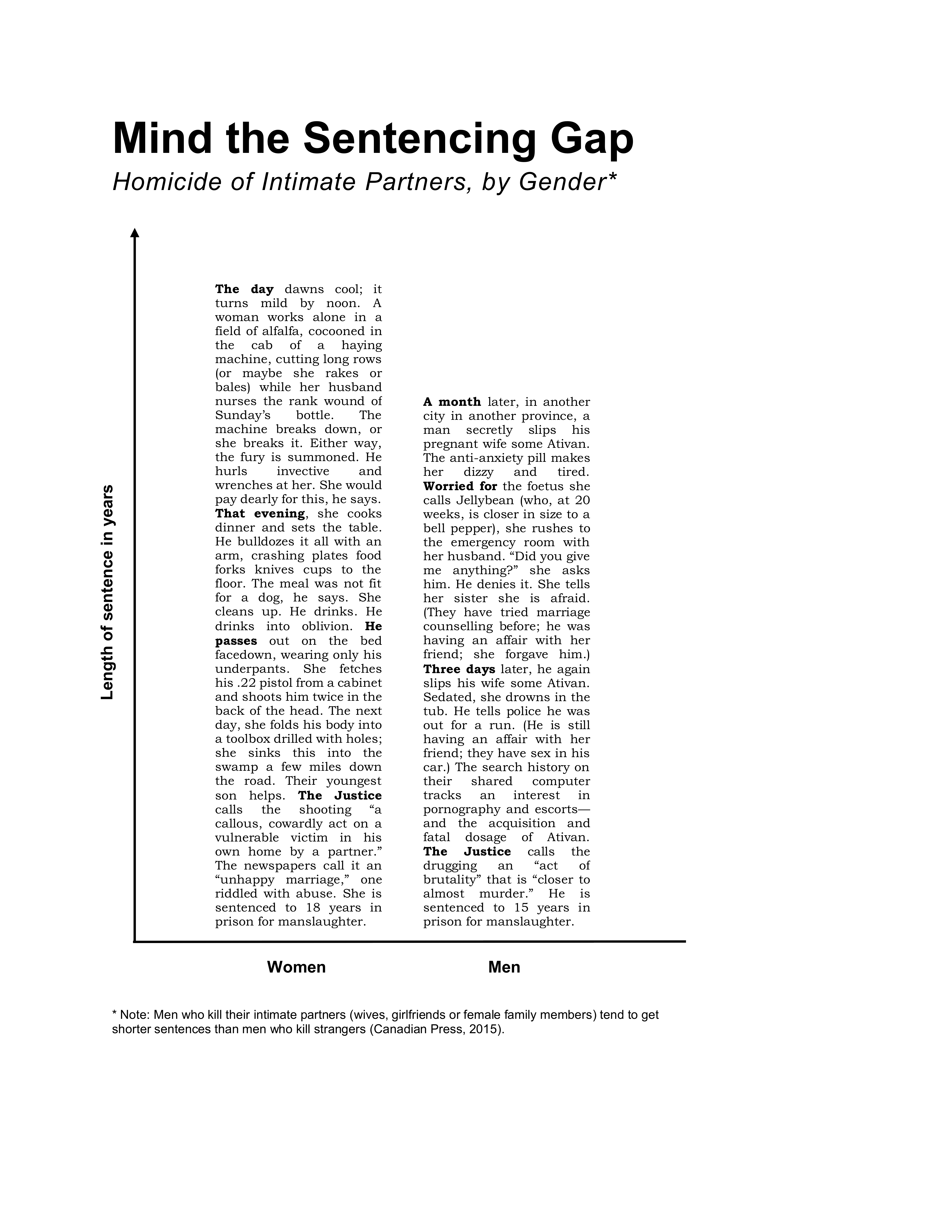 Mind the Sentencing Gap is the honourable mention for the 2020 Short Forms Contest, selected by Judge Lisa Bird-Wilson. It is meant to be read in the graph it is presented in above; the text version of the piece is below.

That evening, she cooks dinner and sets the table. He bulldozes it all with an arm, crashing plates food forks knives cups to the floor. The meal was not fit for a dog, he says. She cleans up. He drinks. He drinks into oblivion.

He passes out on the bed facedown, wearing only his underpants. She fetches his .22 pistol from a cabinet and shoots him twice in the back of the head. The next day, she folds his body into a toolbox drilled with holes; she sinks this into the swamp a few miles down the road. Their youngest son helps.

The Justice calls the shooting “a callous, cowardly act on a vulnerable victim in his own home by a partner.” The newspapers call it an “unhappy marriage,” one riddled with abuse. She is sentenced to 18 years in prison for manslaughter.

Worried for the foetus she calls Jellybean (who, at 20 weeks, is closer in size to a bell pepper), she rushes to the emergency room with her husband. “Did you give me anything?” she asks him. He denies it. She tells her sister she is afraid. (They have tried marriage counselling before; he was having an affair with her friend; she forgave him.)

Three days later, he again slips his wife some Ativan. Sedated, she drowns in the tub. He tells police he was out for a run. (He is still having an affair with her friend; they have sex in his car.) The search history on their shared computer tracks an interest in pornography and escorts—and the acquisition and fatal dosage of Ativan.

The Justice calls the drugging an “act of brutality” that is “closer to almost murder.” He is sentenced to 15 years in prison for manslaughter.

Here’s what Judge Lisa Bird-Wilson had to say about Erin Klingmann’s piece:

“Cleverly depicted as a graph, “Mind the Sentencing Gap” is somewhat reminiscent of concrete or visual poetry. But at its heart the piece is prose—inventive, political, and pressing—demanding our attention to the truths of intimate partner violence.” – Lisa Bird-Wilson 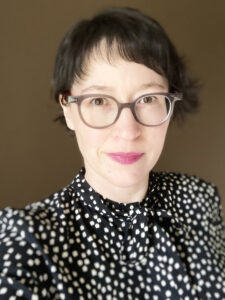 Erin Klingmann is an emerging writer and creative nonfiction student in the 2021 Writer’s Studio at Simon Fraser University. She lives in Victoria, B.C., where she works for the Province as an information designer and plain language specialist. She was born in Smithers in 1976 and raised in Vancouver.