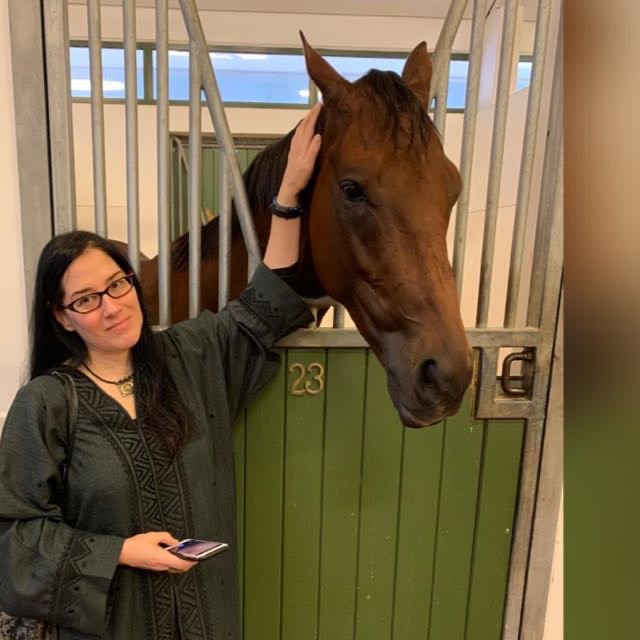 “Meeting Jibreel” is the honourable mention for Room’s Poetry Contest 2020, as selected by judge Canisia Lubrin.

In my Quranic primer of short, & long, verses
I scrawled in the margins with metallic ink.
I learned the name of an angel, as my body
Shaped a conduit from aya to hand to pen.
I grounded pre-teen words like “cool” & “ok”
While the class chanted the story of visitation
Beneath a palm tree. A woman name Maryam
& the winged Malak whose message
Must have knocked her into his feathered arms
Without doubt or hesitation because Jibreel
Was the messenger & the body of a man together.
I understood as the fusha Arabic fell from
The tongues of all of us, dozens of girls in white.
My eyes semi-closed as palm fronds breathed
& desert sand cooled hot limbs—
Transported by our harmonics—
When the bell rang & our door opened
To the world, light descended as
Fully fledged wings & entered us.

Here’s what judge Canisia Lubrin had to say about Majda Gama’s Meeting Jibreel: “Until its last mystifying line where the whole is brought into astonishment, the poem makes a counter-knowing of itself. Such astute balance is its quietly observed ways of loosening the body from its ego. And what lets this shifting trick the mind into letting logic slip past the speaker’s off-kilter way of seeing? That thing makes the poem sing. That’s the thing about the poem’s impressive tranquility.“

Majda Gama is a Beirut-born, Saudi-American poet based in the Washington DC area. Her poetry has appeared in Beloit Poetry Journal, Cordite, Nimrod, The Normal School, and Wildness. Majda is a Pushcart nominee, an honourable mention in the 2020 RHINO Founder’s Prize, and a 2020 New Issues Poetry Prize finalist.