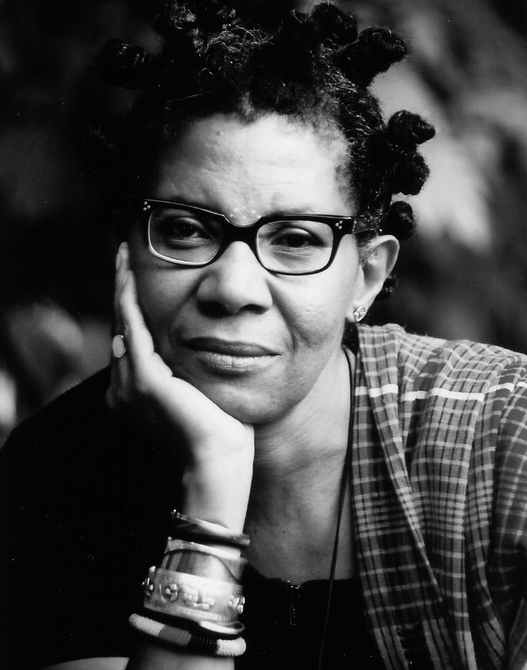 M. NourbeSe Philip on Genre, Performance, and Putting the Ego Out

Room’s Taryn Hubbard talks to M. NourbeSe Philip (featured author in Issue 38.4 “Fieldwork”) about the range of her writing genres, her writing performances, and gets her advice for new writers.

Born in Tobago, M. NourbeSe Philip, is a poet, fiction writer, and essayist based in Toronto. With degrees from the University of the West Indies and the University of Western Ontario, Philip was a lawyer for seven years until she left her practice to focus on writing. She has won numerous awards and fellowships for her work, including a Guggenheim Fellow in poetry and a McDowell Fellow.

Her most recent book of poetry Zong!, published by Wesleyan University Press, and by The Mercury Press in Canada, is a book-length poem based on the legal decision (Gregson vs Gilbert) at the end of the eighteenth century about the murder of Africans on board a slave ship. Told in fragmented and innovative style, Philip pushes the boundaries of poetic form to tell the chilling history of a captain’s order on the slave ship Zong to murder around 150 Africans by drowning so the ship’s owners could collect insurance money. In 38.4 (out Winter 2015/2016), Room will publish her creative non-fiction piece called “Drowning Not Waving.”

You have written poetry, fiction, drama, essays, and more. When you start new writing, what informs the genre you choose?

The work or idea itself chooses the genre. For instance, before I began writing the play, Coups and Calypsos, I knew it could not only be on the page. Several years ago, during a summer visit to Tobago, a coup occurred in the sister island, Trinidad, two days after arrival of me and my family. For a couple of weeks we lived under curfew and my only source of information was the radio—actually three radios, one of which was shortwave—and I knew that when I came to write something about the events, it would have to be oral and aural, hence the play.

For 38.4, you are sharing a creative non-fiction piece. Can you tell us a bit about it?

In your book Zong!, you draw from an archive text. What do archives mean to you?

Last question, what are you reading right now? Do you have any all-time favourite books?

I am reading a work on oriki (I Could Speak Until Tomorrow by Karin Barber), which are akin to praise songs and is a Yoruba based oral practice from Nigeria. I’m also reading a work on the history of Islam by Karen Armstrong—I feel it’s important to understand the history of this religion that has had and continues to have such an impact on the world. I read detective fiction as a form of relaxation and I recently discovered a work in this genre set in Zagreb just before the long and protracted dissolution of Yugoslavia.

I can’t pick an all-time favourite work—I have many. Any and all work by the poet St. John Perse as well as Audre Lorde’s poetry. The Trinbagonian poet, Eric Roach’s poetry is also central to my reading and writing life.

Taryn Hubbard is a Room collective member and the editor of Room 38.4, Fieldwork (out Winter 2015/16), which features M. NourbeSe Philip’s commissioned piece “Drowning Not Waving.”

Subscribe by December 10th, 2015 to begin your subscription with this issue. You will also receive a second subscription FREE to give away to a person or organization of your choice. The link for this promotion is: http://www.roommagazine.com/subscribe/bonusbydec10