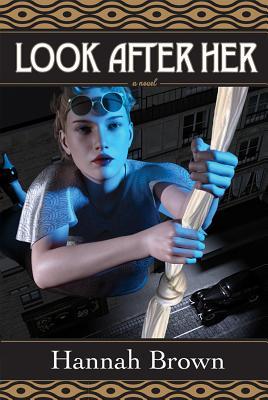 Packed with action and intrigue, and impeccably paced, Hannah Brown’s debut novel Look After Her is a gripping, accomplished piece of feminist historical fiction that provides insight into the depths of our connections and the limitations on knowing one another, even in the most intimate of relationships. The novel tells the story of Hedy and Susannah, two teenage sisters living in early twentieth-century Vienna. Shortly after the death of their parents, the sisters are kidnapped and held captive in a brothel. The pair eventually manage to escape, and the novel follows the young women over the subsequent years as they cross Europe, separating only to come together again, finding themselves along the way in milieus both luxurious and perilous.
As a piece of historical fiction, the novel bears the marks of thorough research without overwhelming the reader with detail and explanation. Brown’s prose is consistently fluid, and the novel’s various settings—Austria, Italy, and England between the two World Wars—are well conveyed, making for an engrossing reading experience. Soon after their escape from the brothel, Hedy and Susannah find themselves practicing psychodrama, a version of group psychotherapy founded by the Romanian psychiatrist Jacob Moreno, who is summed up by Hedy in a passage marked by the author’s subtle, dry humour and attention to detail:

But therapy had moved to the suburbs as Moreno had taken a bride and his practice to Bad Voslau. I missed the focus on physical movement and talking companionably afterwards with the others. I saw a photo of him in the newspaper. He was sitting in front of a wall covered in ivy. A good suit, but the trousers needed lengthening. You could see the top of his boots.

The story moves along at a steady clip, creating an effect that is almost cinematic (Brown is also a screenwriter), bringing to mind the enthralling, woman-centred historical fiction of the American writer Amy Bloom, author of Away and White Houses. While I found myself quickly adjusting to the plot and the novel’s narrative voice, I was caught unaware by a well-crafted twist in the story. Without going into detail, I will say this: Look After Her’s unexpected turn triggers a renewed interest in Hedy and Susannah’s sororal relationship, complicating the reader’s initial impression of the two. The elegance of the ensuing plot and character development bears the mark of an exceptionally talented prose writer and world builder. I look forward to reading more from Brown, who in her debut has already accomplished something remarkable, revisiting at once a familiar setting (early twentieth-century Europe) and a familiar plot point (the treasured yet fraught relationship between two siblings), while crafting something entirely her own.

Annick MacAskill’s poetry has appeared in journals and anthologies across Canada and abroad. Her debut, No Meeting Without Body (Gaspereau Press, 2018), was nominated for the Gerald Lampert Memorial Award and shortlisted for the J.M. Abraham Award. Her second collection will appear with Gaspereau in 2020. She lives in Halifax.