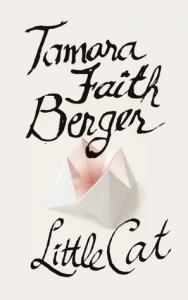 Following the success of Maidenhead, which won The Believer Book Award in 2012, was short-listed for the Trillium Book Award in 2013, and was the most reviewed book of 2012 according to the Canadian Women in the Literary Arts Count, Coach House Books has released revised versions of Berger’s two earlier novels, Lie With Me (1999) and The Way of the Whore (2001), in a single volume titled Little Cat.

Lie With Me opens with a young woman’s unapologetic acknowledgment of desire and how her needs don’t fit the narrative assigned to her. When men experience sexual pleasure, she feels it’s localized, but for women, she finds it easier to become disconnected from the sensation; she says that a woman “can get lost trying to know herself” (p.8). Then later on the same page she continues with this same line of thought: “[b]eing a slut kind of implies getting lost, going astray.” In this rambling confession, she desperately seeks affirmation or at least acknowledgement that her desire, her want, is as valid as a man’s, yet remains afraid of the label, slut, and what it might imply.

The unnamed woman regularly goes to a bar, gets drunk, and picks up strange men. They’re usually surprised at her aggressive sexuality, that a woman would want this as much, or even more, than they would. She takes them back to her apartment, nondescript beyond the filth and stench of it, which worsen as the novel progresses. The results are graphic and hardcore, first told from her perspective, then from a rotating circle of men. These numbered  but otherwise anonymous men take over the narrative, though guided by the young woman, as she explores her desire, learns control, and how to express her wants. There is no clear narrative or plot—the story progresses in pornographic scenes, and what we’re left with doesn’t quite add up to a whole.

The Way of the Whore is centred on Mira, a young Jewish woman, and her introductions to sex—as a child with her cousin and other boys, as a fifteen year old seduced by an older man, the appeal of sex work, her seduction of an older stripper, and a man far more dangerous than any she’s ever known. Mira reflects back what men want to see: Ezrah, sexual exploration within the confines of middle class values; John, seducing an underage virgin, telling her what he wants her to want; Gio, with his religious allegories, viewing her as the Whore of Babylon with a redeeming purity; and the countless nameless and faceless men she transacts with. She’s present with each of these, but in a clearly secondary role. In seducing her stripping mentor, Adi, she enters a position of dominance, which Mira associates with the male role—she feels “like a man.”

Both these novellas are extremely hot and challenging to read. Not just for their graphic sex scenes, but for the raw needs of these young women, both physically and emotionally. They maintain a complex relationship with shame and social (especially male) expectation and desire.