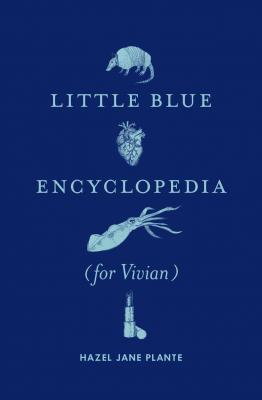 It is the simplest sentences that devastate in the debut novel from Hazel Jane Plante. “Vivian was my favourite person,” the narrator writes about her best friend, unrequited lover, and fellow femme trans conspirator in the wake of her sudden passing. It’s more a whisper than a declaration, and we understand that this book is more than anything, for Vivian.
On the surface, Little Blue Encyclopedia (for Vivian) poses as an encyclopedia of characters and places from an obscure TV show that Vivian loved called Little Blue. At other times, it reads like autofiction, documenting the narrator’s gender transition and private thoughts. These narratives fundamentally triangulate into a third story about beauty, love, and the grieving motions one goes through in the face of an absurd loss.
The novel, as a meditation on reading and writing practice, diffracts—the optical term that describes the slight bending of light around an object—grief. Like the mourning narratives of Sigrid Nunez’s The  Friend or Julian Barnes’s Levels of Life, Little  Blue Encyclopedia addresses the loss of a lover like a psychoanalysis, spiralling inwards and downwards to peel back layers of her relationship to Vivian. We follow the unnamed narrator as she advances through the stages of grief and makes progress on encyclopedic entries from A to Z. We understand that the impulse to document is a form of self-soothing when she works on the next entry or faithfully accounts for Vivian’s belongings in between writing: “Some furniture; a sewing machine. A wardrobe that included several pieces she had hand tailored. A beloved bicycle, an ancient laptop.”
There is a metanarrative here, for just as the narrator wishes to remember Vivian not in how she died, but by the things she loved (Little Blue) and the way she lived (Vivian slyly tells her during a long night of sharing insecurities that her perfume is called ’De ant Beauty’), Plante, rather than making a spectacle of queer and trans pain, makes the brutal tender. The question of how Vivian died is never asked, though the narrator acknowledges that we may ask. That Plante refuses to dwell on the how is one of the principle gifts of Little Blue Encyclopedia. Seated at Vivian’s computer one day, the narrator reflects that “somehow Viv had done it . . . to turn pain into beauty.” With her debut novel, Plante has accomplished something of the same.

Yu-Sen Zhou is a writer and scholar pursuing an MA in English and Comparative Literature at Columbia University. She divides her time between Toronto and New York.