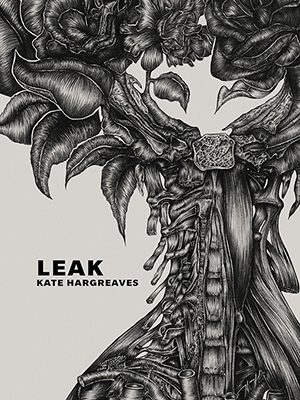 Each word in Leak, Kate Hargreaves’s debut collection of poetry, is deliberate, carefully chosen to test the boundaries of the English language. In Leak, nouns become verbs, verbs become nouns, words shift meaning, and prose flows loosely, free of punctuation. These aren’t the mistakes of a sloppy writer or a novice editor. Rather, they are part of Hargreaves’s careful exploration of the relationship between language and the body.

Unlike the bodies plastered on billboards and in fashion magazines, the bodies in Leak’s poetry and prose have been damaged by common plagues. They’re bruised, stitched, pinched, and punctured. They leak. They bleed. They scab. As the bodies in Leak falter, both mentally and physically, so does Hargreaves’s use of conventional grammar.

It’s no surprise that Hargreaves is drawn to broken bodies. Her first book, Talking Derby: Stories from a Life on Eight Wheels (2012) was inspired by her experiences as a roller derby skater. In Leak, her poem “Self-Portrait with Bruises” follows suit. “Some women marry roller skates / soles fuse to plates and wheels  / slip of the tailbone / scrape wrist / trip toe,” she writes.

The speakers in Leak are ambiguous. It’s never clear if the narrator is one person, or multiple. However, Hargreaves writes about body parts as though they are characters, autonomous in action and unique in thought.

“Her belly demands discipline. Her belly lacks willpower. Her belly laughs annoy the people two rows behind at Pineapple Express,” she writes in “100% All-Natural Organic Blend,” a piece of prose in “Heap,” the first section in Leak. Each of the book’s six sections is given a pliable title: “Heap,” “Chew,” “Skim,” “Pore,” “Chip,” “Peel.”

Leak is a sensory and tactile gem. Readers can’t help but feel “wet hair under a terrycloth hood” and “mattress damp and chunky with rotting tomato and banana leak” because of Hargreaves’s gift for description. The collection is best read aloud, the tongue tripping over Hargreaves’s delightful lyrical trickery. With each play on words, her love of language is evident, right down to each descriptive stanza.