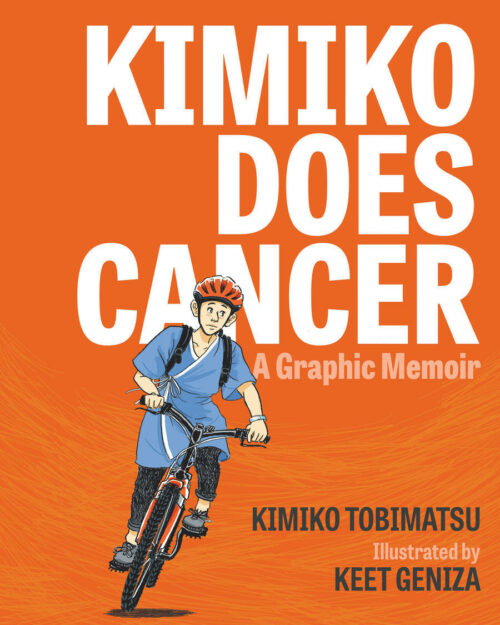 “One sec, I just noticed some sort of lump on my chest,” writes Kimiko Tobimatsu in the first frame of her bold debut graphic memoir, Kimiko Does Cancer, which chronicles the author’s personal experience with breast cancer as a queer, mixed- race woman. The illustrations by Keet Geniza, who uses a monochromatic colour palette of muted blacks and greys, keeps the focus on the mood, expressions, and body language that bring Tobimatsu’s story to life in each vignette. Kimiko Does Cancer is about seeking connection within the cancer community while confronting issues that do not fit into the mainstream cancer narrative.

In the same spirit as the opening page, the book wastes no time diving into Tobimatsu’s diagnosis, treatment, and the aftermath, allowing the reader to get some glimpse into Tobimatsu’s whirlwind of emotions after being diagnosed at the young age of 25. In a matter of days, the diagnosis forced Tobimatsu to make long-term decisions about her fertility, while doctors gave her heteronormative advice on sexual health and appearance. As Tobimatsu puts it, she moved through her first year in “a state of distraction and avoidance,” a sentiment that is mirrored through relatable vignettes of inner dialogue and thoughts throughout various stages of her cancer experience.

Despite being in a state of avoidance, the cancer reminders were never too far away, as Tobimatsu lived close to where she was diagnosed and treated; Toronto residents will recognize Geniza’s drawings of the hospital district in the city’s downtown core, plastered with messaging around finding a cure, which Tobimatsu critiques. “There wasn’t much talk of prevention or the role that gender and race play in diagnosis and treatment. The funding also seemed disproportionate to other equally important causes. Getting cancer didn’t change my opinion,” Tobimatsu writes.

Refreshingly, Tobimatsu’s story does not end at successful treatment, but starts with it. Post-cancer did not “enlighten” Tobimatsu in the way she thought it was supposed to, but instead opened the door to a host of lasting physical, emotional, and psychological changes—from uncomfortable hot flashes and dating while in menopause to feeling disconnected from her friends and navigating conversations about her experience with new people.

While many people in their twenties grapple with romance, friendships, body image, identity, and queerness, cancer added a layer of complexity that reframed Tobimatsu’s experience of all these things. And while you won’t find her donning a pink ribbon or running for the cure, what you will find is an insightful exploration of what shapes our understanding of the disease, as well as an honest view into how cancer changed one person’s way of relating to people and processing emotions. As Tobimatsu simply puts it, “It’s progress, I guess. Uncomfortable progress”.

Nadia Siu Van is a Toronto-based writer and editor.