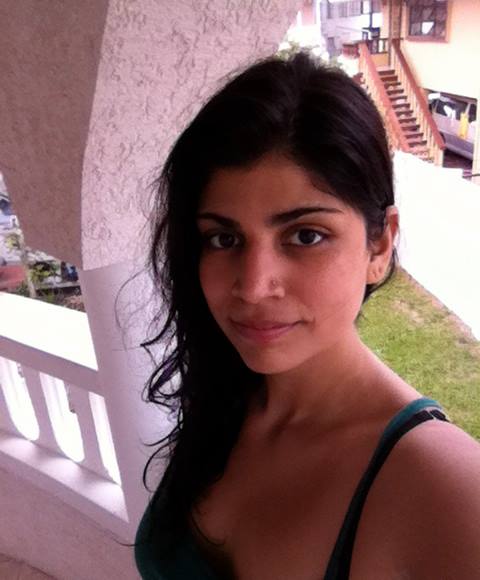 He was the first guy you dated who resembled anything you knew to be familiar. His moustache reminded you of your uncle so you told him to shave it, and he did.

He was the first guy you dated who resembled anything you knew to be familiar. His moustache reminded you of your uncle so you told him to shave it, and he did. He told you not to speak so quickly. Pronounce the sounds of each word, he said. Exactly what your mother always told you. Out of spite, you pretended you couldn’t understand his words behind his accent.

Almost every night after work, you showered and straightened your hair, then rubbed moisturizing cream on your body—the brand that, he said, made your skin taste like olives. You read a book while you waited, often a book he recommended. When the staircase of your apartment groaned with his footsteps up, you placed a bookmark on your page. Only a few moments passed before you both drowned in the darkness of your bedroom.

You wouldn’t hold his hand in public. You didn’t feel the need to advertise your relationship status—that’s what you told him, at least. So on a crowded sidewalk lit by lights seeping through storefront windows, he wrapped his arm around your shoulders so that you both walked down the sidewalk as one. When you thought you discreetly wiggled your way out from his embrace, he instead wrapped his arm around your waist, bent his head as if to kiss your cheek, and then used his teeth to snap the strap of your bra.

You refused to meet his friends. But once, on the way to an art exhibit, as the subways cars moved through the guts of the city, he told you that his friends were meeting you both at the gallery. You tried to stand up, to leave at the next stop, but he pulled your body towards him, not letting you move. You cussed him out—as quietly as you could in the crowded car—and he laughed as if you were telling him a joke that he didn’t understand.

After the exhibit, outside the gallery, you told his friends goodbye. As you both walked away from his friends, his voice became louder and louder with each step. Your identity issues, your father issues, your fear of abandonment, your issues with power, your general selfishness, your overall fucked-upness, all became ammunition during the argument you both knew was bound to happen. You accepted these excuses because the truth behind your behaviour was too shameful to admit.

He took you to his favourite restaurant: a large space made small by crowds of people—a space, he said, that reminded him of home. You let him order for you, aware that if you spoke to the waiter, he would be waiting to correct the way you said korma or kulfi or gulab jamun.

The first time he took you there, you used a piece of naan to pluck out a chunk of chicken in the thick red sauce. As you brought the food to your mouth, you made a joke about eating with your fingers. His response went off topic quickly, yet his arguments were perfectly arranged: the events he listed as evidence were in chronological order, as if rehearsed. He said that despite your brown skin, your name (that stumbled clumsily from your lips and perfectly from his), and whatever claim to “otherness” you assumed, you could never understand the complexity of the immigrant experience.

He said you had no sense of what it meant to leave a place, let alone a place where few are able to leave. He said that as an authentic South Asian, he had a responsibility to teach you—a Canadian descendant from coolies—about yourself and your ancestry.

After he researched Indian indentureship in the Caribbean, he showed up at your apartment with a textbook he borrowed from the library and a map of the subcontinent. He announced he could possibly trace your origins to a village in Bengal. This man reminded you of everything you thought you needed, and everything you wanted to forget.

The breakup was explosive and quick, like the relationship. You spent the first two weeks after cleaning your apartment. You mopped the floor in the living room over and over with buckets of lukewarm water and Lysol. You washed the velvet bedroom drapes that couldn’t keep the sunlight from his eyes.

The familiarity you felt with him provided a break from the nostalgia for a past that never belonged to you.

You scrubbed between the bathtub tiles with his toothbrush. You cleared away the wine bottles in the kitchen. You cleaned your room, and found a cookie tin container filled with old family photos your grandmother collected and bequeathed to you after she died.

In the tin of displaced memories—photos that no one in the family wanted displayed in their house—you found a photo of your great-great grandfather. He stands beside an empty chair; his height competes with the palm trees in the distance. You stared at the picture, feeling the urge to fill in the blanks of this man’s life, a man born on a boat from India to the West Indies. You framed the photo, and placed it on your living room windowsill.

The next summer, you saw your ex crouched in an aisle at a used bookstore in the Annex. You said his name, and he stood immediately then walked toward you as if he expected to see you. He was wearing a black dress shirt tucked into his jeans, and had grown out his beard that hid the baby fat on his face that may never leave him.

You told your friends about the run-in and took credit for his enhanced fashion sense.

He leaned in to kiss you on the cheek. You remembered the word he used to say whenever he kissed you, jaan. You shared the memory with him, and asked what the word meant. He furrowed his eyebrows the same way he used to when you spoke too quickly and ended up saying something you later regretted. In your head, you pieced together words to form an apology, but then he said, life.

He asked if you wanted to get something to eat. You suggested the Thai place down the street. The untied laces of his sneakers flung frantically like his hands as he spoke. The awkwardness of how he now carried himself in public diluted his words.

He told you he read your piece that was just published. I’m glad you’re still writing, he said. But then he paused, and said the narrator didn’t feel believable. What authority does the narrator have on third-world politics or third-world life, for that matter, as a Canadian? He was careful to use the word “narrator.”

He spoke whatever he thought was the truth, which was one of the reasons why you liked him. You thanked him for his opinion and averted his attention to the menu on the window of a restaurant.

As you both ate, you said his name over and over, to make up for the times he asked you to and you didn’t. You reminded him of that time when you were drunk and called him to come over to your apartment.

You both sat on the living room floor smoking his cigarettes, dropping the ashes into an empty mason jar. You crawled onto his lap, wrapped your legs around him, and said words you had never said to him before. The next morning, he asked you if you meant what you said.

And there, on the bare mattress after downing your Thai, he asked you again.

Wrapped in a bed sheet, you said goodbye to him at the door. He turned to leave, and stopped. He asked if you wanted to be friends again, start fresh. Before you could reply, he shook his head as if trying to take back his words, kissed you on the cheek, and walked down the apartment steps.

Veronica Fredericks is an artist-educator and youth worker. She holds a M.Ed. from the University of Toronto – OISE. She is based in Scarborough in Toronto’s East End.