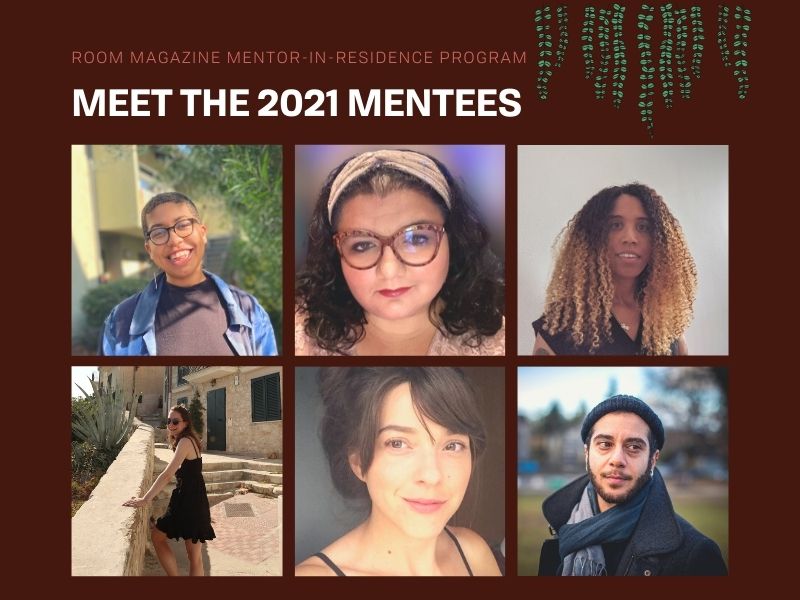 Meet the Mentees! These six emerging writers will spend three months of this year working with Téa Mutonji on their manuscripts-in-progress. Read on to see how they answered the question, “What do you want to be when you grow up?”

Room’s Mentor-in-Residence program is open to writers around the world who have not yet had a book published or completed significant post-secondary creative writing education. These mentees were selected based on the access they’ve had to creative writing institutions, and the potential demonstrated in their writing samples. 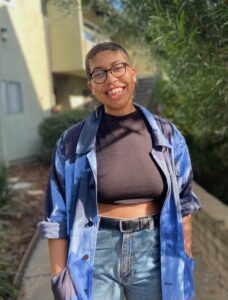 ADESINA BROWN is a biracial, queer writer from Los Angeles, California. Their first poetry collection “SOUND: Audible and Inaudible” is available on Gumroad. Their work has been featured in Exposition Review, Serendipity Literary Magazine, Rigorous Magazine, Coffee People Zine, and more, as well as in the essay anthology “Postcolonial Star Wars.” When they are not writing poetry, which is rare, they are writing (and reading) speculative fiction. As with all of their writing, their novels represent–and centre–a diverse cast of queer and trans people of colour. With this as their guiding light, they are currently working on a fantasy trilogy, with a few other projects thrown in for good measure. To view their work and get in touch with them, please feel free to visit their website https://www.adesinabrown.com/

When they grow up, they want to live in a world free of capitalism. If that doesn’t work out, they want to run a small farm sanctuary and continue writing for as long as they are able. 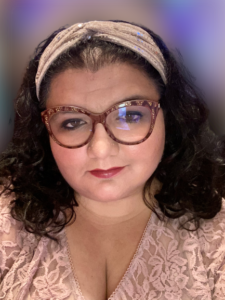 GEMMA MIKAELA GERMÁN was born and raised in a small border town called Douglas, AZ. In high school, she loved writing stories and started the Writing Club. Throughout her schooling and career changes, she discovered being a nurse wasn’t meant to be. She would rather make up stories. She earned her BA in Secondary Education and her MA in Reading and Curriculum from Grand Canyon University.

Gemma is currently a 7th grade reading teacher where she is guaranteed laughter at least twice a day. It is her dream job. What other occupation can you have a teenager describe the scent of your classroom as, “It smells like a butterfly in here”? 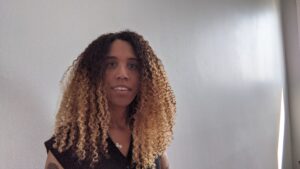 FELICIA MARONI is based in Toronto, ON and a Film Studies graduate. Her background is in comedy writing, she graduated from the Sketch Writing program from Toronto’s Second City, and Comedy Bar’s ‘Comedy Girl’ stand up program. Self-reflective humour runs through everything she writes, and she is currently writing her first novel about a Black woman who is slowly disappearing. She hopes to relate to all those other ‘alt’ Black girls and people who have always been ‘not Black enough for some, and too Black for others’.

“I want to be a Film Director when I grow up, shooting an adaptation of my own written work.” 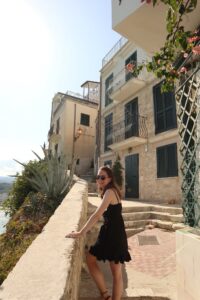 TAMSYN RIDDLE is an anti-sexual violence and disability justice organizer, and an emerging writer. She is the winner of the 2018 Canadian Community Newspaper Awards’ first place prize for Best Campus Feature Story, and the second-place winner of the 2015 Writer’s Federation of New Brunswick Sheree Fitch Prize for Young Writers. Her work has been published in People Department Magazine. She lives in Dish with One Spoon territory in Toronto/Tkaronto with her partner and (overwatered) houseplants.

“I hope that by the time I’m at an age that I now see as ‘grown up,’ we won’t live in a capitalist society where most people have to sell our wage labour and spend most of our time working just to survive. I don’t really have that many useful skills that would help me in this post-revolution future, but I love to eat cheese enough that I feel like I would be good at making it for other people.” 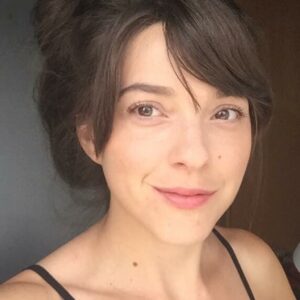 ANNE MARIE WELLS (She | Her) of Jackson, Wyoming is a queer poet, playwright, and storyteller navigating the world with a chronic illness.

“When I grow up, I hope I have helped others with my writing the way so many poets, playwrights, and storytellers before me have provided me solace, support, and wisdom with their words.” 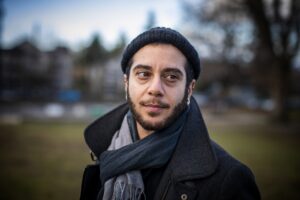 A transgender Iraqi raised in the U.A.E. and different parts of “Canada.” SALLY ZORI (They/Them) is a session musician, percussionist, and content creator. They have played stages and theatres in North America, Europe, and Australia with different bands, orchestras, musicals, theatre shows, and (one new years eve in 2008) was the percussionist for Aretha Franklin.

Today, Sally is still a session musician, percussionist, and content creator under Zori Media, a company they started in 2017 focusing on content creation for non-profits and social ventures. On the horizon, Sally is working on a project that will share the story of their experience as a third culture kid and finding Home, combining theatre with film and live musical underscoring.

“When I was a kid I always wanted to be a boy when I grew up. 3 years ago I made that happen for myself. I am living and doing everything I ever wanted to do and be when I grew up :)”