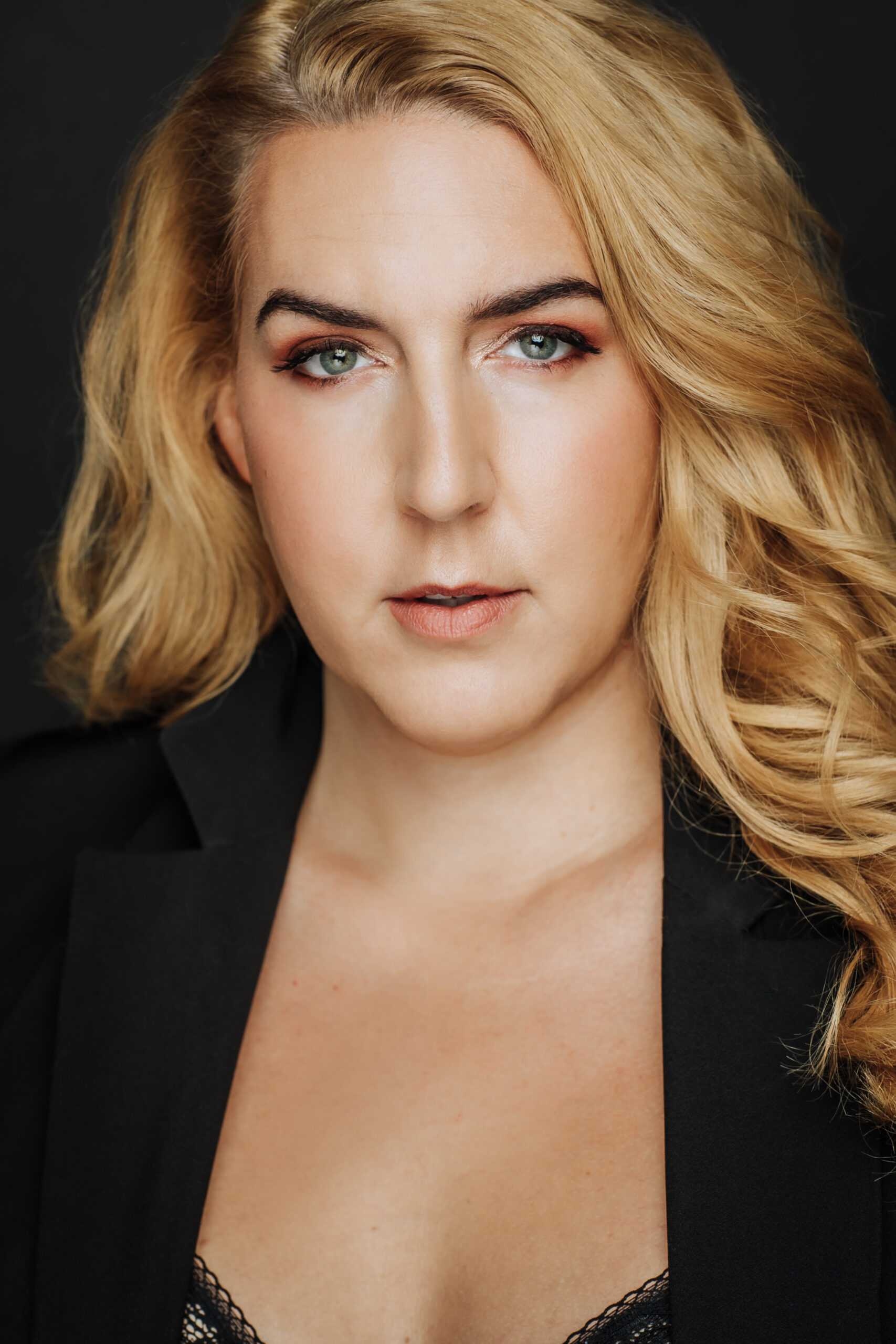 Luna Ferguson is an actor, writer, and producer. Their writing and advocacy efforts have been featured in international publications including HuffPost, VICE, BuzzFeed, Teen Vogue, OUT Magazine, NBC News, The Guardian, and the Toronto Star. Their first book, Me, Myself, They, a memoir published by House of Anansi Press, was released in May 2019.

Luna’s filmmaking includes the award-winning Whispers of Life (2013); Limina (2016), which was shown at festivals around the world and praised for its trans inclusivity and the queer love story Henry’s Heart (2019), CIRCLE (2020), and the dark comedy 0UTL4W (2021). As a producer, Luna believes in supporting new creative and compelling stories that both reflect and revitalize our reality: seeking underrepresented, marginalized and oppressed voices that still make up a minority in television and cinema.

Luna holds a PhD from the University of British Columbia in Gender, Race, Sexuality and Social Justice. They live in Vancouver, British Columbia, with their husband Florian.

Read our conversation below to learn about Luna’s relationships with writing, reading, editing, the world around them, and more. This year’s Creative Non-Fiction Contest is open until June 1st, 2022.

[This interview was conducted via Zoom.]

LUNA FERGUSON: Yes. Certainly. I think that the different mediums that I’ve contributed to over the years have reflected the journey that I’ve been on. I have a complicated relationship with writing, to be honest. I feel like writing is a bit of a torturous process for me because so much of my writing — even my academic work — sort of flows from my positionality, which has really changed over the years. I got my PhD almost five years ago, and I wrote my memoir almost four years ago now. So, I’ve changed a lot over that time, and I feel that when I’m writing. Writing is an act of creating something that’s permanent, which I’ve always struggled with because my writing is not objective. My identity has shifted so much since I wrote my memoir — I’ve legally changed my name, and anyone who knows me knows how much I’ve changed in that four-year period. I almost wish that my writing could be as fluid as I am. It stretches me emotionally to read what I’ve written in the past, and that’s a symptom of writing. To me, even the binary between fiction and nonfiction is a bit of an illusion. So, every medium is a little bit different.

ROOM: Your memoir, Me, Myself, They: Life Beyond the Binary, details your personal experiences to educate and inform readers about what life can be like for non-binary folks. You struck a careful balance between explaining the ways that being non-binary can be traumatic and showcasing the hope that comes from self-acceptance. How did you find that balance?

LF: I speak from a certain amount of privilege saying this, as a white trans person who is financially stable but the despair, the hopelessness, the feeling of being invisible is very much a reality for so many people. Feeling hopeful, feeling optimistic is also a reality for so many people. So, for me, one of the intentions that I have with my creative work is to reach out and make a connection with the reader or the person who’s watching me. Whether that’s writing in a non-academic or academic sense, acting, producing, I really want to be able to extend as many branches as possible to make those connections and for those connections to exist on a spectrum. Striking that balance is really at the heart of a lot of what I do, because there’s a bit of a responsibility as an artist to illuminate hard topics. And I feel like you need that glimpse of hope, to help people see beyond what’s happening to them.

ROOM: You mentioned in an interview with Flare that surrounding yourself with the right people played a big role in your success in writing and film. As queer people, building a “found family” that supports and uplifts us and our work can make a world of difference in our creative careers. How did you find and build your community of support?

LF: It’s all about connection for me. It’s innate, it’s from a web of connectivity that I have established in my life. And, you know, for so much of my life I felt like I was alone. I still feel that way sometimes. The creative work that I do feels like I’m falling sometimes, and that’s what it has to feel like. If you don’t fall, if you don’t surrender and release yourself, then it’s really difficult to connect with yourself as an artist. And if I’m falling, I can’t always be the one to pick myself back up. Everything that I’ve done, I’ve been able to do because of the connections in my life. As queer and trans people, we’re either sort of forced to form a chosen family, or we choose to. I think that chosen families can sometimes be so much more powerful than “actual” families because the attachments and the history aren’t the same. For me, my husband, my friends and my chosen family, along with the family members who do contribute to my life in a positive way, are all really there to support me when I fall. It’s of vital importance for most creative work. Some artists may prefer to work alone and isolate themselves, but I always have the network of support to fall into when I need to.

LF: I’ve always been into comic books. But over the last couple of years I’ve definitely really gotten back into it. I have a PhD, and here I am talking about how I enjoy reading Marvel Comics, but it’s just a bit of something that’s unexpected.

ROOM: You’re judging this year’s Creative Non-Fiction Contest: in your eyes, what’s the difference between a “good” or “great” contest submission?

LF: I’ve always had a difficult time with this idea of judging, rating and awards. But I suppose if we’re to accept the status quo as is, which I’m doing by being a judge, then my job is to assess the work and its creative merit. I’m sure all of the writing is going to be good. I’m looking for writing where I can feel that the writer has surrendered and let go. I’m looking for work that I can feel the writer has made themselves proud in that act of moving beyond what’s on the page (accepting it), and the fear that comes with writing, because I think that’s what great work is. What I’m looking for are the voices that have dared beyond the fear and travelled into a genuine, authentic voice, who they are as writer.

ROOM: Everyone seems to have a different idea about what classifies a work as “creative non-fiction”. How do you define the genre?

LF: I hate defining things, because how do you define it? I appreciate that people’s definitions could be slightly different. I think the question kind of answers itself in a way, because even if we’re writing non-fiction, we’re still engaging creatively. So, I don’t think it’s for me to say how much creative energy should be applied to non-fiction writing to be deemed “creative”. I think that’s different for each writer.

ROOM: Do you have any advice for emerging writers, or writers who might be submitting to a contest for the first time?

LF: If we’re talking about creative nonfiction, I feel that a lot of the magic happens with the alchemy of the process. My piece of advice is to write, and not go back right away to look at it and edit it. Instead, just allow the writing to exist, take some time with it. I think we’re so used to writing and immediately reading things over because of social media — we automatically analyze the words that we write. I’m trying that more, where I’m allowing myself to just write and not go back in a short amount of time to start to revise. I think we do edit for the purpose of being grammatically correct, or clear, but sometimes, powerful writing means leaving your work. Don’t feel like you automatically have to edit or revise for grammar or clarity. Sometimes, the revisions happen because we’re scared that we may have shared too much in the writing. But there’s nothing wrong with that, because it’s just your relationship with the page at that point.

b. pick (they/them) is a lesbian poet, an earring maker, and an aspiring academic. b.’s poetry focuses on road trips, falling out of love, and deserted places. Their work has recently been featured in SAPPHIC, The Madrigal, and Pile Press, among others. They are an incoming PhD student at Western University, where they will be studying intersections of entrepreneurship and gender theory. When they aren’t writing, b. is passionately involved in initiatives that support and uplift queer and trans students. You can find b. on Twitter @_bpick.
Tags: b. pick | CNF | CNF 2022 | Contest 2022 | Creative Non-Fiction | creative non-fiction contest | Luna Ferguson