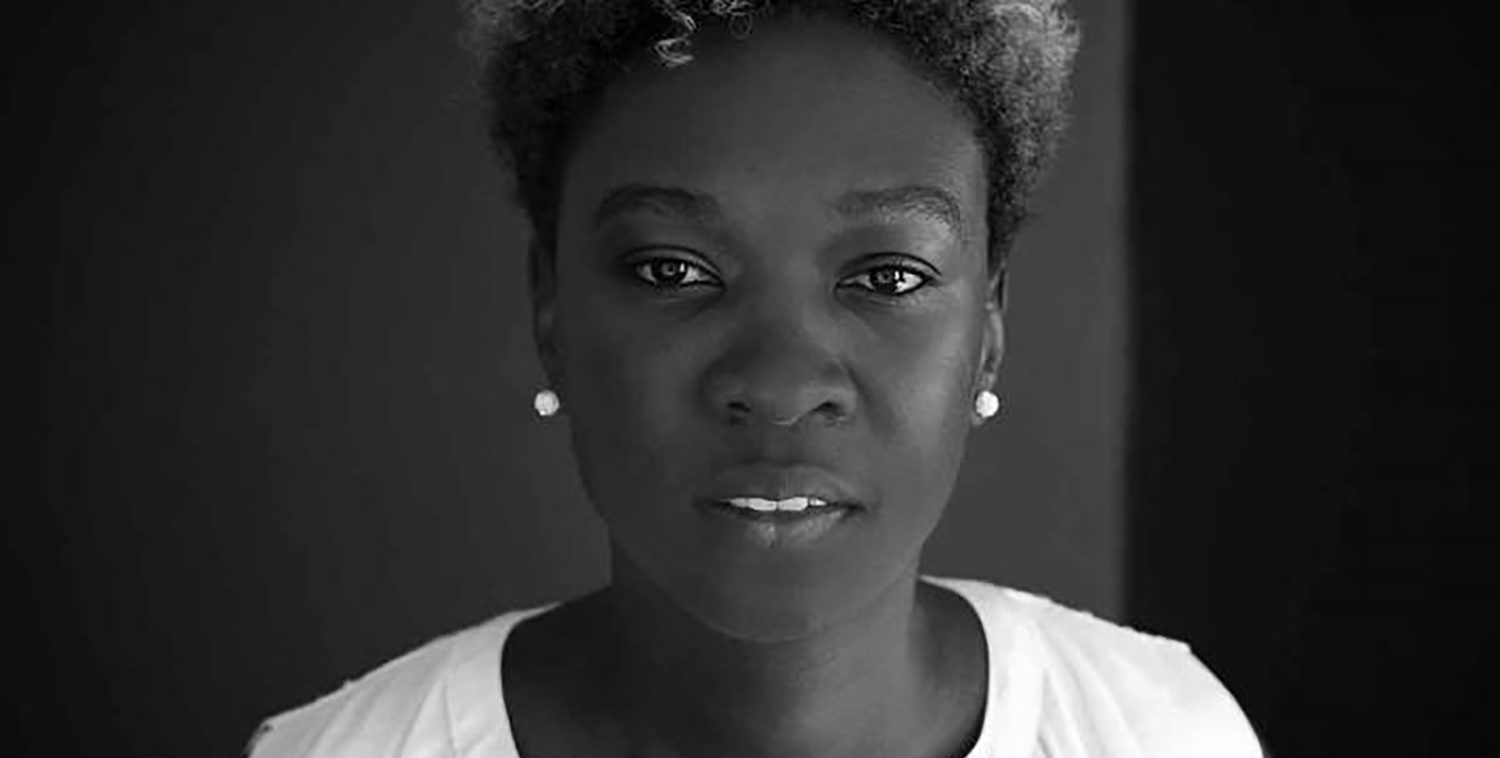 In celebration of our 2020 poetry contest, Room editorial board member, Hope Lauterbach, had the opportunity to ask Lubrin a few questions about her book-length poem, The Dyzgraphxst, writing craft, and what she looks for in a poem.

Our 2020 Poetry Contest judge, Canisia Lubrin, is a writer, editor, critic and teacher born in St. Lucia. Published and anthologized internationally, her work has been translated into Spanish, Italian and is forthcoming in French and German. Lubrin’s writing has been recognized by, among others, the Toronto Book Award, bp Nichol Award, Raymond Souster Award, Journey Prize, Gerald Lampert Award, Pat Lowther Award, York University’s President’s Prize for Poetry, and the Writers Trust of Canada Rising Star prize. Lubrin’s poetry debut, Voodoo Hypothesis (Buckrider Books, 2017) was named a CBC Best Book, and a top 10 must-read book by the League of Canadian Poets and the CBC named Lubrin a writer to watch in 2018. Her second poetry book is The Dyzgraphxst (McClelland & Stewart, 2020). NOW Magazine featured Lubrin in their 2020 Black Futures issue. She was 2019 Writer-In-Residence at Queen’s University and poetry faculty for the Banff Centre’s Emerging Writers Intensive. Lubrin completed an MFA at the University of Guelph.

In celebration of our poetry contest, Room editorial board member, Hope Lauterbach, had the opportunity to ask Lubrin a few questions about her book-length poem, The Dyzgraphxst, writing craft, and what she looks for in a poem.

ROOM: Your latest book, The Dyzgraphxst, explores identity by splitting the “I” into three parts, then creating a chorus voice, Jejune, to lead us through the book. When you write, how do you decide the narrative voice, or is it a conscious choice?

Canisia Lubrin: I should say that the book doesn’t explore identity so much as identity is a small part of its multiplex, you know, and so The Dyzgraphxst fits uneasily in the tradition of epic poetry even though it isn’t mainly organized by narrative. Insofar as it is poetry and unconcerned with narrative per se, the shape of its work engages juxtaposition, accumulation, cycling, and interruptions of voice. It may not seem this way but writing for me is simultaneously a gut-level and head-level engagement with language. There’s play as well as a serious degree of intention. I don’t know that I decide on voice because your voice is your voice, you know what I mean? But I do make conscious decisions regarding the quality of the work’s sounds and its parameters.

This poem is polyphonic because it needs to be. It is a disruption of the usual deployment of the lyric I and so even what it repeats it needs, also somewhat, to break. What I am saying, perhaps, is that voice happens via the confluence of both aesthetic decisions and how the materials of language create the conditions of sound without the poet’s conscious input. Maybe you follow the impulse and offer it your range of skills.

“It may not seem this way but writing for me is simultaneously a gut-level and head-level engagement with language. There’s play as well as a serious degree of intention.”

ROOM: “The character never leaves the stage. The character must always leave the stage. This is an ocean drama.” What was your process for orchestrating the movement of the long poem? The book feels like a journey.

CL: I was saying before something about breakage. Let me go back there to answer this question. That breakage of sounds (which is a kind of language-improvisation) is my particular maneuver with register (both range and record). I intended for the work to speak in multiple registers because it attempts to investigate the overlapping problem of the self as it pertains to the historically supremacist category of “the human” and the deadly hierarchies and material conditions this involves. But that approach needs to carry its own context within both familiar and unfamiliar constructs of kinship and communion. Once I realized I was writing a book-length poem, and once I found the thematic core (a metaphorizing of dysgraphia as theorized by Christina Sharpe in In The Wake: On Blackness and Being and of opacity as theorized by Edouard Glissant in Poets of Relation), it became clear to me that at some point I would need to find a way to ground the heady stuff with the intimacy and vulnerability of the body. That is when Jejune appears. Jejune is the figure through whom all of the selves in the poem (any of them an “I” in different POVs) congregate and accumulate. Jejune is also who is directly addressed. Jejune allows for the necessary kind of fracturing (pronoun splitting) that exposes the incongruencies created by the supremacist category of the human self I mentioned earlier. There’s a lot of thought out there, especially but not exclusively by Caribbean thinkers, about the human self as historical coinage that in the hands of European enlightenment created and maintains a lot of bullshit. The movement of the poem, then, addresses this in its own way without disavowing the messy kind of thing that can still orchestrate a fullness of being. And because dysgraphia means difficult writing this created something relatively incoherent. That amorphous quality to me characterizes the African diaspora and is why the poem spans geographies. But the poem also depends on a kind of nontime or at least a kind of cyclic rhythm/movement, which, in the manner of Kamau Brathwaite’s tidalectics, the ocean best represents. I wanted also to create a structure into which anyone can read the poem and fit themselves somehow into the poem’s address. That’s the philosophical nature of the journey.

ROOM: What is your favourite part of the writing process?

CL: I have a lot of trouble with the word favourite. It never allows me to think or feel clearly. I appreciate the drafting process and then the messy in-betweeness of filling out what is drafted. The hard-knotting life of language and ideas and improvisation before the work takes a shape that you can no longer play with because to do that is to unravel the whole thing. Editing is also interesting but not as satisfying as figuring out the work. That “making” stage to me, because of the capaciousness of discovery in it, is wonderful. It is also very frustrating. Editing for me can feel a lot like mathematics.

ROOM: When I read The Dyzgraphxst, I felt the words on a rhythmic level first. I felt connected and pulled in with an indescribable sense of familiarity. Once your poems exist in the world for everyone to read, do you still feel the same connection to the work that you did while crafting it? How does it feel to hear lines quoted back to you, or to see excerpts of your work on a stranger’s social media?

CL: I don’t linger on encountering my writing out there in the world doing things that readers ask it to do. Meaning is made between the reader and what is written and that kind of meaning is where it belongs, as varied as that may be. I suppose I always have the experience of writing the book, and that is a space into which no one else (apart from my editor and a select few readers) intervenes. At most there is the pause I participate in; the one that involves the necessary exchanges of recognition that the world of social media or other institutions asks of its participants. It means a great deal that the books we write are read and studied and shared and interacted with well beyond what we know. Beyond that, I’m already well into the next work. I have no time to be attached in such a way that I can be persuaded to persist in the feeling of encountering it as read by others. But time is a funny thing. Things in retrospect are never in scale.

ROOM: In an Open Book column you were quoted, “Poetry is magic. Poetry is spell-casting. It is so because words have meaning, which inscribes them a particular power.” What advice would you give to an emerging poet on harnessing the power of their words?

CL: Be daring in what you write and think long and hard before you foreclose any possibilities that present themselves to you in the process.

ROOM: What aspects of a poem make you fall in love with it? And can you share a couple of examples?

CL: Any poem that leaves me with an amplitude of feeling and an undeniable appreciation for how it uses language—however that appears—makes for superb reading. See “Grief Work” or any poem by Natalie Diaz (her new book Postcolonial Love Poem is like air in the lungs), see Inventory, The Blue Clerk, Ossuaries, really, anything by Dionne Brand, see An Atlas of the Difficult World by Adrienne Rich, see “Object Permanence” by Nicole Sealey, poetry by Jillian Christmas, Ross Gay, Gwendolyn McEwan, Danielle Boodoo-Fortune, Victoria Adukwei Bulley, and so many others.

ROOM: What are you most looking forward to in your role as our poetry contest judge?

CL: Reading the poems, finding new voices to seek out further, getting a broader sense of the range of work that poets are creating out there. It is never fun choosing winners and whatever the opposite of that is.