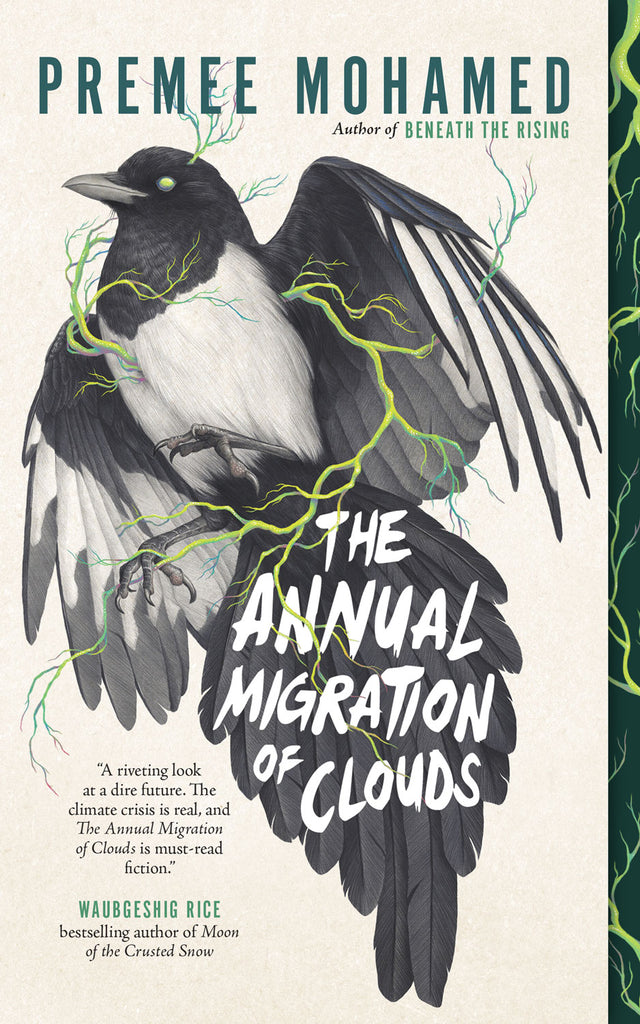 In Clouds of Science Fiction: Interview with Premee Mohamed

Premee Mohamed is an Indo-Caribbean scientist and speculative fiction author in Edmonton, Alberta. She has guest-edited novellas with Interstellar Flight Press and short fiction with Apparition Lit. Her work has appeared in Analog, Escape Pod, Augur, Nightmare Magazine, Shoreline of Infinity, and PodCastle. Solicited appearances include The Deadlands, A Secret Guide to Fighting Elder Gods, and Jo Walton’s New Decameron. In 2017 she was nominated for the Pushcart Prize for her story ‘Willing’ (Third Flatiron Press). Her debut novel, Beneath the Rising was a finalist for the Crawford Award, the Aurora Award, the British Fantasy Award, and the Locus Award.

Mohamed is also the author of A Broken Darkness and the novellas These Lifeless Things, And What Can We Offer You Tonight, and The Annual Migration of Clouds, which is the subject of our conversation below, amongst other fun subjects: Alberta, sci-fantasy, and what it takes to publish fiction about a disease, amid a real pandemic.

ROOM: When you’re not writing, what do you do?

PREMEE MOHAMED: I have very much not quit my day job because writing pays pennies. [Laughs] I’m a policy specialist with the government of Alberta; I work for Alberta Environment and Parks. When I’m not yelling at people, our group writes policy mainly about human activities on the landscape and how to mitigate them before they start and do some monitoring while they’re running, and afterwards, clean up and remediate so that the land can be used again. Sometimes get called in to consult with the other groups like water and air.

ROOM: Because you wrote a book about an apocalypse and a world where things are difficult, I imagine your day job probably influenced a little bit of that writing process and the eventual story. Do you mind sharing how the original idea for “The Annual Migration of Clouds” came to you?

PM: I didn’t think consciously that my job influenced my writing. But back around the summer of 2019, I was scrolling Twitter, as one does, and came across a paper written by scientists. I’m guessing an entomologist wrote about a certain arthropod species infected. It sat with me for a bit, and I was like, “well, this is interesting and could be a cool little short story.” Then I started writing one from the point of view of scientists researching it and discovering it, then I stopped, thinking it felt kind of off. Then I started writing it from the perspective of someone living with a disease, which is often hideously painful and terminal. I thought about how one couldn’t test for the disease and set the story in a time when society couldn’t, so I thought of the 1700s, but that didn’t work, so I set it in the future. That’s how it all came together. As I was writing, it occurred to me that this is exactly how it would happen—climate change makes this disease harder to deal with, and the disease makes climate change harder to deal with, and neither of them gets solved. That’s how you end up with the situation in the “Annual Migration of Clouds.” I wrote this around June, July of 2019-ish, and it was picked up by a ECW press a couple of months later, so it didn’t predict COVID-19 in any way.

ROOM: Your book has been described as a hope-punk.” What does that term mean to you? Do you agree with that assessment?

PM: I hadn’t really heard of that term before, and then when the listing for the book went live, they said it was “hope-punk.” And I thought, “cool!” I did look into it and did some reading because the book is not what I would have thought of as “hope-punk,” but when I started to do some more reading about it, especially on Tumblr, it made sense. The term is the opposite of “grim-dark,” so bad things happen, but the characters don’t either go limp and give up or succumb to their worst impulses of cruelty and selfishness, the way they might do in “grimdark.” It’s not so much about mindless optimism, I don’t think. It’s about seeing the world as it is and saying to yourself as a character, “I am going to hope for better, and I’m going to work towards better. And the way I’m going to do it is with people instead of against people.” I think that’s exactly what Reid [the protagonist] is trying to do.

ROOM: In the science and literary world, both require a certain community to succeed. Community is a central theme in the book, and did that come from your own sense of community? Why was it so important to have community be such a force in your fictional novel?

PM: In the novel, community felt so important to me because, for years, I had read the kind of apocalypse story where society kind of flies apart and never comes back together. And after you read enough survivalist stories like that, you start to become very sensitive to them. I like looking at stories that kind of go against that. I’m thinking of the Ursula K. LeGuin books that say after a disaster, what saves us is community, not strength and territorialism. I like that, and I thought, instinctively, that’s how it should go after a disaster; people forming actual communities.

ROOM: Could you share your experience as a woman of colour in sci-fi? Is there any advice you would give to women of colour who want to write science fiction?

PM: We are out there, and there’s a lot of us writing really good science fiction. Look at the award winners for the last couple of years, like N.K. Jemisin, whose books that I loved. I have never really felt explicitly discriminated against by publishing; all of my publishers have been great. What it feels like, though, sometimes, is that most of the time, people aren’t bothering to be racist or misogynist on purpose. They’ll fly over us, making a list of the “Best Sci-fi Books,” and 49 of them will be by white men and women. I think a lot of us sometimes succumb to thinking that we’re not good enough— if we’re getting into anthologies, or if we’re having books published, or getting big advances, it’s because somebody, somewhere had a checkbox to check, and I hate that, and have felt that pretty often. When I get a solicitation for an anthology, part of me always wants to write back asking who else is included and who isn’t, though I know most editors are working in good faith.

If I had any advice, it would be to read lots of sci-fi by women of colour, to see the huge breadth, depth, and intelligence and work that’s out there, and to also build a community around yourself of women and non-binary science fiction writers and let the tired old white dudes keep doing whatever it is they’re doing.

Premee Mohamed is an Indo-Caribbean scientist and speculative fiction author based in Edmonton, Alberta. Her short fiction has appeared in a number of venues. Her debut novel, Beneath the Rising, is out now from Solaris Books, with the sequel A Broken Darkness due out in 2021.

Furqan (pronounced Fur-khan) Mohamed (she/her) is a Black Muslim student and writer. She lives, works, and learns in Toronto, which sits on the traditional territories of the Mississaugas of the Credit, the Anishinabek, Huron-Wendat, and Haudenosaunee peoples. Her work centers around culture and social justice and is often inspired by her diaspora, community, and the stories that can stem from shared human experience.

She currently serves as Culture Editor for mimp Magazine. Her poetry and essays have appeared online and in print for various publications, such as mimp, Feels Zine, Toronto Life, Maisonneuve, Return Trip, and Room Magazine, among others. Furqan is a former Journalism Fellow at The Local Magazine. She is currently studying as an undergraduate student at the University of Toronto.