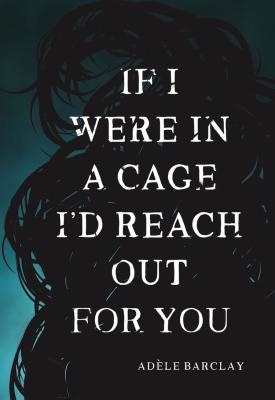 Pulsing with an old-world, occult feel, Barclay’s poetry draws the reader back in time with its tarot readers, bearded ladies, riding caps, griffins, and witchery.

Yet Barclay’s poems are both contemporary and relevant. Millennial anxieties are a common thread (“I’m so tired / I can’t even curate / a good life” or “our stupid hands / scratching at glass screens”), as is the desire for digital-era connection (“I watched the new Grimes video / hoping to find you in feathers”). The wry, often humorous voice of the narrator feels intimate and familiar, like that of the friend you’re in a semi-permanent state of physical separation with but still speak to every day, by “dial-up telepathy,” text messages, and handwritten letters. But here, the longing is also carnal, marked by blood, bruises, blisters, and body heat. If I Were in a Cage wonders aloud whether closeness is sustainable from afar.

A variety of expertly rendered settings reinforce this question. Within the first two poems, Barclay moves from the “slick jaws / of Brooklyn” to small-town Ontario, where “a grunge trio’s name / references Alice Munro.” In Montréal, “darkness in winter is anyone’s game,” while the Pacific Northwest is all “witchery, rain, chanterelles, and moss.” “I have destinations / to tally” writes Barclay, and whether it’s San Bernardino, Paris, Michigan, or rural Alberta, her deftly observed details safeguard the reader’s perception of each place.

“There’s language / and then there’s language” claims the narrator in “Grammar by the Minute,” and Barclay’s language is both keen and vivid (“The faucet / is a siren, the pipes freeze a rusted melody”), while sensations are contorted (“I’ve / turned Saturn / in my mouth / like an olive pit”) to defy our expectations. At times, it feels like Barclay is a magician pulling back the curtains of perception and memory to reveal something more enduring. The opening poem is one of six Dear Sara’s interspersed throughout this collection, and by “Dear Sara VI,” the final poem, time has passed and place names have changed, but it’s love that appears to endure. In its exploration of intimacy, If I Were in a Cage is at its most reverent and mystical.

Carly Rosalie Vandergriendt’s fiction has recently appeared in (parenthetical), Matrix, Cosmonaut’s Avenue, and Room’s Canadian Gothic issue (39.3). She lives in Montréal, where she is at work on her first novel. Visit her at carlyrosalie.com or follow her on Twitter @carlyrosalie.