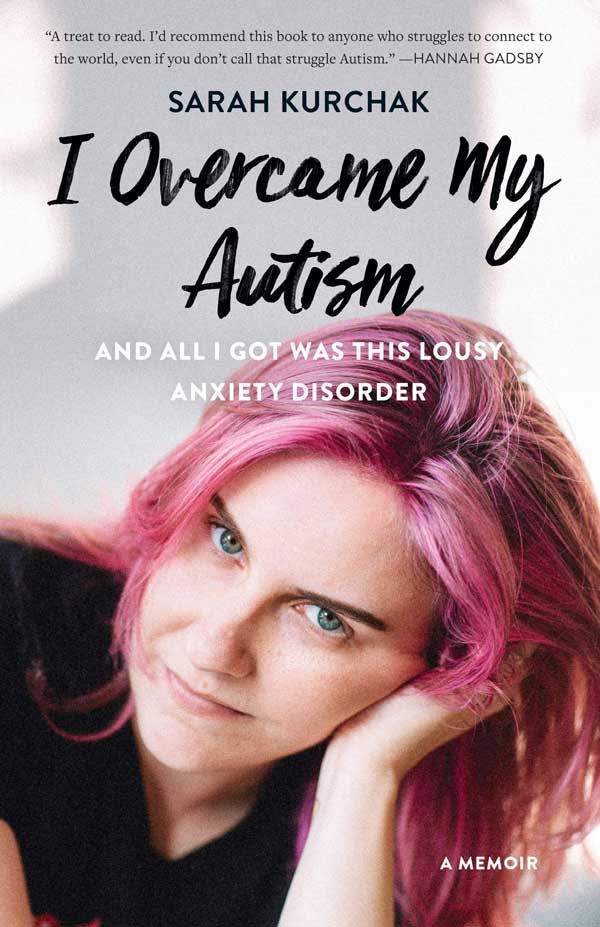 I Overcame My Autism and All I Got Was This Lousy Anxiety Disorder: A Memoir

In her memoir, I Overcame My Autism and All I Got Was This Lousy Anxiety Disorder, Sarah Kurchak takes us through her step-by-step process for navigating an autistic life. Raised in the Niagara Region, school posed a challenge for her. Knowing she was different, Kurchak experimented with careful observations of her peers, methodically constructing a framework for normal behaviour. She systematically reformed her own so she could blend as seamlessly as possible into an ableist world.
For autistic people, this masking is a mode of survival. But it’s also a strategy that, in a catch twenty-two, prevents autistic kids from receiving the support they need. The normative, dogmatic perception of autistics, Kurchak argues, is that if they do “something differently, it’s probably disordered. If they’re struggling in any aspect of their lives, it’s probably because of those disordered behaviours. If you fix the behaviour, you can improve the outcome.” Kurchak argues that despite these attempts to alter behaviour, the effort required of autistics to maintain those changes on a daily basis is a one-way ticket to burnout. Kurchak began to feel this burnout, both from maintaining a non-autistic facade and working two jobs. In her twenties, this finally led to a diagnosis.
As Kurchak entered the world of freelance writing, she began asking, just because a behaviour is different, does that mean it’s wrong? “Why is eye contact still forced when so many autistic people have pointed out that the effort and discomfort involved actually makes [them] less capable of participating in conversations?” The answer is simple: because it makes “normals” (non-autistic) feel comfortable.
Kurchak takes her reader through a life of sensory overload (that can make her feel like she’s wearing skin-shredding clothing), lists of appropriate behaviours, misunderstanding, and ableism. But through it, she discovers places she could be herself—professional pillow fighting, a freelance writing career that allows her obscure pop-culture obsessions to flourish, and a partner who loves her not despite or because of her uniqueness, but rather just as is.
I Overcame My Autism’s takeaway is that regardless of intentions both within and outside autistic communities, autism is perceived as something to fix, to rearrange, forced conformability veiled as assistance. It presents a moral that no autistic person’s story is property of “normals.” Kurchak owes us nothing. Yet, no matter how loud the truth may ring, Kurchak concludes that there will always be those who would “hate and fear the concept of you so much that the risk of disease and possible death [from refusing vaccines] is preferable to the risk of having to care for or about someone like you.”
An important lesson to take home.

K. J. Aiello is a Toronto-based disabled writer. Her previous publications include The Globe and Mail, This, and Dreamers Creative Writing, among others. Her work focuses primarily on disability, mental health, inclusivity, and the intersection of fantasy in telling these narratives. Her book reviews are of the same nature.