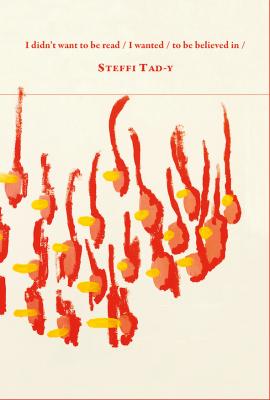 The thirteenth chapbook published as part of Frog Hollow Press’s Dis/Ability Series, Steffi Tad-y’s I didn’t want to be read / I wanted / to be believed in / is a luminous debut that playfully meditates on the joys and cruelties of language, perception, and memory. Using bipolar disorder as a prism for reflecting on childhood, diaspora, class, and colonization, Tad-y’s speaker refuses pathology as a field of knowing. Acting instead as “a headstrong historian” wanting “to probe / what centuries of being owned / catapults into a psyche,” she claims authority over her experiences while deftly diagnosing systems of domination that overlook mentally ill Filipina migrants.

Evoking agrarian, epistemological, and competitive sports connotations of “field,” the chapbook opens with the declaration that to “speak only in flowers / in a field like this / is the sharpest blade of all.” This short Ars Poetica argues that tilling beauty from hard, barren places is a necessary act of criticism—not just whimsy— within poetry. As is the case in “Flickering,” this tilling involves picturing unlikely moments of tenderness with an uncle who, while remembered in family lore as prone to delusions and physical fights, bonded with the speaker over Muhammed Ali and Bruce Lee. Seeing him as a mentor who taught her “having our brains on fire / doesn’t mean / we were only meant to burn things down. /,” Tad-y’s speaker exudes empathy, making for an enduring read on an otherwise painful subject. In both “Flickering” and “Aurora’s Haibun,” slashes break up each prose poem to approximate line breaks, generating urgency and precision. This quick yet deliberate pace transforms stigmatized behaviour into acts of subversion, including one of my favourites: “I stole books / from the university / but in my head / I was only getting retribution / for the times they did not listen / to brown women / like me.”
As the title suggests, I didn’t want to be read / I wanted / to be believed in is concerned with truth within literature and whose testimony counts with regards to psychosis and mania. Power structures, not mental illness, ensure that speech is always a site of struggle. When Tad-y’s speaker asks readers to imagine “a world where every person / does not doubt their word and what they mean,” she beckons a shift in thinking as expansive as the magnitude of movements within the poems themselves. Traversing leisurely from “the core / of the earth” to a planet of opposites to the “flit of a hummingbird,” these poems are custodians of both the cosmic and minutiae. I am urged to join the ride and will remember their care and discernment for a long time.

Jane Shi is a queer Chinese settler living on the unceded, traditional, and ancestral territories of the Musqueam, Squamish, and Tsleil-Waututh First Nations. Her writing can be found in Poetry Is Dead, Room, LooseLeaf, Canthius, and PRISM International, among others. Find her online at @pipagaopoetry.