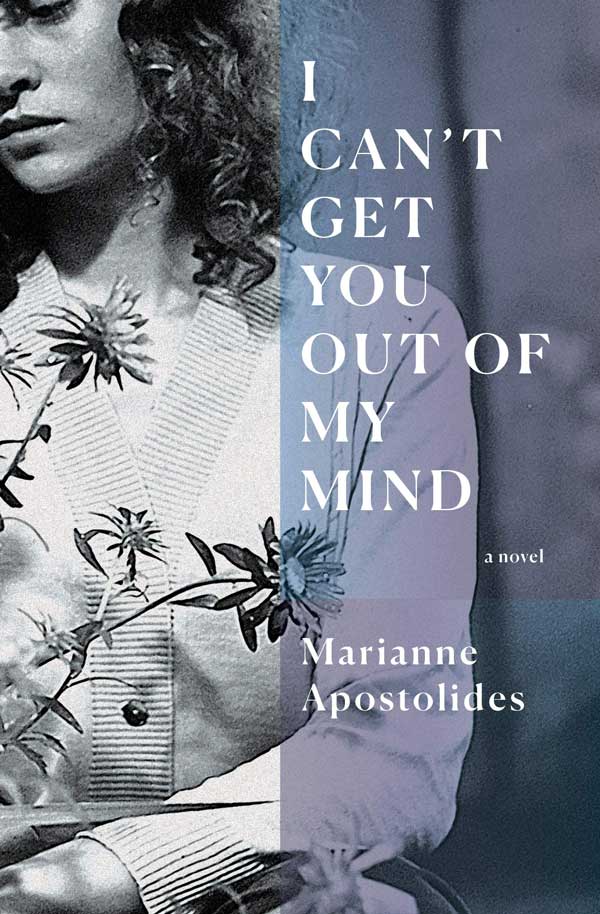 I Can’t Get You Out of My Mind

Marianne Apostolides delves into the philosophical writings of J.L. Austin and Jacques Derrida in the first few pages of her ambitious novel on what it means to say “I love you”—a universal utterance that is always on the edge of being misunderstood. Ariadne Samsarelos, the forty-something writer at the centre of I Can’t Get You Out of My Mind, sets out to answer this question using her own personal intimacies as narrative research. “What do you want to hear when I speak those words at night,” she writes. “What do I want to convey with those words.”
To make sense of her on-and-off affair with Adam, a “sort-of-married” man, Ariadne embarks on writing a manuscript about the declaration of love. At the same time, she joins a research study to support herself financially as she writes her book, which requires living for one year with an AI named Dirk. Ariadne ref- erences Austin and Derrida’s “performative speech act” theory, which helps frame her exploration of love as an “act” of professing, but later turns to Heidegger, who understands the essence of language as “the capacity, of humans, to tell a lie.”
Ariadne draws on both personal experiences and literary sources in the recesses of her memory: the Greeks, where the mercurial goddess Aphrodite only declares “I love you” once in all of ancient literature, but to Helen in a moment of anger; her ex-lover Marty, who really meant “thank you” when he unwittingly declared his love in what she calls a “premature ejaculation of language”; her ex-husband, to whom she has never uttered these three words, or received them; and four-year-old Ariadne, who couldn’t have fathomed what those words meant to her mother, except that they held power. As Ariadne’s cousin, Fotios, says: “Language is ambiguous.”
Ariadne admits to “chasing” Derrida throughout the book, but she also leans on many other Western thinkers like Freud, Jacques Lacan, and Bertrand Russell, with each one bringing a different perspective that enriches the narrative. Ariadne’s relationship to Dirk similarly raises interesting questions about how AI encroaches on the body and the brain—but although Ariadne briefly mentions Alan Turing, the father of AI, she falls short on delivering the same nuance on AI as her philosophical musings.
While the inclusion of an AI element allows Apostolides to move more fluidly between two distinct structures of writing—a first-person narrative mostly comprised of Ariadne’s manuscript, and a third-person perspective where Ariadne interacts with Dirk and the real world—the issues around data, privacy, and consciousness may have been more meaningfully developed as its own story.
What I Can’t Get You Out of My Mind does masterfully is examine love through the lens of Ariadne, poetically weaving in the philosophy and literary writings that inform her understanding of the world. When Apostolides focuses on these strengths, the book is captivating, inquisitive, and provocative. As Ariadne says, “These words have power.”

Nadia Siu Van is a Toronto-based writer and editor.