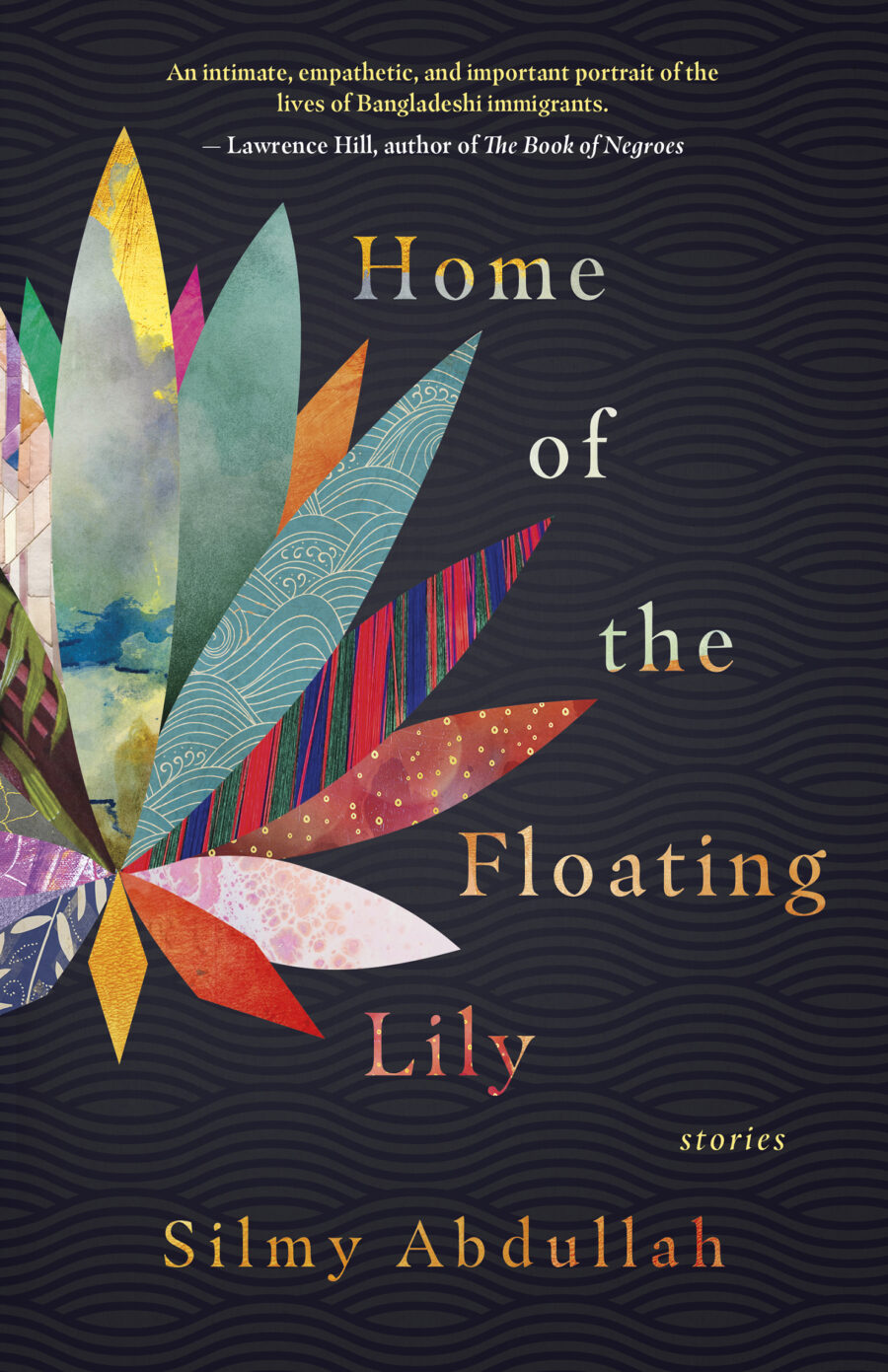 Home of the Floating Lily

Silmy Abdullah’s Home of the Floating Lily begins and ends with the idea of ‘home.’ The stories focus on characters wrestling with migration, containment, and forging new identities as ‘foreigners’ on Canadian soil. Set primarily in Crescent Oak Village (a fictitious apartment complex in Toronto, Ontario) and Dhaka, Bangladesh, the stories highlight the struggles of Bangladeshi women and men longing for connection and ‘home.’

Abdullah focuses on multi-dimensional characters: entrepreneurial female divorcées and husbands with a softer touch are peppered in with unlikeable women who gossip and men who physically abuse their wives. Character interiority is illustrated such that readers are challenged to forego stereotypes about brown women and men. For example, Abid, a widower, marries Tahmina, a professional woman who works for ICBC and blow dries her hair straight, smokes her eyes with grey shadow and mascara, paints her lips with maroon lipstick, and slips into silver stiletto for a dinner party, unites him with his estranged daughter, and leaves him. Or there is Shahed, who encourages his somewhat more forceful wife to take a softer approach to their son’s rogue behaviour and to ‘stay in the middle’ to allow them to create a life in Canada.

The strength of these stories lies in deconstructing the concepts of ‘good immigrant’ or ‘good citizen.’ Characters in the stories set in Canada recreate identity against the backdrop of a hostile nation and, rather than zero in on popular media sound bites, the focus remains on the resistance against this violence and the integrity of character development. A white man tears a woman’s hijab off while yelling ‘Muslim bitch! Go home!’ and a Bangladeshi man bludgeons his wife to death, leaving their daughter in the hands of social services. In both cases, female characters rise and resist these injustices by facing their fears and standing up for their faith and beliefs. Home is reimagined to be not only soil but the political act of naming a country as ‘home.’

Abdullah does a deep emotional dive with characters and readers witness the trauma they wrestle with in rebuilding their lives. The stories are an emphatic reminder about the unfinished business of ‘home’ and all its tensions with identities. Fractured relationships with self and others and the desire to be accepted, we’re reminded, are shaped by circumstances. Where we land can be a personal decision informed by the socio-political landscape and relationships that intersect and inform our lives. Rather than treat migrant life experiences as spectacle, Abdullah normalizes the everyday lives of characters and readers are left wanting more.

Editor’s note: This review previously stated incorrectly that Home of the Floating Lily includes stories of the Pakistani diaspora, and states as much in the print version of the magazine. We apologize for any confusion.

Mridula Morgan is a cis female settler of colour living on unceded Indigenous territory of the xʷməθkʷəy̓ əm (Musqueam), Sḵwx̱wú7mesh (Squamish), and Sel ̓íl̓witulh (Tsleil- Waututh) Nations. She writes to feel seen and heard and is currently working on a memoir that documents how the colonization of India fractured and erased her family.