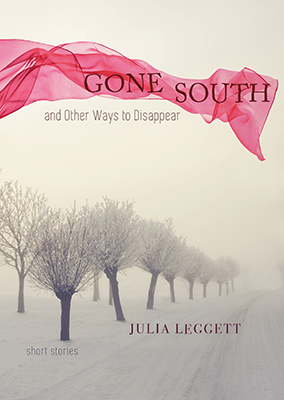 Gone South and Other Ways to Disappear

Julia Leggett’s debut collection, Gone South and Other Ways to Disappear, is a look into the lives of eight women as they experience varying degrees of disappointment. These are stories that take place just as the rug of how-the-protagonists-thought-life-should-be is pulled out from under them and they’re left vulnerable and, often, alone. Throughout the collection, Leggett finely balances dialogue and character-driven storytelling to create a binge-worthy reading experience.

From a story about a woman who finally loses weight with the help of magical pills in “Thin,” to a woman who goes to an all-inclusive resort and insults a local in “Snow Bunny,” to a woman finally leaving her abusive husband in “One More Goodbye,” these are stories that peer into the lives of women who struggle with not feeling sophisticated enough, young enough, or able to trust enough.

And while her characters may not resolve the feeling of not measuring up, Leggett’s storytelling skillfully and playfully examines some of the structures that have led her protagonists there. For example, in “Lena Reynolds Gets Divorced,” a woman deals with the surprise of a husband who has left her for his administrative assistant, twelve years his junior. Leggett explores Lena’s stages of relationship grief with moments of dark humour and a touch of magical realism that results in a panic-fueled alien autopsy. It’s Leggett’s flair for veering from perfectly resolved endings toward complicated and difficult conclusions that resonate long after the final words.

“Into the Blue” is one of Leggett’s stories where she departs from a dialogue-driven style. In it she tells the poetic and cinematic experience of a woman after she is killed in a car accident. The prose details each moment of the accident: “You could be watching from a position outside a frame. The rain has stopped. Steam rises from the tarmac. The pines drip. A 1993 blue Ford truck towing a camper comes round the bend. In the fullness of the corner, the front left tire on the Ford blows.” What results is a layered and nuanced portrait of the thin line between life and death.

Gone South and Other Ways to Disappear is a first collection with energy, quick and engaging dialogue, and quiet insights on life as a single woman. Hopefully this style is a foreshadowing of the future writing we can look forward to from Leggett.