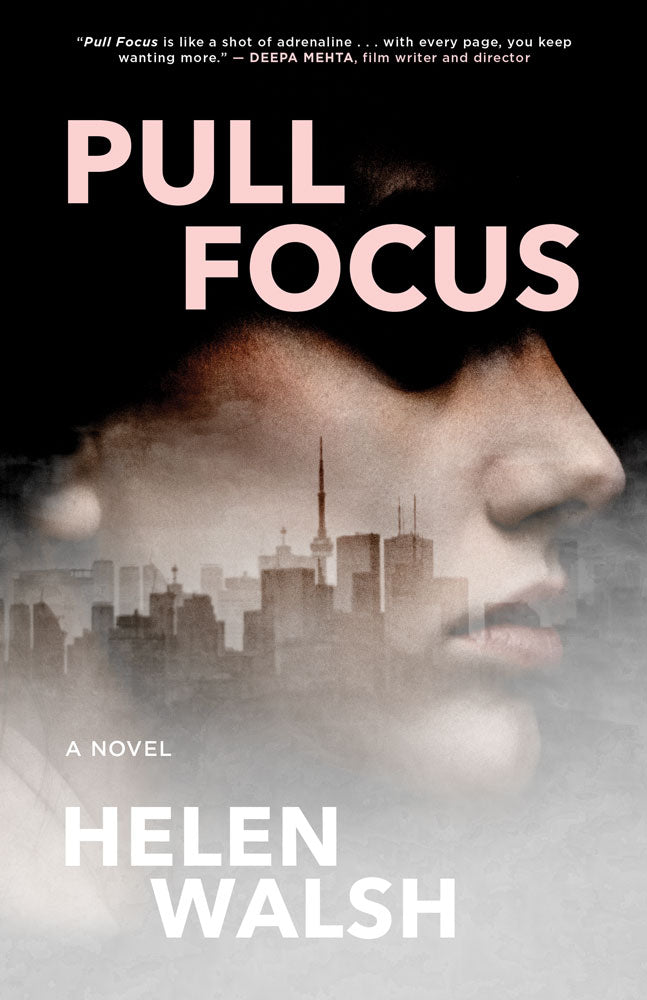 Helen Walsh is the founder and president of Diaspora Dialogues, a national organization that mentors writers and supports them with their craft. Walsh previously published and led the Literary Review of Canada and directed Spur, an arts and politics festival. Her career has taken her across the film and digital media space in both Canada and the U.S., which makes the plot of her debut novel, Pull Focus, published by EWC Press this past fall, all the more perfect.

Our conversation below covers Pull Focus, Walsh’s  process as a writer, inspirations from her time in media, what it takes to write fiction, and more.

ROOM: Was there ever a moment where you thought you should shelve it [Pull Focus]? Or did you feel like this is something you had to follow through on?

HELEN WALSH: I did. I started the first draft of Pull Focus 10 years ago, it takes a long time, especially when you’re also working full time, so it went through multiple drafts. I was always committed to following through, but the nibbling of self-doubt is a known phenomenon among people who write. I think it’s often hard, and in my experience, particularly for women, to give themselves permission to have self-confidence. It wasn’t until a friend of mine, Priscilla Uppal, mentored through diaspora dialogues, took me for lunch one day and said, “look, you’re always going to be busy, you’re always going to be running things, but if you want to write fiction, I will be your coach, and you will help me raise money for New York University.” Then I was fortunate after Priscilla Uppal that several of the people who had mentored through Diaspora Dialogues, David Layton and Rabindranath Maharaj, offered at various points to be readers and to give me critical feedback, which was the community I needed to say that I could do this.

ROOM: What is the rest of your writing process like, outside of having your community be that soundboard for you?

HW: I try not to look at any news I find. I can read a little bit in the morning, but I find that my brain has to be a creative brain before it can be a work-brain. And then, around 11:00-ish, I transition into the workday. Since the book came out, that’s a combination of some marketing stuff and Diaspora Dialogues work, which goes till about seven-ish. And then I make dinner, and after it starts all over again.

ROOM: Does your original idea for Pull Focus match up more or less to the finished product?

HW: I’m always interested more in character and the relationship of characters to each other and the world in which they inhabit than the actual plot details. There’s a lot of plot in this book. The idea of a woman, the ground shifts beneath her, and suddenly she is looking at everything and everybody in her life with suspicion—that was always the starting point, that was the impetus for it. The character of Jane was the same, and Jane’s relationship to the world and the people around her [stayed the same], but the people around her, the plot details, with each subsequent draft changed slightly or added to.

ROOM: As a fiction writer, are there any other mediums you have written in or would you like to write in? And why do you think the character of Jane belongs more in the fictional world that you created versus another medium?

HW: In some of the texts, I wrote the camera shot [in] because I was seeing this as a woman moving through this world. As I kept going, more characters showed up, and more plotlines showed up. I actually just storyboarded it. I got a big cardboard thing, had a square for every chapter, and I had colour-coded stickies. I’m a big fan of T.V. writer Shonda Rhimes. I once read an interview with her about how she did [writing], and I thought, “well, that sounds good for her,” and that was helpful. I always saw [Pull Focus] as a moving image and a novel.

RW: Your book, in a way, is an answer to our current cultural moment. While working on this book, how did you feel with the MeToo movement in the background and a new wave of activism against sexual violence?

HW: It was a shock, also kind of validating. With social justice, the focus is first on the individual before getting to the structural. Somehow it’s easier for people to imagine individual ways to get justice versus the kind of tearing-down-structural stuff one needs to do. And this conversation has been more about white women than racialized women. So there are all kinds of big questions that have not been unpacked since 2017. I think it’s coming, and I think there’s a whole lot more to be done.

ROOM: Do you have any sort of reservations about having your book released at this time?

HELEN: You know, you have to play the hand you’re dealt, right. At its core, the book is partly about gender and power, and one manifestation of that is sexual harassment and sexual violence… I don’t believe in five years that we won’t still be talking about this. And then, in terms of the timing, it’s not fun to bring out a book in the middle of a pandemic when the world is still trying to figure out what it means? [Like] will there be festivals? Will it be virtual or not?

ROOM: Is there any particular advice you would give to young women authors, specifically, who want to publish fiction or feminist fiction? Do you have any words of advice from them?

HW: I’d written maybe 50 or 60 pages at the end of 2019. And then, I didn’t write for a couple of months. Then a lockdown happened, and my friend started a Facebook group, which I’m still part of. It was a place where we would all get together collectively for an hour, sign in, and say, “Okay, we’ll spend the next hour together writing.” When you do that enough, an hour turns into two, which turns into three, and once you’re in the rhythm, you’re in the rhythm. So through that exercise last year, in just seven days, I realized how easy it is to write a novel when you’re holding the plot and your characters in your head every day, even for two hours a day. It’s so much easier because it’s coherent. And my advice? Trust your own voice, and know that your voice needs to be heard, that your story is important, and that you telling your story is important. And get as much creative feedback as you can, but knowing that you need to trust the people you’re getting creative feedback from, and need to manage that process emotionally. Sometimes it can be too much, sometimes you can let them override your own sense of yourself, but get some feedback, whether that’s from a program like ours [Diaspora Dialogues], an MFA program, if that’s what you want to do, your public library’s free Writer in Residence program. Find creative input you trust, and then take [your] book as far as you can yourself before sending it out. Trust yourself.

Helen Walsh is the founder and president of Diaspora Dialogues, Canada’s premier literary mentoring organization. Formerly the publisher of the Literary Review of Canada and a founding director of Spur, a national festival of politics, arts, and ideas, Walsh spent five years working as a film/digital media producer in L.A. and New York. She lives in Toronto, Ontario.

Furqan (pronounced Fur-khan) Mohamed (she/her) is a Black Muslim student and writer. She lives, works, and learns in Toronto, which sits on the traditional territories of the Mississaugas of the Credit, the Anishinabek, Huron-Wendat, and Haudenosaunee peoples. Her work centers around culture and social justice and is often inspired by her diaspora, community, and the stories that can stem from shared human experience.

She currently serves as Culture Editor for mimp Magazine. Her poetry and essays have appeared online and in print for various publications, such as mimp, Feels Zine, Toronto Life, Maisonneuve, Return Trip, and Room Magazine, among others. Furqan is a former Journalism Fellow at The Local Magazine. She is currently studying as an undergraduate student at the University of Toronto.